Bottas leads 3rd practice for British GP ahead of qualifying 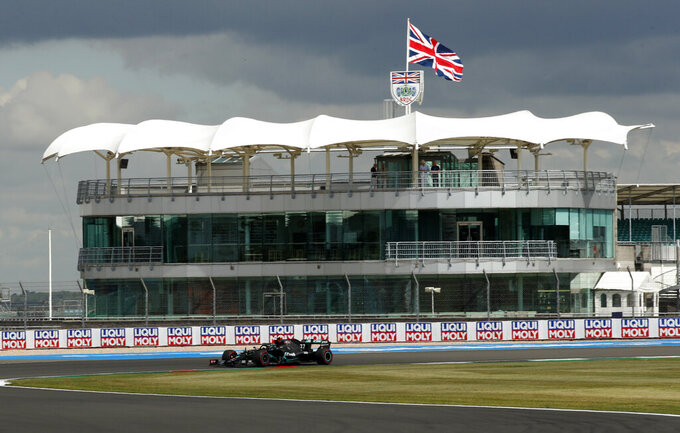 SILVERSTONE, England (AP) — Valtteri Bottas posted the fastest time in third and final practice for the British Grand Prix ahead of qualifying later on Saturday.

It was another frustrating session for his Ferrari teammate Sebastian Vettel, who managed only the 14th-fastest time and again had to come into the garage for repairs after a problem with the car's pedals on Friday.

Hamilton is aiming for a record-extending 91st pole position on a track where he holds the record with six wins. He needs five more wins to equal Michael Schumacher's F1 record of 91.

Nico Hulkenberg was ninth driving for Racing Point as a last-minute replacement for Sergio Perez, who is in quarantine after testing positive for the coronavirus following a trip back to Mexico in between races because his mother had an accident.

Team principal Otmar Szafnauer said Perez was entitled to go despite Mexico having the world's third-highest number of deaths from COVID-19 — nearly 47,000.

“We’ve got no clauses in the contract where he’s got to ask permission to go back to his family ... Our philosophy is we take all the precautions necessary in light of where we’re travelling and if we do take those precautions, I’m confident that we won’t get the virus," Szafnauer said. "We just need to now forensically look back and try to ascertain how Checo became infected and make sure that we cover that off in the future.”

The fourth race of the season is again being held without fans because of virus restrictions in place.

“Without the fans, it is really weird. The British Grand Prix, since I was a kid, was always a massive thing, it was almost like a festival and turning up at the circuit with nobody here is quite peculiar,” Red Bull team principal Christian Horner said. “It doesn’t feel like a British Grand Prix in that respect … the atmosphere obviously isn’t here."

Like Austria, Britain is hosting back-to-back races at Silverstone.