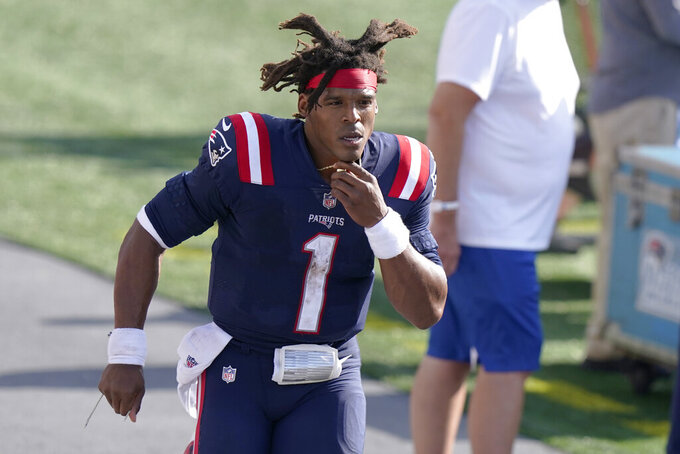 The first of Brady’s interceptions led to Kamara’s 6-yard touchdown run. The second pick thrown by the new, 43-year-old Bucs QB — who left the New England Patriots in free agency after 20 years and six Super Bowl triumphs — was returned 36 yards for a touchdown by Janoris Jenkins.

Neither quarterback was statistically exceptional in this first-ever NFL game featuring two quarterbacks in their 40s. The 41-year-old Drew Brees passed for 160 yards and two TDs, but he also avoided critical mistakes. He did not turn over the ball and took only one sack. His first TD pass was a dump-off to Kamara from 12 yards. In the fourth quarter he hit free-agent signing Emmanuel Sanders for a 5-yard score.

Few witnessed this historically significant quarterback matchup in person, with government leaders and the Saints having agreed that no fans should attend the opener amid the coronavirus pandemic. That turned the normally deafening 73,000-seat Superdome into more of an echo chamber. When Wil Lutz’s field goal put New Orleans up 17-7, the squeaking of pulleys could be heard across the stadium as the net behind the goal post was lowered.

Robert Woods had six catches for 105 yards to help the Rams improve to 4-0 in season openers under coach Sean McVay and spoiled the debut of Mike McCarthy, Dallas’ first new head coach in a decade.

Dak Prescott passed for 266 yards and a touchdown, but Dallas managed three points on its six drives in the second half. Michael Gallup made a long catch that would have put Dallas in field goal range with 21 seconds left, but was called for offensive pass interference for contact with Jalen Ramsey.

SANTA CLARA, Calif. (AP) — DeAndre Hopkins had a career-high 14 catches for 151 yards in his Arizona debut and set up Kenyan Drake’s 1-yard TD run with 5:03 to play.

Kyler Murray threw for 230 yards and a touchdown and ran for 91 yards and another score to help the Cardinals overcome a pair of fourth-quarter deficits to beat the defending NFC champion 49ers in a smoky opener at an empty stadium.

Jerick McKinnon, in his first game in more than two years, caught a 5-yard TD pass from Jimmy Garoppolo to give San Francisco a 20-17 lead with 8:38 to play before Murray led a late comeback. His 33-yard pass to Hopkins got the ball down to the 1 and Drake ran it in on the next play to give Arizona the lead.

CINCINNATI (AP) — Heisman Trophy winner Joe Burrow ran 23 yards untouched for a touchdown — the best moment of his NFL debut — but the Chargers roughed him up and rallied.

Playing in empty Paul Brown Stadium, Burrow got his first snaps in the NFL and learned the hard way what it’s like to face a tough front line.

The Bengals also had an in-character finish. A.J. Green was called for offensive interference in the end zone in the closing seconds, and Randy Bullock missed a 31-yard field goal try with 2 seconds left and pulled up lame.

A line anchored by Joey Bosa and Melvin Ingram III held the quarterback from national champion LSU to 23 of 36 passing for 192 yards with three sacks and a costly interception. Twice, Burrow overthrew open receivers for what would have been touchdowns.

After falling behind 17-0 following a pair of touchdown passes by Carson Wentz, Washington relied on a punishing defense and opportunistic offense in its first game since owner Dan Snyder finally agreed to change the team’s name and former employees alleged sexual harassment in the organization.

Rivera lived up to his “Riverboat Ron” nickname earned in nine seasons with Carolina. In his first game after finding out he has a form of skin cancer, Rivera went for it on fourth-and-1 from the Eagles 5 with the score tied midway through the fourth quarter. Barber ran for the first down and then scored from the 3 to give Washington a 24-17 lead.

Although the COVID-19 pandemic kept the seats empty and the play was sloppy following a preseason without any games, two constants prevailed: Jackson was the focal point of a high-powered offense and the Browns lost another opener.

Facing a Cleveland secondary depleted by injuries, Jackson completed 20 of 25 passes and racked up a team-high 45 yards on the ground. A year ago, the multi-faceted star set an NFL single-season record for yards rushing by a quarterback and threw 36 TD passes.

The Browns were incapable of stopping him. As a result, Cleveland still hasn’t opened with a victory since 2004.

Newton rushed for 15 times for 75 yards and threw for 155 yards, leading a Patriots offensive attack that did most of its damage on the ground in their first game since the departure of Brady to Tampa Bay as a free agent. Sony Michel added a touchdown for New England, which had 217 of its 357 yards on the ground. Newton was 15 of 19 passing.

Miami struggled for most of the game offensively and lost top receiver DeVante Parker, who left in the third quarter with a hamstring injury. Ryan Fitzpatrick was 20 of 30 for 191 yards and three interceptions. Miami was held to 269 total yards.

MINNEAPOLIS (AP) — Aaron Rodgers took full advantage of the young cornerbacks and the empty stadium in Minnesota, beginning his 13th season as Green Bay’s starting quarterback by passing for 364 yards and four touchdowns.

Davante Adams was predictably the biggest beneficiary with a career-high, franchise-record-tying 14 catches for 156 yards and two scores. Marquez Valdes-Scantling and Allen Lazard each reached the end zone, too, as Green Bay had its way with a Minnesota defense renovated this year out of salary-cap necessity as hefty new contracts were given to quarterback Kirk Cousins and running back Dalvin Cook.

Aaron Jones rushed for 66 yards and a touchdown for the Packers, who posted their highest score against the Vikings since a 44-31 victory at the Metrodome on Oct. 27, 2013.

Cook rushed 12 times for 50 yards, two touchdowns and two 2-point conversions. Adam Thielen caught six passes for 110 yards, two scores and another 2-pointer, but Cousins underthrew him in the final minute of the first half. Jaire Alexander, who also had a safety on an untouched cornerback blitz in the second quarter, made the bobbling interception.

Then Rodgers hit Valdes-Scantling on a fade route up the right sideline with rookie Cameron Dantzler in position but too late to turn for the ball, a 45-yard touchdown that gave Green Bay a 22-7 lead with 11 seconds left in the first half.

ATLANTA (AP) — Russell Wilson was cooking right from the start, throwing four touchdown passes. With the Falcons not allowing fans for at least their first two homes games because of the coronavirus pandemic, the Seahawks took advantage of what was essentially a neutral site to pull away in the second half.

Wilson completed 31 of 35 passes for 322 yards, throwing a pair of TD passes in the first quarter as Seattle built a 14-12 halftime lead, adding two more in the third quarter to put the Falcons away.

The biggest one came after the Falcons made what looked to be a crucial stop, leaving the Seahawks with fourth-and-5 at the Atlanta 38. The offense stayed on the field, but instead of going for the first down with a short throw, Wilson lofted one to DK Metcalf, who was streaking toward the end zone.

On the ensuing possession, Atlanta attempted a fake punt on fourth-and-2 from its 33. Blocking back Sharrod Neasman took a direct snap and had enough for the first down on a run up the middle, only to fumble the ball. It was recovered by Seattle’s Freddie Swain at the 36. Five plays later, Wilson zipped his fourth TD pass of the game.

Detroit drove to the Chicago 16 with a chance to win, and rookie running back D’Andre Swift dropped a pass in the end zone. Matthew Stafford threw another incomplete pass as time expired to complete the collapse.

Trubisky threw three touchdown passes in the fourth quarter to help Chicago come back from a 17-point deficit. It looked familiar to Lions fans: Detroit opened last season by blowing an 18-point lead at Arizona and settling for a tie. That began a trend that saw the team fail to stay ahead during a season that ended with just wins.

Trubisky, who held off Nick Foles to keep his job, shook off a shaky start to complete 20 of 36 attempts for 242 yards with three touchdowns, including short passes for scores to Jimmy Graham and Javon Wims.

Stafford was 24 of 42 for 297 yards with a TD pass to T.J. Hockenson in the third quarter — and an interception that gave Chicago a great chance to take its only lead of the game. Adrian Peterson ran for 93 yards on 14 carries in his Detroit debut, just four days after signing with the team.

The Jaguars entered Week 1 as the NFL’s biggest home underdogs, with talk of tanking being the most prevalent preseason topic surrounding the revamped team. The tempered expectations may have contributed to the team only being able to distribute about 14,000 tickets for the league’s lone game played with fans in the stands Sunday.

Minshew gave the sparse crowd plenty to celebrate. The second-year pro completed 19 of 20 passes for 173 yards and no turnovers. He connected with DJ Chark, rookie Laviska Shenault and Cole for scores — and looked sharp all day.

Undrafted rookie running back James Robinson accounted for 90 yards, including 62 on the ground.

The Colts have themselves to blame for the loss. Coach Frank Reich went for it on fourth down from the 3-yard line early and failed to get points. Rookie kicker Rodrigo Blankenship hit the left upright from 30 yards out, another missed opportunity.

And Rivers looked solid at times, but also had some questionable throws with his new team.

Jacobs’ 6-yard run around the right end with 4:14 left put the Raiders ahead for good after they’d surrendered a 12-point fourth quarter lead.

Carolina had a chance to take the lead, but the Panthers handed off to fullback Alex Armah — instead of All-Pro Christian McCaffrey — on fourth-and-inches at midfield, He was stopped at the line, turning the ball over on downs with 1:11 left. McCaffrey racked up 134 yards from scrimmage and scored two touchdowns for Carolina.

Teddy Bridgewater, who replaced Cam Newton as the starting QB, finished 22 of 34 for 270 yards and one touchdown in his Carolina debut. Robby Anderson, a free agent pickup from the Jets, had six catches for 115 yards and a go-ahead score.

John Brown had six catches for 70 yards and a touchdown, and Stefon Diggs finished with eight catches for a team-leading 86 yards in his Bills debut after being acquired in a trade with Minnesota in March.

Buffalo’s defense was a force despite losing Matt Milano to a hamstring injury in the second quarter. Middle linebacker Tremaine Edmunds did not return after hurting his shoulder while trying to tackle Jets receiver Jamison Crowder, who scored on a 69-yard touchdown catch and run.

The Jets finished the game without starting running back Le’Veon Bell, ruled out in the second half due to a hamstring injury.