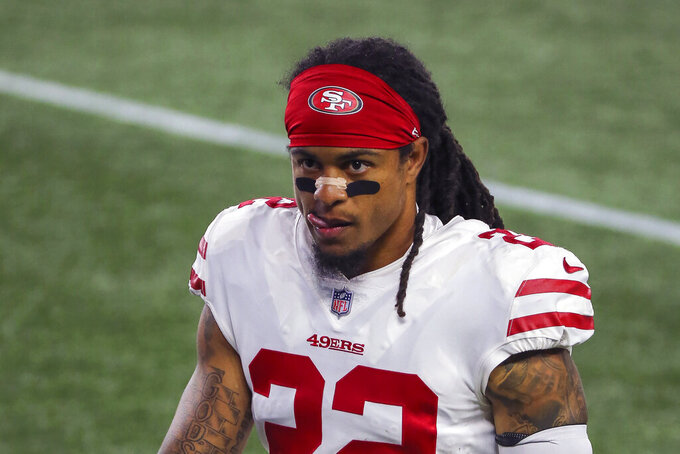 FILE - San Francisco 49ers cornerback Jason Verrett (22) walks off the field following an NFL football game against the New England Patriots in Foxborough, Mass., in this Sunday, Oct. 25, 2020, file photo. The San Francisco 49ers are bringing back cornerback Jason Verrett on a one-year deal. General manager John Lynch announced the deal on Monday, March 15, 2021, shortly after Verrett was allowed to begin talking to other teams about a potential deal. NFL Network reported the contract has a $5.5 million base value with the chance to make more. (AP Photo/Stew Milne)

Just as he had done several times in New England, Brady reworked his big-ticket contract last week to free up money in free agency. The Buccaneers used it to keep David, and on Monday, the first day of “legal tampering” before the NFL's business year begins on Wednesday, the 28-year-old Barrett agreed to a four-year, $72 million contract with $36 million guaranteed, agent Drew Rosenhaus confirmed.

Meanwhile, back in Brady's former stomping grounds, the Patriots were spending wildly in an attempt to recapture the glory he produced before heading south last season.

New England opened its vaults wider than any other team on Monday, something unusual for a club that normally avoids chasing the most expensive free agents. Of course, the Patriots went 7-9 without Brady in 2020.

Judon, 28, will get a four-year, $56 million pact with $32 million guaranteed, a person with knowledge of the contract told The Associated Press. Smith, 25, will be paid $50 million over four years to try to fill the void created when Gronkowski retired after the 2018 season — only to return last year to reunite with Brady in Tampa Bay.

The 26-year-old Godchaux gets $16 million for two years, with $9 million guaranteed. Mills, soon to turn 27, comes in at four years for $29 million, also guaranteed $9 million.

Clearly, the salary cap that decreased by about $16 million this year due to lost revenues because of the coronavirus pandemic hasn't prevented New England from diving headfirst into the free agency waters.

But they let perhaps the best offensive lineman in this crop get away, as 28-year-old guard Joe Thuney agreed to a five-year, $80 million contract with Kansas City. It might seem a stretch to think the Chiefs have problems on offense, but anyone who saw their line fall apart in the Super Bowl recognizes the value of adding Thuney.

The other three AFC West teams were busy as well.

The Raiders, who have suffered defensively since trading Khalil Mack in 2018, agreed to a two-year contract with edge rusher Yannick Ngakoue. They are last in the NFL with 66 sacks and 357 pressures, according to SportRadar, since the trade.

Ngakoue has the 12th-most sacks (45 1/2), third-most strip sacks (15), sixth-most quarterback pressures (190) and second-most forced fumbles (18) in his five pro seasons, though he has slumped the last two years.

The Chargers went with an offensive line upgrade, center Corey Linsley, an All-Pro with Green Bay last season. Linsley allowed a league-low four pressures last season among centers who played 13 or more games, while LA’s Dan Feeney was tied for the most at 33. Linsley, 29, spent seven seasons with the Packers.

— The Rams agreed with pass rusher Leonard Floyd on a four-year deal. Floyd, who is coming off the best season of his five-year NFL career, signed last April after the Bears released him. The outside linebacker finished 10th in the league with 10 1/2 sacks while racking up 55 tackles and 19 quarterback hits. He also excelled against the run while starting all 16 games.

— Cleveland might have found a gem in Rams safety John Johnson III. The 25-year-old playmaker is a strong run defender who had four interceptions in 2018 and has eight over a career spanning 48 starts. His three-year deal with the Browns reportedly is valued at $33.75 million, with $24 million guaranteed.

— San Francisco re-signed 29-year-old cornerback Jason Verrett for one year. He has been plagued by injuries throughout his career but stayed healthy in 2020 and excelled for the 49ers. Verrett started 13 games with two interceptions and seven passes defensed and was one of the top-graded cornerbacks in coverage.

— Detroit brought back 25-year-old Romeo Okwara, who had a career-high 10 sacks last season in his third year with the Lions and fifth in the NFL. He has been a rare steady performer on a weak defense in Detroit and got a three-year deal.

— Arizona re-signed linebacker Markus Golden for two-years. The 30-year-old Golden has spent most of his career with the Cardinals after being selected in the second round of the 2015 draft. He played with Arizona from 2015-18 before signing with the New York Giants and was traded back to the Cardinals midway through the 2020 season and played well in Arizona.

— Baltimore agreed with guard Kevin Zeitler, 31, on a three-year, $22 million contract. The Ravens have needed help at the position since perennial All-Pro Marshal Yanda retired after the 2019 season. Zeitler, a nine-year veteran, was released by the New York Giants last week.

—The Jets, with as much money to spend as almost any team, went for Bengals defensive end Carl Lawson, Titans wide receiver Corey Davis and linebacker Jarrad Davis.

The 25-year-old Lawson got a three-year contract. He has 20 sacks in four seasons with weak Cincinnati and joins a promising defensive line in New York that includes defensive tackle Quinnen Williams.

Corey Davis, 26, could become the Jets' No. 1 wideout. His deal is worth $37.5 million over three years, $27.5 million guaranteed. Jarrad David had fallen out of favor in Detroit. The price tag reportedly is $7 million for one year.

—The Cowboys are set to bring back defensive tackle Antwaun Woods and a pair of receivers lower on the depth chart in Cedrick Wilson and Noah Brown. The team reported on its website that Woods and Wilson were expected to be offered tenders as restricted free agents while Brown had agreed to a one-year contract as an unrestricted free agent.