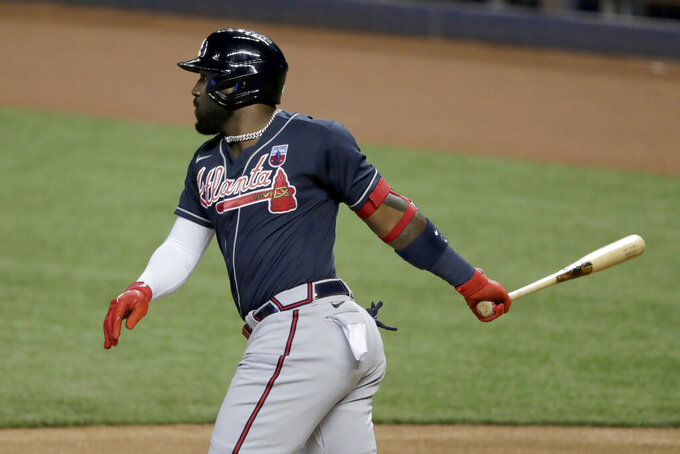 FILE - In this Aug. 16, 2020, file photo, Atlanta Braves' Marcell Ozuna watches his single during the first inning of a baseball game against the Miami Marlins in Miami. The Braves are bringing back Ozuna, signing the slugger to a $65 million, four-year contract. The Braves announced the deal for the 2020 NL home run and RBI leader Friday night, Feb. 5, less than two weeks before pitchers and catchers are set to report for spring training. The deal includes a fifth-year club option for $16 million with a $1 million buyout. (AP Photo/Lynne Sladky, File)

ATLANTA (AP) — Marcell Ozuna is returning to Atlanta, with or without the designated hitter.

The Braves reclaimed Ozuna's power bat for the middle of their lineup on Friday night by signing the slugger to a $65 million, four-year contract.

Atlanta announced the deal for the 2020 National League home run and RBI leader less than two weeks before pitchers and catchers are set to report for spring training.

Ozuna gets $12 million this year, $16 million in 2022 and $18 million in each of the final two seasons. The deal includes a fifth-year club option for $16 million with a $1 million buyout. Ozuna will donate 1% of salary each season to the Braves' charitable branch.

The Braves made the major commitment to Ozuna despite having no assurance there will be a DH in the NL in 2021. He flourished in the role in 2020, helping the Braves win the NL East and come within one win of advancing to the World Series. The Braves lost to the Los Angeles Dodgers in Game 7 of the NL Championship Series after leading the series 3-1.

Ozuna's value to the team, in the clubhouse and as lineup protection for 2020 NL MVP Freddie Freeman, was crucial to the team's hopes of winning a fourth straight NL East title and making another run for the World Series.

Ozuna, who has played with three teams over the past four seasons, said he was glad to settle down in Atlanta.

“Since I was a kid I would dream about this day,” he wrote on his Instagram account. “The day that I could call a place home. Through ups and downs I’ve maintained my faith in this moment. Today I can officially say I'M BACK!!”

The deal drew immediate approval from Freeman, who posted on his Twitter account “love this!! Let's go!”

The 30-year-old Ozuna signed an $18 million, one-year free agent deal with Atlanta last year, and then put together his best offensive season during the pandemic-shortened campaign. He batted .338 with 18 homers and 56 RBIs, narrowly missing out on a Triple Crown. He started all 60 games, posting a career-best 1.067 OPS and finishing sixth in NL MVP voting.

Ozuna invigorated the Braves with his various celebrations, which included the “mix it up” twirling of his hands after big hits and taking a “selfie” of himself rounding the bases after a homer in the NL wild card series.

“My power came because I’m healthy,” he said after the season. “I just came ready and give my best to my teammates and let’s go play.”

Ozuna was respected and liked by teammates, including Ronald Acuña Jr. and Ozzie Albies.

Ozuna would open the season as Atlanta's projected starter in left field if the DH is not reinstated.

The NL adopted the DH last year as part of baseball's health and safety protocols for playing through the pandemic. Ozuna made 39 starts as Atlanta’s primary DH.

Major League Baseball proposed renewing the universal DH in talks with the players association last week, but the union rejected the proposal, which also would have delayed the start of the regular season and expanded the postseason field. It's still possible the sides agree to restore the DH this year, or during negotiations for a new collective bargaining agreement after this season.

With Ozuna locked in, Atlanta will return essentially the same lineup that finished second in the majors with 348 runs last year — one behind the World Series champion Dodgers. The Braves have also added to the rotation by signing veterans Charlie Morton and Drew Smyly.