Breyer 'basically optimistic' about US despite polarization 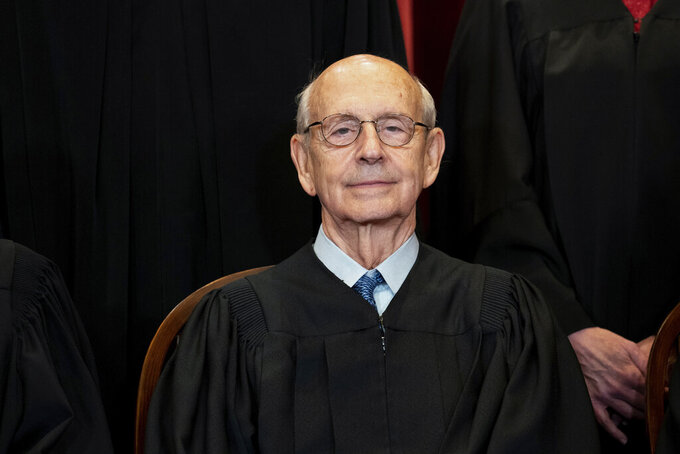 FILE - In this April 23, 2021, file photo, Supreme Court Associate Justice Stephen Breyer sits during a group photo at the Supreme Court in Washington. Breyer is talking with the head of the National Constitution Center in Philadelphia and taking questions from students on Friday, May 28. (Erin Schaff/The New York Times via AP, Pool)

WASHINGTON (AP) — The country may be increasingly divided along partisan lines, but Supreme Court Justice Stephen Breyer said Friday that he remains optimistic that America's system of democracy will continue to work.

“I am basically optimistic, and I don't know how much that's justified,” Breyer said.

The 82-year-old justice, who has spent more than 25 years on the court, said that when he worked on Capitol Hill, his former boss, Sen. Edward Kennedy, used to say that the country swings, “sometimes to extremes in one way, sometimes to extremes the other way, but it sort of rights itself eventually." Breyer suggested he agrees.

The justice made the comments in a video appearance as part of an event for students hosted by Philadelphia’s National Constitution Center. Breyer, who spoke from his book-lined Supreme Court office, was not asked about recent calls by some for his retirement.

Whether Breyer will step down has been the subject of speculation for months. Some liberals have said he should retire to allow President Joe Biden to choose his successor while Democrats have narrow control of the Senate.

Breyer has been mum about his plans, but he has recently cautioned against thinking of the court as another political institution, a sentiment he repeated Friday.

Breyer also discussed why he rarely votes to overturn past decisions. That's a fraught issue on the current court with the addition of more conservative justices seen as being potentially more willing to reexamine past decisions, including landmark abortion rights rulings. Breyer said following precedent is important.

“Part of what it’s doing is to allow people to plan their lives. ... The law might not be perfect. But if you’re changing it all the time, people won’t know what to do. The more you change it, the more people will ask to have it changed,” he said.

Breyer also talked about finding common ground. He noted that, during the coronavirus pandemic, people in his neighborhood came together to help one another, and he said there are “dozens of parts of public life where people can work together.”

“I think we still have that ability and that talent. And so I’m optimistic,” he said.

Lawmakers, he said, can come together, too, if that's what their constituents want. “When enough people in the country say, ’Look, what I really want is what we learned in the fifth grade, that people work together,' they’ll get it,” he said.

Breyer is the most senior member of the court's liberal minority following Justice Ruth Bader Ginsburg's death in September. Ginsburg's replacement by Justice Amy Coney Barrett has given conservatives a 6-3 majority on the court.

Asked Friday by National Constitution Center head Jeffrey Rosen what he's learned over his decades on the court, Breyer said he's learned he has “less power to persuade people than I thought I might.” Still, he called doing the job “a privilege.”

The center says that more than 5,000 people attended the virtual event and that participants ranged in age from fourth graders to college students and others, including some from outside the United States.

Rosen also asked Breyer about his daily routine. Breyer said that, during the pandemic, he had been working from Cambridge, Massachusetts. He said he would get up at 7 or 7:30 a.m. and do some stretching before having a breakfast of tea and fruit in the garden. He said he would talk to his law clerks every day on Zoom, ride a stationary bike in the afternoon and watch the television show “M-A-S-H” in the evening. Breyer also talked about meditating, which he said his wife got him into.

“It does, in fact, calm you down. It does make you relax," he said, adding that it makes him feel better. “I recommend it.”

Students asked about his favorite majority opinions and dissents. In response, Breyer mentioned only dissents, one in 2007 in a case involving affirmative action, as well as a 2015 dissent in which he suggested it was time to reconsider the death penalty. More recently, he said he enjoyed a case in 2017 about copyright protection for the designs on cheerleading uniforms. Breyer disagreed that the designs could be protected, but the case forced him to learn more about the worlds of art and fashion, he said.