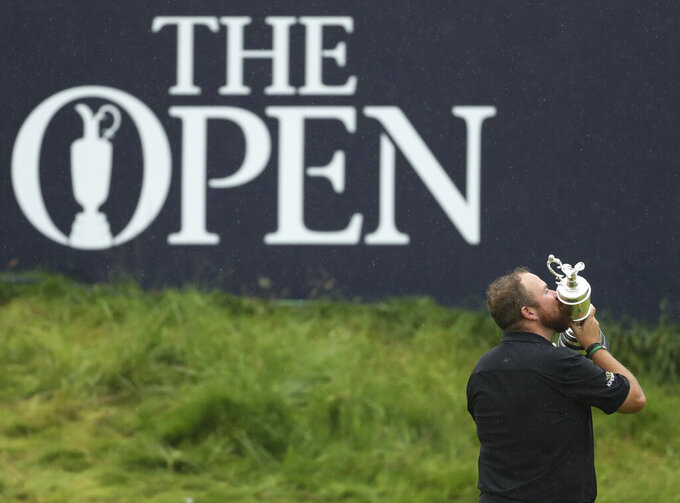 FILE - In this file photo dated Sunday, July 21, 2019, Ireland's Shane Lowry holds the Claret Jug trophy after winning the British Open Golf Championships at Royal Portrush in Northern Ireland. The R&A announced Monday Dec. 7, 2020, that the British Open will be played at Royal Liverpool in 2023 and at Royal Troon in 2024, after the 2020 Championships were cancelled due to the coronavirus pandemic. (AP Photo/Peter Morrison, FILE)

The tournaments were rescheduled following the cancellation of this year's Open at Royal St. George’s because of the coronavirus pandemic. It was the first time since 1945 that the tournament was canceled.

The famous Kent links will host the British Open from July 11-18, 2021, as previously announced. St Andrews remains the site of the 150th Open, scheduled in 2022.

The British Open has been staged 12 times at Royal Liverpool, most recently in 2014 when Rory McIlroy won the Claret Jug.

Royal Troon in Scotland has hosted nine times. Henrik Stenson won there in 2016.

“We are grateful to everyone involved at the clubs and at our partner organizations for supporting our plans and showing flexibility to adapt their own schedules," R&A chief executive Martin Slumbers said. “We can now look forward to seeing the world's best players competing at these outstanding links courses in 2023 and 2024.”

The British Open is golf’s original championship, first played in 1860.