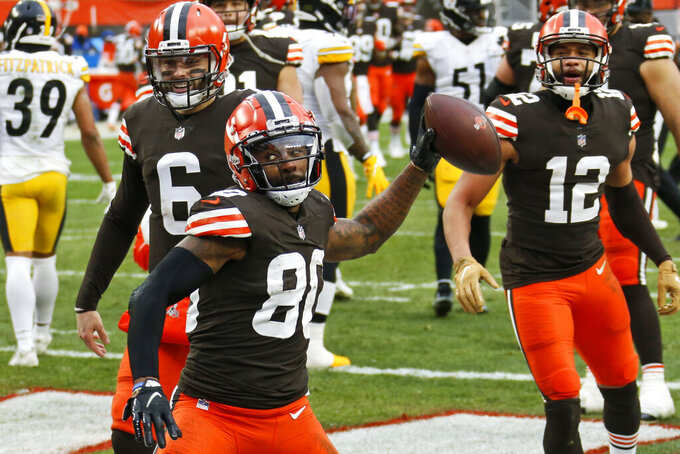 Cleveland Browns wide receiver Jarvis Landry (80) celebrates after scoring a 3-yard touchdown during the second half of an NFL football game against the Pittsburgh Steelers, Sunday, Jan. 3, 2021, in Cleveland. (AP Photo/Ron Schwane)

CLEVELAND (AP) — They won't have their coach. They've barely practiced, and when they make their first playoff appearance in nearly 20 years — at Pittsburgh, where they've lost 17 straight games — on Sunday, the Cleveland Browns will have backups at key positions.

COVID-19 has tackled them hard.

What else is new?

“We’ve been in that role all year,” defensive end Myles Garrett said after the team finally practiced Friday. “We’ve in that role since I’ve been here. So, nothing has changed. Our backs are against the wall and we’re going to fight out of it — fight off of it.”

Stuck in their homes due to COVID-19 protocols the past two days, the Browns practiced after the NFL finished contact tracing that began earlier in the week when coach Kevin Stefanski tested positive along with Pro Bowl guard Joel Bitonio and three others.

While Stefanksi remained in his basement, his team resumed normal activities — by 2021 standards — at its training facility. The Browns had a 90-minute indoor workout during which they finally got to see the game plan come to life.

“It was good. We needed at least a day under our belts to get everything refined and make sure we look sharp,” Garrett said. “Essential to be out there every time. You have to be able to see how the looks are, how everything times up and see if it is as effective as you think it is on paper.”

Garrett was listed on Cleveland's injury report as questionable with a shoulder issue, but Stefanski is confident the newly named first-time All-Pro will play Sunday.

It's still not clear if the Browns will have All-Pro right tackle Jack Conklin, who didn't practice due to an illness. Already missing Bitonio, Cleveland can't afford to be without Conklin against T.J. Watt, Cam Heyward and the rest of Pittsburgh's front.

Stefanski, who can't be on the sideline Sunday, wouldn't say whether Conklin is experiencing COVID-like symptoms.

League guidelines stipulate that if someone has symptoms consistent with COVID-19, that person must isolate. As long as Conklin continues to test negative over the next two days, he’ll be eligible to play against Pittsburgh's rugged defensive line.

Eight players are on the COVID-19 reserve list, including Bitonio, top cornerback Denzel Ward, safety Ronnie Harrison and wide receiver KhaDarel Hodge. It's possible Ward could be back.

The Browns will fly to Pittsburgh rather than travel by bus. There's more room to socially distance on a plane.

It's been another week of delays and distractions for the Browns, who haven't necessarily impressed the Steelers with their turnaround.

Earlier this week, Pittsburgh wide receiver, logo dancer and TikTok enthusiast Juju Smith-Schuster added some spice to Sunday's matchup with a comment about whether the Browns were better.

“I think they’re still the same Browns teams I play every year. I think they’re nameless gray faces," Smith-Schuster said, parroting a phrase Steelers coach Mike Tomlin often uses for opponents. “They have a couple good players on their team, but at the end of the day, I don’t know. The Browns is the Browns.

Garrett wouldn't bite when asked if he wanted to respond to Smith-Schuster.

Garrett, though, knows the only way the Browns can truly show they're different is to beat the Steelers. Cleveland hasn't won at Heinz Field since 2003.

"We will have to prove it when we see them on Sunday,” he said.

On Thursday, Browns quarterback Baker Mayfield said he hadn't thrown a football since last weekend, when Cleveland clinched the AFC's No. 6 seed by beating the Steelers and setting up the second game in eight days with their chief rival.

Stefanski said he's been impressed with his quarterback's focus ahead of his playoff debut.

NOTES: DT Sheldon Richardson (neck) is also listed as questionable, but Stefanki also believes he'll be ready. ... Rookie WR Donovan Peoples-Jones cleared concussion protocol and practiced. He was hurt in last Sunday's win over Pittsburgh. ... It appears Michael Dunn, who was on the practice squad until recently, will replace Bitonio. “Michael is like a lot of players, we may be counting on him Sunday, so we trust in their preparation,” Stefanski said.