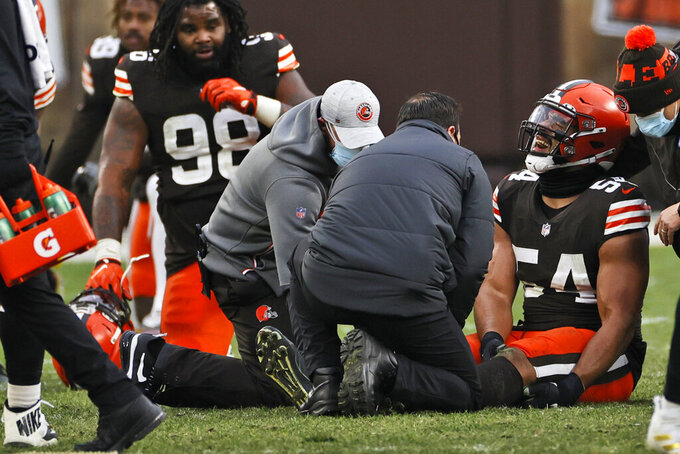 Cleveland Browns defensive end Olivier Vernon (54) grimaces after an injury during the second half of an NFL football game against the Pittsburgh Steelers, Sunday, Jan. 3, 2021, in Cleveland. (AP Photo/Ron Schwane) 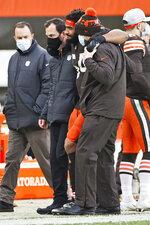 CLEVELAND (AP) — Olivier Vernon stepped up when the Browns needed him. They'll have to do the same.

Cleveland will make its first playoff appearance since 2002 without Vernon after the defensive end ruptured an Achilles tendon in the fourth quarter of Sunday's 24-22 win over the Steelers — a victory that sets up a first-round rematch between the rivals.

“Obviously I’m very disappointed for O.V.,” Stefanski said. “Was playing at a high level. We’re going to miss his leadership.”

Vernon's loss is a major blow to the Browns' defensive front, which will need to put pressure on Ben Roethlisberger to have any shot at ending Cleveland's 17-game losing streak at Heinz Field. The Browns haven't won in Pittsburgh since 2003.

Vernon got his ninth sack this season before getting hurt. As many of his concerned teammates knelt nearby, Vernon didn't put any weight on his leg while being assisted to the sideline and then driven by cart to the locker room.

"I am hurting for my dawg right now,” defensive tackle Larry Ogunjobi said. “That is big brother. Hurting extremely for him. Praying for him. He is in high spirits. He has been a major, major contributor to what we have done this season and helped us win a lot of big games. I can attest to how important his pieces were for this.

"It is hard, but we have that next-man-up mentality.”

On Sunday, the Browns (11-5) were missing top cornerback Denzel Ward, linebackers B.J. Goodson and Malcolm Smith and safety Andrew Sendejo against the Steelers (12-4), who won't be resting Roethlisberger or any starters for the upcoming matchup.

Stefanski declined a chance to update the status on Ward, who tested positive for COVID-19 last week amid a rash of cases on the Browns. It's not yet known if Ward or the others will be able to play in Cleveland's first playoff game since Jan. 5, 2003.

“With all of those guys on that COVID list, I can’t really get into specifics,” Stefanski said. “I will just tell you that we will work through all of that, we will follow the protocols and see where they lead. I am not going to get into the hypotheticals.”

Stefanski also said rookie wide receiver Donovan Peoples-Jones suffered a concussion against the Steelers and is in protocol.

Vernon's injury is a personal blow to the 30-year-old, who came to Cleveland last year in the blockbuster trade with the Giants that brought Odell Beckham Jr. to the Browns. He agreed to restructure his contract this past offseason to stay with the team.

He helped the Browns get back to the playoffs only to sit them out.

When Cleveland was without Garrett for two games in November, Vernon picked up the slack. He had three sacks in a Nov. 22 win over Philadelphia, and forced a fumble the following week in a win over Jacksonville.

“He stepped up his game,” Stefanski said. “A bunch of guys have done that this season, and O.V.’s a great example of that. We were counting on him, we needed him and he stepped up. He’s a leader for the football team in how he plays. O.V. doesn’t say much, but when he talks, I think the guys listen — just goes about his business.”

“Hard to replace. I don’t know if you replace any player, but we need guys to step up.”

Adrian Clayborn will replace Vernon in the starting lineup and Porter Gustin will get more playing time.