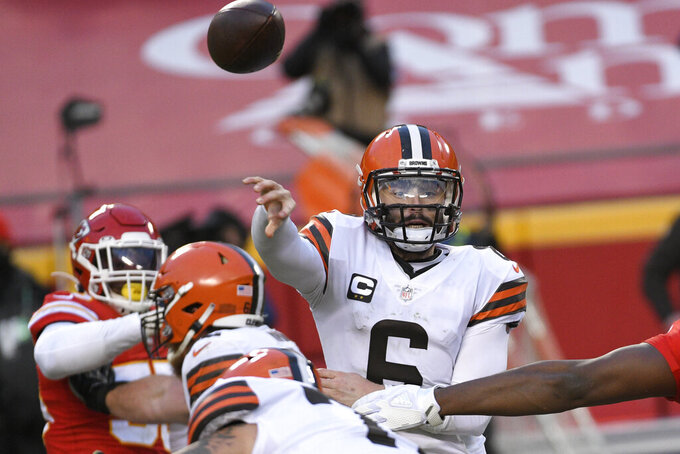 Cleveland Browns quarterback Baker Mayfield throws a pass during the second half of an NFL divisional round football game against the Kansas City Chiefs, Sunday, Jan. 17, 2021, in Kansas City. The Chiefs won 22-17. (AP Photo/Reed Hoffmann)

CLEVELAND (AP) — On their wild ride of an unforgettable, almost unimaginable 2020 season when Zoom calls, masks and contact tracing were daily fixtures, the Browns discovered two things that point to a bright future for an awakened franchise.

They've got the right coach and the right quarterback.

After years of being beaten and beaten down, the Browns have climbed back.

While Sunday's 22-17 loss in the divisional round to the Kansas City Chiefs — and Rashard Higgins' costly fumble on a controversial play at the goal line — felt like so many other painful playoff moments and losses for the Browns and their fans, this one is different.

Not an ending but a beginning.

“We'll be back,” quarterback Baker Mayfield claimed after the Browns, who won 11 games in the regular season and their first playoff game in 26 years, pushed the defending Super Bowl champions to the limit. “We aren't done yet, and that is the best part.”

Mayfield's maturity in his third NFL season, and first working with rookie coach Kevin Stefanski, gives the Browns reason to believe they have entered a period when they should contend for years.

Mayfield improved as much as any player in the league, ending any discussion about whether the Browns should commit to him long term.

“He’s continued to grow as a player and as a person and as a leader,” Browns center JC Tretter said Monday. “That's what you need, and Baker’s growth is not yet done. He’s not a finished product and he’d be the first one to tell you that.”

The Browns are expected to exercise Mayfield's fifth-year contract option this offseason, and the team will explore an extension over the next few months with the 25-year-old quarterback who finished with 30 touchdown passes, nine interceptions and 4,030 yards in 18 games.

Stefanski's role in Mayfield's development while guiding the Browns (12-6) through a season shaped by the COVID-19 pandemic, can't be overstated.

One of his first objectives after coming to Cleveland was to connect with Mayfield, knowing the QB/coach dynamic is essential to success. Stefanski bonded with Mayfield right away and they grew tighter as the year progressed.

Stefanski brought out the best in his young QB, who threw 20 TD passes and only three picks in his last 12 games.

“Once he started getting comfortable with what we were doing and once I was using more concepts that he was comfortable with, he really started playing at a high level,” said Stefanski, among the leading candidates for Coach of the Year honors. “I am proud of the progress he made."

“He did the things we asked him to do,” he said. “He definitely led this football team from Day 1. We have a bunch of ball games to look at with him and find out ways that he can get better, but in terms of the ‘franchise quarterback’ thing, I do not even know necessarily what that means.”

It means everything for a team that went through 29 starting QBs before Mayfield arrived.

Before landing Stefanski, the Browns cycled through six coaches in the past decade.

In Cleveland, there's hope, not hopelessness.

The Browns' defense needs an overhaul.

The linebacking corps needs an upgrade and end Olivier Vernon probably won't be re-signed as a free agent.

Cleveland, which normally picks at the top of the draft, has the No. 26 selection to find help.

While Beckham's talent isn't debatable, there's no denying Mayfield played his best when Beckham wasn't around. His $12.8 million salary for next season becomes guaranteed in March, so it may be tough for Cleveland to trade Beckham while he's rehabbing.

For now, Stefanski made it sound like he wants OBJ in his offense in 2021.

“I'm excited to get him back here," Stefanski said. "I know it was not easy for him being away from his teammates, especially as these games got bigger and into the playoffs. I know he definitely wanted to be a part of it.”

The 30-year-old Vernon tore an Achilles tendon in the Browns’ regular-season finale and probably won't return. Ogunjobi's been solid, but the Browns have depth in the middle with Billings, Sheldon Richardson and rookie Jordan Elliott.

Goodson emerged as a leader in his first season with Cleveland. Then there's Higgins, a fan favorite and go-to target for Mayfield. He had five catches for 88 yards on Sunday, but his fumble while reaching for the goal line before halftime was a major turning point in a game the Browns could have won.