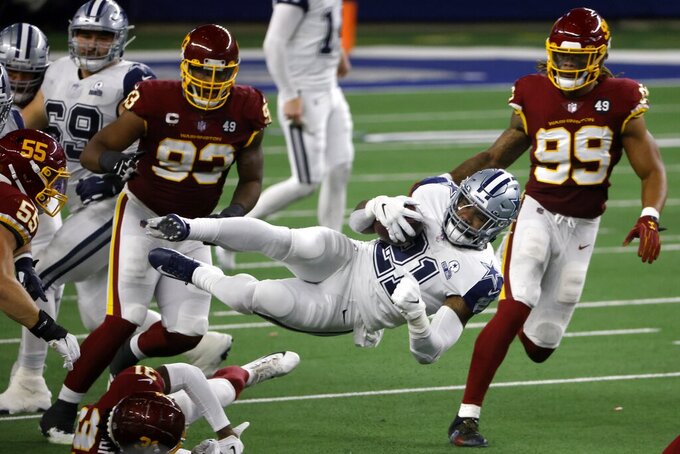 Dallas Cowboys running back Ezekiel Elliott (21) leaps forward on a carry for a first down between Washington Football Team's Cole Holcomb (55), Kamren Curl (31), Jonathan Allen (93) and Chase Young (99) in the second half of an NFL football game in Arlington, Texas, Thursday, Nov. 26, 2020. (AP Photo/Ron Jenkins)

Former Dallas Cowboys star Dez Bryant has provided depth and experience at wide receiver for the Baltimore Ravens following his return from a two-year hiatus.

His numbers have thus far been lackluster, a word that also sums up the way Dallas and Baltimore have played recently heading into a Tuesday night matchup between teams struggling to remain in the playoff picture.

The Cowboys (3-8) have dropped five of six, yet they've still got a shot at the postseason because the NFC East is awful. The Ravens (6-5) have lost three in a row, but hope to rebound behind quarterback Lamar Jackson, who was activated off the reserve/COVID-19 list Monday after missing last week's loss to Pittsburgh.

An outbreak of COVID-19 among the Ravens pushed the Pittsburgh game back six days and forced the NFL to move the Dallas-Baltimore game from last Thursday.

Bryant scored 73 touchdowns over eight strong seasons for Dallas before being released in April 2018. He hoped to catch on with New Orleans, but tore his Achilles tendon soon after signing and remained inactive before joining Baltimore's practice squad in late October.

Promoted to the 53-man roster soon after that, the 32-year-old Bryant has been a mentor in the locker room and contributed four catches for 28 yards in three games (all against Tennessee on Nov. 22).

Once there was a time when Bryant would make no secret of his displeasure of playing a major role. Now he's content just to be part of the offense.

“I’m grateful and I’m thankful just to be in the locker room and be able to talk football, especially with some of these young guys," Bryant said. “To just teach, I think that’s cool. I’ve been having fun with just doing that alone, and at the same time, getting myself prepared for any situation.”

There are no hard feelings between Bryant and his former team.

“Dez is an eternal light of positiveness for our game," Cowboys owner Jerry Jones said. “I couldn’t be happier to see him on the field. Now, I’m going to be a little worried because I do know how that rascal can get up there and get a ball.”

Bryant called his 2018 release by Jones “water under the bridge," adding, “I’m thankful that he drafted me and gave me the opportunity to play for his franchise. But I’m here now. I’m excited to be a Baltimore Raven. I’m looking forward to going up against those guys on Tuesday.”

Social distancing aside, there are sure to be plenty of fist-bumps and maybe even hugs before and after the game.

“One of my favorite teammates of all time. Even better player," Dallas running back Ezekiel Elliott said. “It's definitely great to see him getting his shot again. I wish him the best.”

The Cowboys went without a game for 12 days coming off their Thanksgiving loss to Washington because of Baltimore's virus issues. It could hardly be called a break, though.

Dallas strength and conditioning coach Markus Paul died at a hospital a day after collapsing in the team’s weight room. The Cowboys had to play Washington about 24 hours after Paul’s death, losing 41-16.

“I think it will be great for us to get out there and play and compete,” coach Mike McCarthy said. “Anytime you go through personal tragedy like this, it’s important to keep stepping forward as a team and as individuals.”

The Ravens have run for at least 100 yards in 34 straight games, the third-longest run in NFL history. Jackson leads the charge, and this week he will be backed by Mark Ingram and J.K. Dobbins, who weren't ready to face Pittsburgh after a stay on the COVID-19 list.

Dallas came into Week 13 ranked last in the NFL in rushing defense, allowing an average of 156.4 yards per game.

“Very prestigious number. Grateful to put that number on my back every Sunday and every day at practice," Lamb said. “For me to go against a guy I actually watched growing up excel in this jersey number is a huge honor on my end."

Defensive end DeMarcus Lawrence leads Dallas with 24 QB pressures and is second to Aldon Smith with 4½ sacks, but the only numbers he really cares about are the 3 and 8 the Cowboys are carrying in the standings.