Bucs, Browns, Bills out to follow footsteps of champ Chiefs 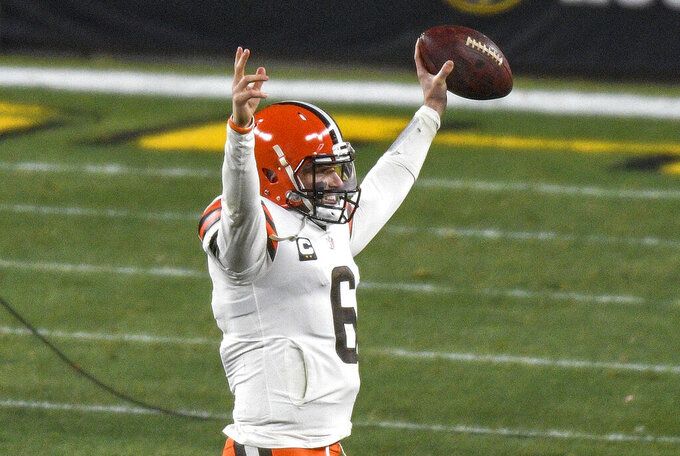 Cleveland Browns quarterback Baker Mayfield (6) celebrates as he walks off the field following a win over the Pittsburgh Steelers in an NFL wild-card playoff football game in Pittsburgh, Sunday, Jan. 10, 2021. (AP Photo/Don Wright)

Aside from winning the final Super Bowl before the merger in 1970, the Kansas City Chiefs’ biggest claim to fame for over half a century was team founder Lamar Hunt coining the phrase Super Bowl.

Patrick Mahomes changed all of that a year ago when he led a furious fourth-quarter rally that sent the Chiefs to a 31-20 win over San Francisco in Super Bowl 54.

Now, there are Mahomes murals all over town, the city's famous restaurants run specials in his honor and he even has a cereal named after him.

The Chiefs (14-2) are again a top seed and they're one win away from becoming the first team ever to host three consecutive AFC championships. The only NFC team to do that was the Philadelphia Eagles from 2002-04 when Andy Reid was their coach.

Even after an excruciatingly long wait, a franchise’s fortunes can change quickly.

Three long-downtrodden teams — the Browns, Bills and Buccaneers — have made it to the divisional round this weekend and are certain they have as good a chance as the Chiefs, Packers, Saints, Ravens or Rams of winning Super Bowl 55.

In Cleveland, a strange season has turned surreal.

The Browns are playing football in January — not searching for a coach or general manager or trying to figure out what to do with one of their high draft picks.

After a nearly two-decade crawl, the Browns (12-5) are among the NFL’s elite, one of eight teams remaining with a shot at winning it all. That’s heady stuff for a franchise that has never made it to the Super Bowl.

Yet, under first-year coach Kevin Stefanki’s steady hand, the Browns have steered around one obstacle after the next and have taken off on a run few imagined.

They won 11 games to make the playoffs for the first time since the 2002 season. Then, with Stefanski unable to make the trip after he tested positive for COVID-19 and missing two other key players and four assistant coaches, the Browns won their first playoff game in 26 years last Sunday by stunning the rival Pittsburgh Steelers at Heinz Field, where so many Cleveland seasons had died previously.

They did it with Stefanski in his basement back home, and they finished off their first playoff road win since 1969 with a left guard who introduced himself to quarterback Baker Mayfield in the locker room before kickoff.

Stefanski took part in the postgame celebration on FaceTime in a scene that seems oddly perfect in a pandemic season of Zoom calls, protocols and social distancing.

The Browns’ success has provided a needed lift for a football-crazed region that’s known mostly losing during an expansion era with few highlights.

“I have done a lot of driving around town the last few days just because I have to get out of here,” he said, speaking on a conference call from his basement. “Just to see all of the Browns flags and seeing everybody wearing the Browns hats, I definitely feel it. I think our players understand how big it is for this community, and we have to keep it going.”

Behind Josh Allen and Stefon Diggs, the Bills (15-3) erased plenty of franchise records established by Jim Kelly & Co. back when the Bills won a record four consecutive AFC titles in the 1990s.

“There has been so much stuff that we have said as former players, ’These guys got a damn good football team,” Hall of Fame running back Thurman Thomas said. “Their defense probably won’t hold you to 3 points or whatever, but their offense? Their offense is a problem.”

The Bills led the AFC with a 30.3-point scoring average during the season, and they haven’t lost since Nov. 15, when DeAndre Hopkins hauled in Kyle Murray’s 42-yard Hail Mary as time expired, giving Arizona a 32-30 win.

Allen’s 69.2 completion percentage represents an NFL-record jump of 16.4% since his rookie season in 2018.

“But you give him Stefon Diggs and you see what he’s made of and how he’s gone about his business,” Thomas said. “And he has been tremendous. I think Bills fans, including myself, didn’t think he was going to be this good this good this early. And he has proved a lot of people wrong.”

No, there’s no comparing this Bills team to those of his playing days, Thomas said.

Not yet anyway, Thomas said, but those comparisons are undoubtedly coming.

“Especially if they go on to win the Super Bowl this year, I mean, you’re going to have to talk about it,” Thomas said. “I really think it’s going to come down to the Bills and Kansas City. ... These guys believe they can win anywhere. They don’t care where they’re playing.”

The Buccaneers ended the NFC’s longest playoff drought with their first playoff berth since 2007 thanks to the arrival of six-time champion Tom Brady in the offseason.

The Buccaneers immediately went from a franchise that spent more than a decade trying to transform themselves into playoff contenders to a club with expectations of becoming the first team to appear in a Super Bowl in their home stadium.

Brady was attracted to a roster featuring a slew of offensive playmakers, including receivers Mike Evans, Chris Godwin and Scotty Miller, running back Ronald Jones and tight ends O.J. Howard and Cameron Brate.

The Bucs then lured Rob Gronkowski out of retirement, upgraded the offensive line by drafting tackle Tristan Wirfs, and signed veterans LeSean McCoy, Leonard Fournette and Antonio Brown to bolster the depth around their 43-year-old quarterback.

Coach Bruce Arians acknowledged before the start of the playoffs that the Bucs won’t consider it a successful season unless they win it all.

“Really, it’s not going to be if we don’t put rings on our fingers because once you’re in the tournament, that’s what you’re playing for,” Arians said. “We did enough to get here and it will not be satisfying unless we finish it.”

And maybe fortunes, too.