Budgeteers hashing out ed funding, use of coronavirus money 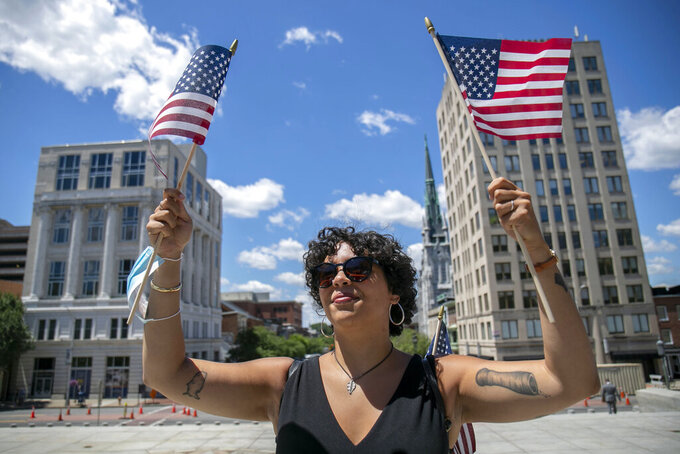 Savannah Thorpe, Lancaster, joins with multiple groups rallying on the steps of the Pennsylvania State Capitol in Harrisburg, Pa., to lobby lawmakers into spending more of the federal relief money on students, the poor and other communities of need, Wednesday, June 23, 2021. (Mark Pynes/The Patriot-News via AP)

HARRISBURG, Pa. (AP) — Pennsylvania’s plans for its share of coronavirus relief and a potential boost in education funding are among the issues being negotiated as lawmakers and the governor entered the final week of their budget year on Thursday.

Leaders said the 2021-22 budget could wrap up this weekend, but details were scanty as high-level negotiations continued inside the Capitol.

“I don’t think there’s anything tough left to do, it’s just all part of a process, there’s a lot of intricate parts,” Benninghoff said.

Wolf in February asked the Republican-controlled Legislature to boost state spending to $37.8 billion for the 2021-22 fiscal year starting July 1. Including a supplemental cash request of more than $1 billion to cover cost overruns in the current fiscal year, Wolf is seeking authorization for nearly $6 billion more in new spending, or almost 18% more than this year’s $33.1 billion approved budget.

The 2021-22 fiscal year budget also will rely on federal money that lowers the reliance on state tax dollars, it’s just a question of how much. Many Republicans want a big slice of it set aside for the coming years.

Wolf’s proposal carries what could approach $2 billion extra for public schools, an increase of more than 20%, although there are indications the Republican approach may be closer to $300 million.

The biggest part of Wolf’s request, $1.35 billion, would be distributed to schools to pay for their primary operations, such as teacher salaries, operating costs and supplies, on top of the $6.8 billion they currently receive.

The majority of that $8.1 billion total would go out through a 6-year-old school funding formula designed to iron out inequities in how Pennsylvania funds the poorest public schools. A portion of it — about $1.1 billion — would ensure that no school district receives less than it does now.

Pennsylvania barely uses that funding formula, and Wolf’s proposal comes as a trial nears in a lawsuit filed in 2014 by a handful of school districts that accuses the state of inadequately funding public education.

The final days of budget talks invariably are accompanied by deals on other issues. On Thursday, lawmakers were actively working on a deal to reauthorize mixed-drinks to go for restaurants.