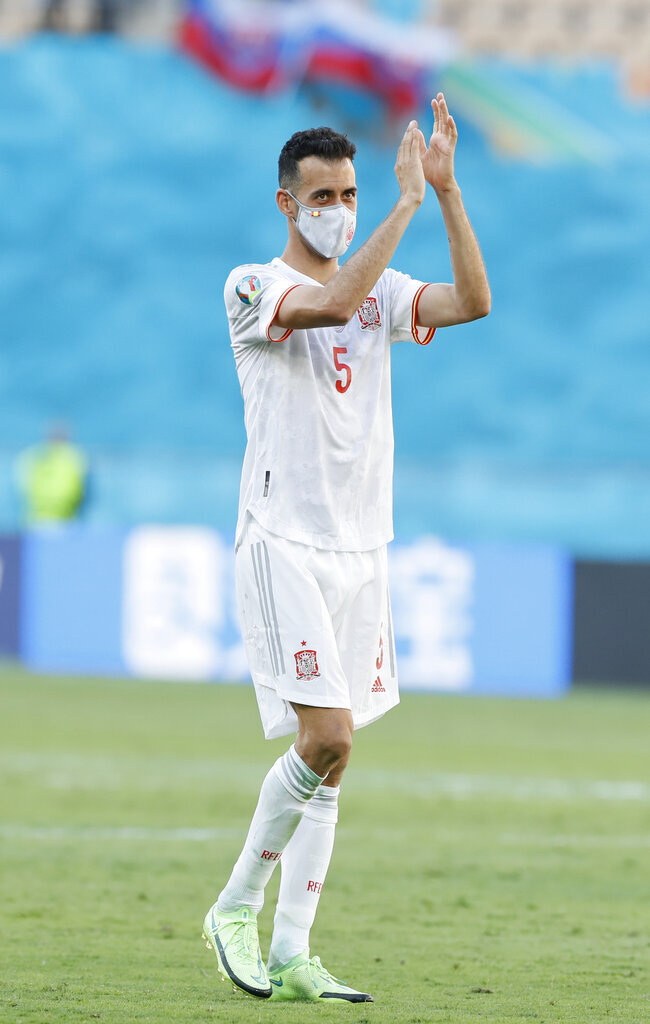 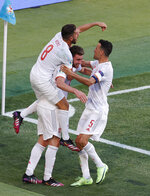 SEVILLE, Spain (AP) — After helping Spain avoid elimination at the European Championship, Sergio Busquets had to pause for a moment while talking about his time away from the squad because of the coronavirus.

The Spain captain teared up recalling the doubts that went through his mind after being told he had to go into isolation only days before the tournament was to begin.

“I’m emotional because I had to go through some difficult times,” Busquets said. “I had to stay at home for 10 days, not knowing if I was going to be back or not.”

Spain was glad Busquets did make it back, just in time to lead the team to victory over Slovakia on Wednesday. The Barcelona midfielder was voted the man of the match in the 5-0 win that sent Spain to the round of 16 after opening with disappointing draws against Sweden and Poland.

The result allowed Spain to finish second in Group E, setting up a meeting against Croatia in Copenhagen on Monday.

“All this helped us grow,” Busquets said. “Now whatever challenges we have in front of us, we will face them with this mentality.”

Busquets’ return was a big boost for a Spanish squad that lacked leadership and struggled with poor finishes and a shaky defense in the first two matches. The 32-year-old midfielder, the only member left from Spain’s World Cup-winning squad in 2010, gave the team that much-needed balance it had been missing so far at Euro 2020.

Busquets was the first Spaniard to touch the ball when the match started at La Cartuja Stadium, and he was in control of the midfield from then on. Collected and composed as usual, Busquets showed no signs of being affected by his less-than-ideal preparations because of the virus. He constantly guided his teammates and helped created chances in attack and keep the defense protected.

“It’s a pleasure to be able to play with Busquets because everything is easier,” Spain forward Ferran Torres said Thursday. “We all know about his history, about what he has given to this national team. We only have to enjoy his game and keep up with him.”

Busquets, who was asymptomatic with the virus and could practice at home while in isolation, had been replaced in the first two matches by Rodri Hernández, who couldn’t bring in the same attitude and leadership of the veteran Barcelona player.

Busquets took over as captain after Sergio Ramos was left off the squad after playing sparingly this season because of injuries. Jordi Alba had been the captain at Euro 2020 in Busquets' absence.

Busquets was loudly cheered by the home crowd when he was substituted by Thiago Alcantara in the 71st minute after feeling a little tightness in his calf, which he said shouldn’t be a problem ahead of the round of 16.

“He played perfectly,” said Spain coach Luis Enrique, who decided to wait for Busquets instead of dropping him from the squad despite not knowing if he would fully recover from the virus. “He is unique, a guarantee.”

With Busquets back and the team having found its scoring touch again, Luis Enrique feels Spain is back to being a contender at Euro 2020. He said there are always things to improve, but “La Roja” remains among the favorites for the title.

“We are gaining momentum. I’m sure that if you ask any of our rivals no one will be happy to have to play against us,” the coach said. “Now we get to play against a Croatia team that has great players and plays at a high level. You can’t expect weak teams in the round of 16."

Torres downplayed concerns about the national team’s streak of missed penalties after Álvaro Morata failed to convert from the spot on Wednesday for Spain’s fifth consecutive penalty miss. Gerard Moreno had failed with his attempt in the opener against Sweden.

“It’s not something we are too concerned about because we are working to improve and you’ll see that the next time we have penalties we are going to convert them,” Torres said.

The Manchester City forward apologized “if at any point” he “offended” someone for his recent comments about Robert Lewandowski. He said before the match against Poland that Spain defenders would “eat Lewandowski" during the game. Lewandowski scored a second-half equalizer.

Luis Enrique had said he doubted anyone would make those comments about Lewandowski, but Torres admitted he did.

“I would like to apologize because I respect Lewandowski and all other forwards,” Torres said. “He is someone I look up to.”