Cabo's world-class golf scene revving back up after pandemic 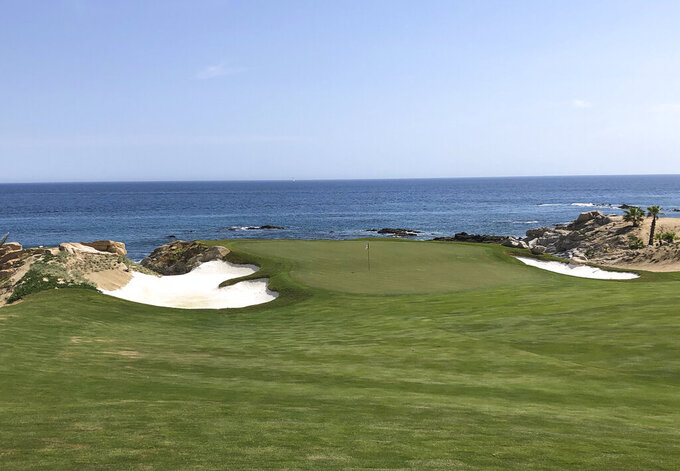 One of several holes appears at the Cabo Del Sol’s Ocean Course along the Sea of Cortez in Cabo San Lucas, Mexico on Feb. 22, 2020. Cabo Del Sol and the other 17 courses at the tip of Baja California are coming back to life as the coronavirus pandemic begins to lessen. (AP Photo/John Marshall)

Course architect Greg Norman, owner Francisco “Paco” Bulnes and dignitaries from across Baja California were on hand to celebrate the spectacular course along the Pacific Ocean. Gourmet food stations lined the courtyard as various local musicians played on various stages for a few hundred guests.

Capping the night was a full concert by Journey, complete with a Fourth of July-worthy fireworks show during the encore.

Three weeks later, Rancho San Lucas, along with the rest of the world, shut down due to the coronavirus pandemic.

“It was a tough first year for sure,” Rancho San Lucas director of golf Brad Wheatley said.

Now, with the pandemic finally letting up, Cabo is on its way back toward normality, and so is one of the world's premier golf getaways.

The tip of Baja California, consisting of Cabo San Lucas and San Jose del Cabo, started with two courses in the early 1990s and has blossomed into a bucket list destination.

The peninsula is dotted with 18 courses, each as spectacular as the next, with several more in the works.

Some of the world's most acclaimed architects have designed courses in Cabo, including Robert Trent Jones, Tom Fazio, Jack Nicklaus and Tom Weiskopf. Tiger Woods and Fred Couples also have designs in Cabo.

The courses are meticulously maintained with views of the Pacific Ocean or Sea of Cortez on nearly every hole, and the weather is almost always balmy.

Many of the green fees aren't cheap — some are in the $350-400 range — but the courses and the experience are worth the cost.

“Los Cabos is one of the big-boy golf towns in the world,” said Wheatley, who's been involved in Cabo golf for 30 years. “There's as much high-quality, championship-quality golf as anywhere in the world.”

The Greg Norman Course at Rancho San Lucas is part of a spectacular 834-acre tract that includes the luxury Grand Solmar Resort & Spa with a residential community of hacienda-style homes and high-rise residences overlooking the ocean.

Set above the beach along the Pacific, the course has three distinct ecosystems: six holes through the dunes, six through the desert, six in a semi-mountainous area.

“I don't know many places in the world where you can stop playing golf to watch whales jump 500 feet offshore,” Norman said.

Cabo Del Sol is set in an 1,800-acre community along the Los Cabos Corridor that includes two golf courses, a beach club, four hotels — another is on the way — home sites and villas.

The Desert Course, designed by Weiskopf, winds through canyon-like arroyos and desert landscapes, with mountain and ocean views. The Cove Club, designed by Nicklaus, stretches for mile along the Sea of Cortez with ocean-front holes golfers won't soon forget.

The Desert Course underwent a makeover during the pandemic and the Cove Club, formerly the Ocean Course, recently went private for residents and hotel guests.

“The Desert Course is obviously a Weiskopf course with great views throughout and the conditions have improved immensely from March,” said Erin Dixon, vice president of sales at Cabo Del Sol. “On both courses, I think golfers are going to see more color than in year's past in terms of planting and clean-up efforts around the holes.”

Cabo is known as a spring break spot, but the on-course atmosphere is more chill.

Serious players can get through their rounds at a good pace, but there's also the opportunity to stop to watch the whales during the winter or linger at one of many “comfort stations” as multiple groups play through.

And those stations, wow.

They're not like the hot-dog-and-soda stopovers in the U.S. We're talking tamales, tacos, fresh grilled fish, fresh-packed snacks and nearly full bars. “It’s definitely not what you’ll see in the States,” said Peter Carlton, president of Oakmont Corporation and leader of Cabo Del Sol.

Golf in Cabo was mostly locals last summer during the pandemic before tourists starting arriving again during the holidays. It's steadily picked up — spring break was busy — and is inching back to pre-pandemic levels.

Back to being a premier golf destination.