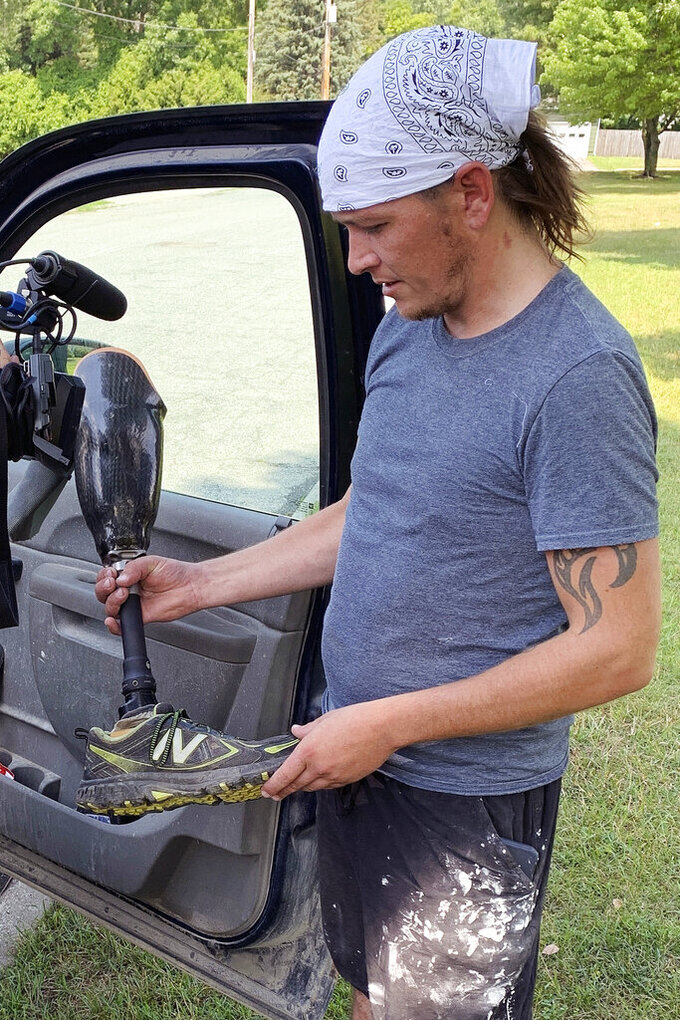 FILE - In this Monday, July 27, 2020, file photo, farmer Joe Marszalkowski holds a prosthetic leg that he found the day before in a soybean field on his farm in West Addison, Vt. The leg was lost by double amputee Chris Marckres while skydiving on Saturday. (Jack Thurston/NECN and NBC10 Boston via AP, File)

It's difficult to imagine a year when we needed a little comic relief more desperately than in 2020. No yuks? Yuck.

Fortunately, New Englanders came through with some welcome pandemic distractions.

Rhode Island's signature squid took center stage at the Democratic National Convention. A Connecticut city named a sewage treatment plant in comedian John Oliver's (dis)honor. And a soybean farmer in Vermont harvested a prosthetic leg that a skydiver had lost during a jump.

A guide to some of the region’s stranger stories from the past 12 months:

Rhode Island was a big sensation at the virtual Democratic National Convention for its unconventional video plugging calamari — the state’s official appetizer. In a nationally broadcast made-for-memes moment, a lawmaker and a restaurateur with a heaping plate of sauteed squid stood on a beach and proclaimed Rhode Island the “calamari comeback state.” State Democratic Party chair Joseph McNamara said he wanted to highlight how the coronavirus pandemic has decimated the seafood industry. Rhode Island’s 30-second spot, part of the DNC’s roll call where states formally nominated Joe Biden for president, was an instant social media sensation.

The story of Buddy the Elf meeting his biological father came to life just in time for the holidays. Doug Henning of Eliot, Maine, wore a costume to look like Will Ferrell in the movie “Elf” while meeting his father face to face for the first time last week at Boston's Logan International Airport. He even broke into the same awkward song from the movie. Henning said his biological father “probably thought I was a lunatic.” The dad didn’t get the joke because he hadn’t seen the movie, but that didn’t stop him from giving his son a big hug. Other family members laughed and cheered.

Comedian John Oliver made a secret trip to Connecticut to help cut the ribbon on a new sign naming the city’s sewage treatment plant in his honor. Danbury’s City Council voted to rename the sewage plant “The John Oliver Memorial Sewer Plant,” following a tongue-in-cheek battle that began with an expletive-filled rant against the city on HBO’s “Last Week Tonight with John Oliver” in August. Mayor Mark Boughton responded to the attack by posting a video of himself at the sewage plant, saying the city was going to name it after Oliver “because it’s full of crap just like you, John.”

A New Hampshire voter who was told she couldn’t wear an anti-Trump shirt at a polling place because it violated electioneering rules simply whipped it off and did her civic duty topless. The woman wore a “McCain Hero, Trump Zero” T-shirt to the polls in Exeter for September's primary election. Moderator Paul Scafidi told her she couldn’t wear a shirt featuring a political candidate. He said the woman took her shirt off before he could react, and because he didn’t want to inflame the situation, he just let her vote.

A Vermont skydiver who lost his prosthetic leg during a jump got it back, thanks to a farmer who spotted it in a soybean field. Double amputee Chris Marckres went for a jump at Vermont Skydiving Adventures in West Addison and lost one of his prosthetic legs after leaping from the plane while harnessed to an instructor. Marckres said he was experiencing an adrenaline rush and didn’t realize he’d lost the expensive limb. When he spread the word on social media about the missing prosthetic, farmer Joe Marszalkowski saw the post, kept an eye out and found it. Except for scratches, the leg was undamaged.

A lost dog’s journey across the Canadian border and back was complicated by coronavirus restrictions limiting movement from a town on one side of the St. John River to a Maine town on the other. The German shepherd named Diamond escaped from her home in New Brunswick and crossed into Fort Kent, Maine. Coronavirus restrictions prevented her caretakers from following. Diamond's owner, Paryse Michaud, posted a plea for help on Facebook. After six hours, friends on the Maine side found Diamond and coordinated with friends to hand her off through a border station.