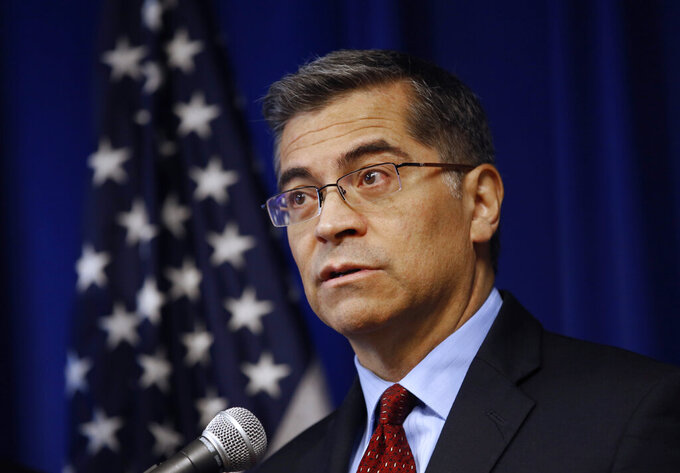 FILE - In this Dec. 4, 2019, file photo, California Attorney General Xavier Becerra speaks during a news conference in Sacramento, Calif. Becerra on Monday, Dec. 14, 2020, asked a judge to order Amazon to comply with subpoenas his office issued nearly four months ago as part of an investigation into how the company is protecting workers from the coronavirus at its facilities. (AP Photo/Rich Pedroncelli, File)

California Attorney General Xavier Becerra on Monday asked a judge to order Amazon to comply with subpoenas his office issued nearly four months ago as part of an investigation into how the company protects workers from the coronavirus.

Becerra said the online sales giant hasn't provided enough information on its safety steps and the status of infections and deaths at its shipping facilities across California. The attorney general is President-elect Joe Biden's pick to lead the Health and Human Services Department; he'd be the first Latino in the post.

“We’re investigating because we got reports, information, complaints about conditions, incidents,” Becerra said. “We believe that it merits looking into Amazon’s protocols, practices, based on information that we have received."

The court filing from Becerra lists media reports about three Amazon workers’ deaths but said the company mentioned none of them in its responses. It says he learned more about the company's infection rate from its blog posts than from its subpoena responses.

The company did not respond to a request for comment left through an email provided for reporters. Amazon said in a statement to The Sacramento Bee that it is "a leader in providing COVID-19 safety measures for our employees — we’ve invested billions of dollars in equipment and technology, including building on-site testing for employees and providing personal protective equipment. We encourage anyone to compare our speed and actions in this area to any other major employer.”

Becerra wants a Sacramento County Superior Court judge to find that the company hasn't given specific details on its coronavirus prevention efforts in response to subpoenas issued Aug. 19, including its sick leave policies and cleaning procedures. He also wants access to the company's raw data on the number of infections and deaths at its facilities in California.

“We urgently need to know about complaints made by Amazon associates to the company about working conditions, potential retaliation taken against employees who raise these workplace safety concerns,” he said. “We don’t have time to drag our feet ... our state finds itself in the thick of this pandemic.”

His office wants to know which facilities have the highest infection rates, how the company defines which employees have been diagnosed with the virus, any contacts it has had with health officials, and documents related to any lawsuits or investigations by individuals or other agencies.

Becerra routinely declines to comment on ongoing investigations but called a virtual news conference to criticize Amazon for making billions of dollars during the pandemic as consumers increasingly turn to online purchases over brick-and-mortar stores — profits that he said are built on the labor of employees who put themselves at risk.

The company projects sales will top $100 billion in the final quarter of 2020, and in the third quarter, “its revenues soared while its profits tripled compared to 2019," Becerra said.

“While Amazon continues to operate profitably, it has been less than forthcoming about its operations and its practices to protect its workers,” he said.

The attorney general said the subpoenas followed months of informal communications with the company over its health and safety policies.

The company has missed several chances to comply, Becerra said, but he has made no decision on whether its practices are adequate — in part because he has not received enough information from the company.

The probe began last spring, his office said in seeking the court order, and officials first sent Amazon a letter in May seeking information.

Cal-OSHA, more formally known as the Division of Occupational Safety and Health, and the San Francisco Department of Public Health also have launched investigations. Officials in other states also are investigating Amazon workers' complaints.