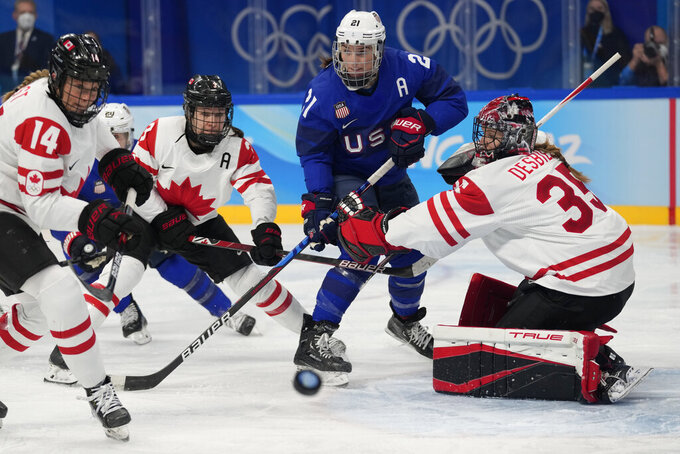 Canada goalkeeper Ann-Renee Desbiens (35) blocks a shot against as United States' Hilary Knight (21) watches for the rebound during a preliminary round women's hockey game at the 2022 Winter Olympics, Tuesday, Feb. 8, 2022, in Beijing. (AP Photo/Petr David Josek) 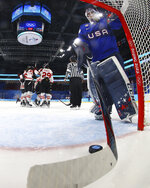 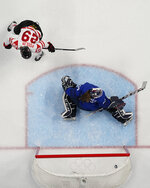 BEIJING (AP) — It was going to take more than a one-goal deficit to rattle Brianne Jenner and the Canadians in their long-running cross-border rivalry against the Americans, which resumed Tuesday at the Beijing Olympics.

Rather than wilt, Canada responded by scoring three times over a span of 5 minutes, 25 seconds to secure a 4-2 win over the defending champion United States, claiming the women’s hockey tournament’s top seed entering the playoff round.

“Hockey’s a game of momentum shifts, so to come out and have a strong shift regardless of if we score or not after they do, it’s huge,” Jenner said. “They’re a good hockey team, they’re going make plays, but I think we answered really well tonight.”

“I thought it was the difference in the game,” Johnson said of Canada’s second-period surge. “I thought we carried all the momentum, and all of a sudden we just kind of forgot our situation a bit.”

There’s no reason for disappointment to set in for the Americans, or for the Canadians to spend too much time celebrating. Barring a major upset, the two global hockey powers are expected to meet again in the gold-medal final next week.

Canada (4-0) and the U.S. (3-1) are the tournament’s top seeds and combined to outscore each of their first three opponents by a margin of 47-5. Canada faces Sweden (2-2) in the quarterfinals after the Swedes advanced with a 3-1 win over Denmark. Also on Tuesday, Japan beat the Czech Republic 3-2 in a shootout, and Finland beat the Russians 5-0.

In a fierce rivalry dating to before the women’s first Olympic tournament at the 1998 Nagano Games — won by the Americans — the U.S. and Canada put on an entertaining show Tuesday in Beijing in a fast-paced outing in which the teams traded leads.

Jenner, who scored twice, sparked the run by one-timing in Sarah Nurse’s backhand pass into the slot to tie the game at 2 with eight minutes left and 26 seconds after Alex Carpenter scored for the U.S.

Jamie Lee Rattray scored for Canada 2:25 later by converting Natalie Spooner’s pass into the slot. Marie-Philip Poulin — nicknamed Canada’s Captain Clutch after scoring gold-medal clinching goals in 2010 and '14 — capped the run by scoring on a penalty shot while in the midst of killing a penalty.

“She comes up clutch for us day in and day out,” goalie Ann-Renee Desbiens said. “When it matters, that’s when she’s at our best.”

The Canadians overcame an exceptionally slow start in an outing where they were outshot 53-27.

Much of the credit goes to Desbiens, who stopped 51 shots, including breakaway chances by Grace Zumwinkle and Abbey Murphy to keep the game scoreless in the opening 10 minutes.

“Yeah, busy day, but that’s a fun type of day,” said Desbiens, who made her third start of the tournament. “I think it just shows how resilient we are, how we can’t just change our focus and then don’t let momentum swing for too long.”

Dani Cameranesi also scored for the Americans and Maddie Rooney stopped 23 shots in her second start of the tournament. The most experienced of America’s goaltending trio, she backstopped the U.S. in the gold medal-winning game four years ago.

The concerns are on offense for a U.S. team that converted just one of six power-play opportunities and continues having difficulty finishing. On Saturday, the Americans outshot the Russian team 62-12 in a 5-0 win.

“I just think you got to keep going. That happens sometimes,” forward Amanda Kessel said. “Over the course of seven games, not every chance is going to go in, or you’ll hit a little rut. So I think if we keep doing what we’re doing the floodgates are going to open.”

The struggles were apparent in the opening period, when the Americans had a 14-2 edge in shots before Canada opened the scoring on Jenner’s power-play goal 14:10 in. Poulin began the play at the top of the left circle by feeding the puck down low to Sarah Fillier, who immediately centered it to Jenner for a tap-in.

Canada played its third game minus second-line forward Melodie Daoust, who is day to day after being hurt in a 12-1 win over Switzerland. The U.S. is expected to add Britta Curl to its lineup later this week to replace Brianna Decker, who broke her left ankle in a 5-2 win over Finland.

Referee Cianna Lieffers left the game 1:35 into the second period after being struck in the face by Kessel’s stick. Lieffers returned later in the period; Kessel said she apologized following the play.