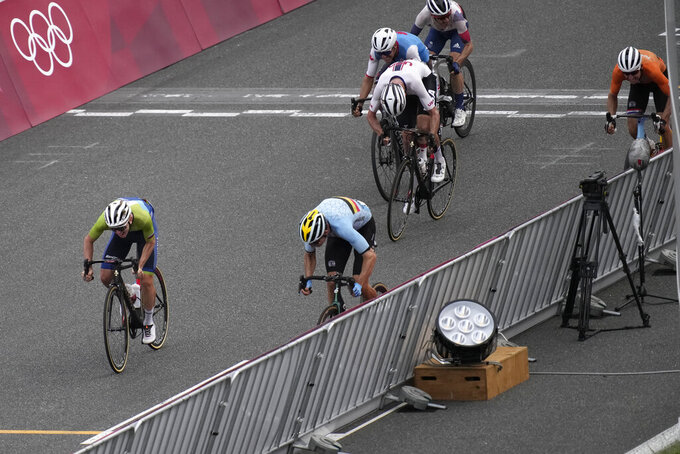 Tadej Pogacar of Slovenia, left, and Wout van Aert of Belgium, battle for a photo finish for silver and bronze medals during the men's cycling road race at the 2020 Summer Olympics, Saturday, July 24, 2021, in Oyama, Japan. (AP Photo/Christophe Ena)

OYAMA, Japan (AP) — Richard Carapaz climbed onto the medal stand and locked arms with Wout van Aert on his right and Tadej Pogacar to his left, the diminutive Ecuadoran rider dwarfed by two of the giants of modern cycling.

Funny thing? On this day, Carapaz had stood taller than everyone.

Playing his tactics perfectly on one of the toughest race courses in Olympic history, Carapaz rode away from some of the biggest names in his sport on Saturday to win one of the first gold medals of the Tokyo Games. In fact, “The Locomotive” was so far ahead at the finish line that he could enjoy the roar from one of the few crowds allowed in a venue.

“The truth is this is the best moment,” Carapaz said with a smile. “It is an incredible moment that words can’t describe.”

Dangling around his neck was just the third Olympic medal ever won by his small South American country. The other two belong to Jefferson Perez, who won race walking gold at the 1996 Atlanta Games and silver at the 2008 Beijing Games.

The chasing group rounded the corner in sight of Carapaz at the finish line, then played a game of cat-and-mouse for the other two medals. Van Aert, who did everything he could to pull back Carapaz on the run-in to the finish, was rewarded for the effort by edging Tour de France champion Pogacar in a photo finish.

“We knew beforehand it was going to be difficult,” van Aert said. "Carapaz stayed ahead very well. We knew he would be very, very strong, and he deserved the win.”

Dutch rider Bauke Mollema was fourth and Canadian Michael Woods fifth after launching a failed attack of his own.

Carapaz's breakaway buddy on the final climb of a torturous day, Brandon McNulty, finished sixth for one of the best finishes by an American since Alexi Grewal won the 1984 gold medal in Los Angeles.

“I think McNulty was a great companion in the breakaway, period, because he’s very, very good on even terrain,” Carapaz said. “We were able to maintain that advantage that we had, 20 or 30 seconds that separated us from the rest. And then of course, coming here down to the circuit, I simply continued on that level and that's how I won.”

Carapaz, who finished third at the Tour six days ago, had been given merely an outsider’s chance with just one teammate joining him on the starting line. But he perfectly played off some of the more powerful teams, biding his time safely in the peloton before unleashing the decisive move at the most opportune time.

“To my country, the truth is you have to believe, no?” Carapaz said. "I have worked so hard to get here. I’m here, I’m enjoying — it’s something so big for me. And simply thank you for the support which truthfully really helped me get here.”

The ban on spectators for this Summer Olympics did not extend past Tokyo, and that meant thousands of them — wearing sun hats and waving fans — turned up at the speedway for the finish. There was still a cap of 50% of capacity, but that left room for about 11,000 fans overlooking one of the longest straightaways in motorsports.

How eager were they to get a rare glimpse of these Olympics, especially after a year’s delay? Many showed up seven hours before riders were expected to reach them, spending almost the entire time baking in the sweltering sun.

Once the race began it was defending Olympic champion Greg van Avermaet, who triumphed in stunning fashion along Copacabana Beach five years ago, going to the front for Belgium. He set a punishing pace through the foothills of Mt. Fuji, sacrificing his own ambitions to position van Aert and fellow teammate Remco Evenepoel for a run at gold.

Slovenia also pushed the tempo as it tried to set up Pogacar and Primoz Roglic, two of the prerace favorites.

Another rider with medal aspirations, Britain’s Geraint Thomas, crashed hard near the base of the first climb. His shoulder bloodied with road rash, the 2018 Tour de France winner eventually dropped out with 60 kilometers to go.

The peloton began to thin as it climbed the lower slopes of Mt. Fuji, the searing heat and humidity coupled with the brutal pace ejecting riders right off the back. But the real fireworks began as it headed up the steep slopes of Mikuni Pass, where gradients up to 17% left dozens more riders with anguished faces awash in sweat and grime.

Pogacar finally launched an attack, and initially only two riders could go with him: Woods, a former runner and one of the breakout stars of the Tour, and the 23-year-old McNulty, who had been overlooked by just about everyone.

“I tried my best when I attacked,” Pogacar said, “and soon I was regretting it.”

The trio was caught before the summit, though, and a dozen contenders were left to mix it up for the medals.

Carapaz wound up riding all the way to the top step of the podium.

"This has been an almost crazy day today, and I just waited for the good moment, the right moment," he said. “My country, they're over the moon right now. It's a very special moment for us.”