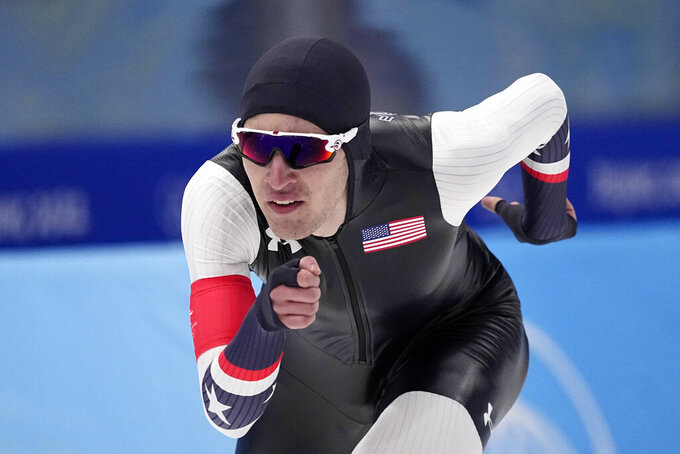 BEIJING (AP) — Casey Dawson's around-the-world dash to the Beijing Olympics got him to the starting line in time for the 1,500 meters.

Delayed for days in the United States by COVID-19, the speedskater's journey of 20-plus hours began in his hometown of Park City, Utah. He flew across the U.S. and caught a flight to Paris. From there, it was on to Beijing.

Dawson touched down in the Chinese capital shortly before 7 a.m. Tuesday. He cleared customs and COVID-19 testing at the airport and went straight to the athletes village. He got on a bus to the Ice Ribbon oval and about 12 hours after arriving, it was time to race.

His bags got misplaced along the way, leaving Dawson to pull a spare racing suit from his carry-on and borrow a pair of skates from Haralds Silovs of Latvia.

“The setup is slightly different, but just getting over the mental barrier was quite the thing and being comfortable on them is just hard for me to get used to in two ice sessions here,” Dawson said.

The 21-year-old skater's ordeal began when he tested positive for COVID-19 after qualifying at the U.S. trials in Milwaukee last month. He first tested negative on Feb. 1, just days before the Olympics began.

“I literally took 45 PCR tests over the past couple weeks just to test negative and finally get here,” he said.

“Once I got a negative test, I was riding the high,” he said. “But when I got a positive test I’d be on the ground just crying and didn’t think I’d get here.”

Because he'd had COVID-19, he was required to have four consecutive negative tests in order to be cleared. The first testing lab he used got removed from China's approved list, which caused all of his results to be voided. Starting the process again set him back a few days.

Throughout his testing nightmare, Dawson kept in touch with his teammates in Beijing. He provided regular updates on social media.

“The support has just been, like, crazy and I can’t appreciate it enough,” he said.

Dawson missed competing in the 5,000, but still has the team pursuit in which the Americans are a medal favorite.

“He looked very happy to be here,” teammate Emery Lehman said. “We were happy to have him.”

Dawson alternated between thinking his Olympic debut wouldn't happen and stubbornly clinging to his belief in what he called “the Olympic dream.”