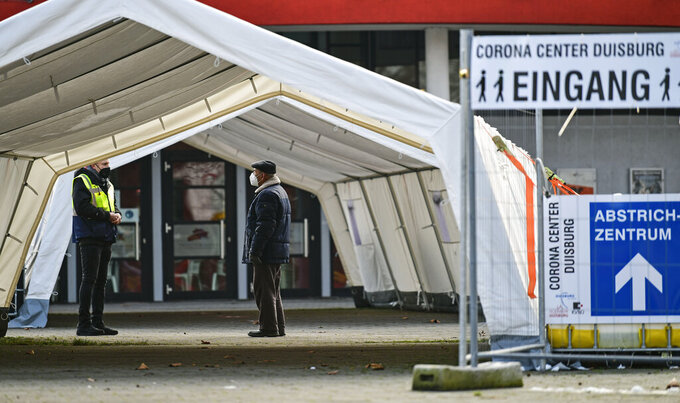 FILE - In this Monday, Jan. 25, 2021 file photo, a man wearing a face mask asks for information at the Corona Center in Duisburg, Germany. The former Musical theater has been turned into a COVID-19 test and vaccination center. Thousands of elderly Germans faced online error messages and jammed up hotlines Monday as technical problems marred the start of the coronavirus vaccine campaign for over-80s in the country's most populous state. (AP Photo/Martin Meissner, File)

BERLIN (AP) — Thousands of elderly Germans faced online error messages and jammed up hotlines Monday as technical problems marred the start of the coronavirus vaccine campaign for over-80s in the country's most populous state.

North Rhine-Westphalia, whose population of almost 18 million is bigger than that of many European nations, began administering shots to nursing home residents and staff last month, together with the rest of the country.

But people over 80 who still live at home were told they would have to wait until Feb. 8 to get their first shots in the state, even as vast vaccine centers set up before Christmas languished empty.

“Due to heightened demand, it's currently not possible to book a vaccination appointment,” many users were told as they tried to log into the website of the regional doctors' association, which is organizing the system. “Please try again later.”

Attempts to book appointments by phone were similarly futile, as many of the 1.2 million people over age 80 or their children flooded the hotlines.

The technical problems were an embarrassment for state governor Armin Laschet, who was recently elected the new head of Chancellor Angela Merkel's center-right Christian Democratic Union party, making him a possible contender to succeed her as chancellor this fall.

Laschet insisted that the start of vaccinations had been a success.

"Tens of thousands got appointments today, but one thing was clear: if a million people receive a letter and then call a hotline, there may be congestion and there may be technical problems,” he said, suggesting that people keep trying in the coming days.

North Rhine-Westphalia, an industrial powerhouse that is home to cities such as Cologne, Duesseldorf and Dortmund, currently lags far down the per capita vaccine league tables in Germany, with about 1.6% of the state's population having received their first shot.

Nationwide, fewer than 1.6 million people or about 1.9 % of Germany's population had received their first shot by Sunday — a rate far lower than in Israel, Britain or the United States — and 228,763 had received their second dose.

Germany has recorded more than 2.1 million confirmed COVID-19 cases and over 52,000 deaths since the start of the pandemic.

The country has so far received about 3.5 million doses, raising questions about why only half have so far been used.

Germany’s federal government sought to distance itself from problems with the vaccine rollout.

“The call centers for appointments are run by the states, not the federal government,” Health Ministry spokesman Hanno Kautz told reporters in Berlin.

An organization that campaigns for patients rights in Germany said people's failure to secure appointments would stoke frustration in a country where a sizeable minority are already leery of the shots.

Hospital staff in North Rhine-Westphalia, which borders Belgium and the Netherlands, had already complained that despite battling on the front lines of the pandemic, they weren’t offered the unused doses when people at nursing homes refuse the vaccine.

Instead, some of the leftover shots have been going to people who aren’t entitled to them, including local officials and journalists, leading to accusations of queue jumping and corruption.

Brysch said diverting from the priority lists should become a punishable offence, as it is in other countries.

Geir Moulson contributed to this report.