Charles Barkley gives money to employees at his high school 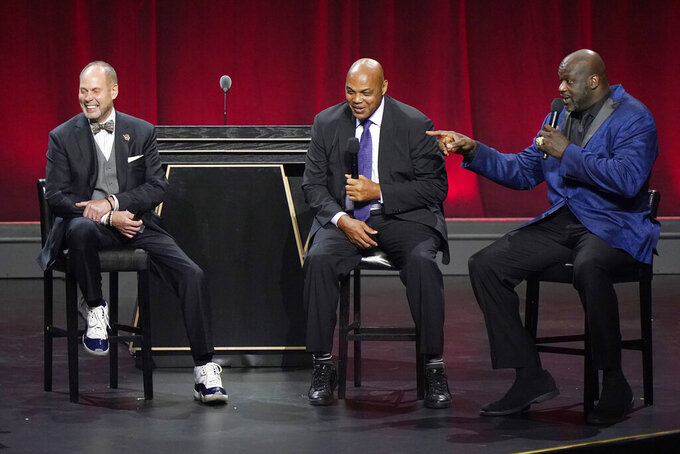 Broadcasters Ernest Johnson Jr., Charles Barkley, and Shaquille O'Neal, from left, of "Inside the NBA," smile as they are honored at the 2020 Basketball Hall of Fame awards tip-off celebration and awards gala, Friday, May 14, 2021, in Uncasville, Conn. (AP Photo/Kathy Willens)

LEEDS, Ala. (AP) — Charles Barkley has given $1,000 apiece to the more than 200 employees of a city school system in his native Alabama.

The former Auburn and NBA basketball star graduated from Leeds High School in 1981. The monetary gifts are going to each Leeds City School system employee.

The announcement was made Tuesday on Facebook. The Leeds City Schools page says it’s the latest show of support from Barkley. According to the post, Barkley has provided more than $3 million in scholarships to Leeds graduates over the past 30 years.

“We are humbled and wish to express our sincere gratitude to Charles Barkley for providing a $1,000 gift to each and every Leeds City Schools employee for going the extra mile this school year,” the Facebook post said. “Being a school employee is tough, but driving a bus, teaching, coaching, or working in the cafeteria, all while maintaining safety protocols, has been a daunting task during a worldwide pandemic.”

AL.com reports that there are about 226 Leeds school system employees.

The school system says Barkley also is a supporter of girls and boys basketball programs in Leeds, and that he has helped the system get laptops and hotspots for virtual learners during the pandemic.