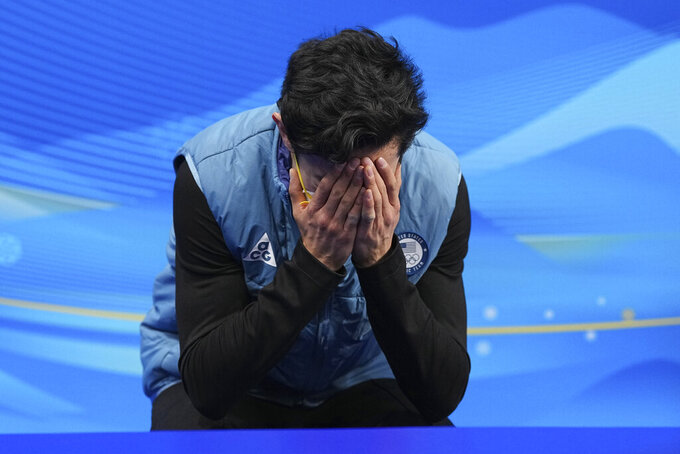 BEIJING (AP) — Nathan Chen flipped, whirled and even punched his way to a world-record score in the men’s figure skating short program at the Beijing Olympics.

Next up for the Salt Lake City native: an expected and long-awaited coronation as Olympic champion.

Chen made history in a historic venue on Tuesday, crushing the world record with a score of 113.97 at Capital Indoor Stadium, site of the 1971 ping pong diplomacy matches between the United States and China.

Chen shined on a day when the U.S. women’s hockey team lost 4-2 to rival Canada in the preliminary round and San Francisco native Eileen Gu brushed aside a torrent of hate on social media and won the gold medal in freeski big air while representing China.

Dressed in his typical, suave black-and-white suit, Chen performed perhaps his favorite program to La Boheme, the 1960s standard by the French-Armenian singer Charles Aznavour. When it was over, he had confidently made up for his poor short program four years at the Pyeongchang Games.

Opening with a perfect quad flip, the 22-year-old Chen breezed through his often-vexing triple axel and then drilled his quad flip-triple toe loop combination. He skated to a stop and, in a rare show of emotion, punched the air with his right fist.

“I was just elated,” Chen said. “At the last Olympics, both of the short programs didn’t go the way I wanted. To finally get an opportunity to skate the programs I wanted feels really good.”

American-born Eileen Gu struck back at her many critics by winning the gold medal in the debut of freeski big air and then defiantly answering questions about why she spurned Team USA to represent China at the Beijing Games.

The 18-year-old Gu is an American citizen whose mother is Chinese. Gu estimates she has spent at least a quarter of her life in China. She sided with China in 2019, saying she wants to encourage girls and women to take up winter sports.

“If people don’t believe me, if people don’t like me, then that’s their loss,” Gu said. “They’re never going to win the Olympics.”

China does not allow dual citizenship. It’s unclear whether Gu, who plans to attend Stanford, gave up her U.S. passport.

What is clear is that Gu stuck the best performance of her life at Big Air Shougang, where the ski hill is set among the imposing cooling towers and smokestacks of a closed steel mill. She landed a double cork 1620 for the first time in her career in her final turn to stun Tess Ledeux of France. It’s a move in which skiers spin 4 1/2 times while rotating twice off-axis while 20-some feet in the air.

“I want all the girls to break their boundaries,” she said in Chinese, via an interpreter. “I want them to think if Eileen can do it, I can do it.”

While saying through an interpreter that Gu is an “amazing athlete” who is “extremely competitive,” Ledeux groused that her rival “got lucky” because she had been practicing at Big Air Shougang for weeks, a benefit of competing for the host country.

Gu was having none of that, either.

“I’m not trying to keep everyone happy,” Gu responded. “I’m an 18-year-old girl out here living my best life. Like, I’m having a great time.”

Tennis player Peng Shuai, who has rarely appeared publicly since accusing a Chinese official of sexual assault, was in the stands.

Matthias Mayer of Austria overcame one of his poles getting stuck in the start house to win the men’s super-G and become the first man to win gold medals in Alpine skiing at three straight Olympics. Back home he’ll be known as a “Dreifach-Olympiasieger,” or three-time Olympic champion. He also won the super-G at the 2018 Pyeongchang Games and the downhill the 2014 Sochi Olympics.

Mayer won the bronze in downhill on Monday. His father, Helmut, won the silver in the first Olympic super-G at the 1988 Calgary Games.

Ryan Cochran-Siegle of the United States won the super-G silver almost 50 years to the day after his mother, Barbara Ann, won gold in the slalom at the 1972 Sapporo Games.

Johannes Hoesflot Klaebo defended his Olympic sprint title for Norway, which is tied for second in golds with three.

Maja Dahlqvist of Sweden took silver and Jessie Diggins of the United States earned bronze in the women’s race.

A FIRST FOR ITALY

Amos Mosaner and Stefania Constantini of Italy beat Sweden 8-1 in mixed doubles, giving Italy its first Olympic curling medal. They completed an undefeated run and set themselves up to defend their title on home ice in four years in Milan-Cortina.

Barring a major upset, women’s hockey powerhouses Canada and the United States are expected to meet for the women’s hockey gold medal final next week.

So when the defending Olympic champions from the United States were beaten 4-2 by their biggest rival, it was largely academic, although it did give Canada the top seed entering the playoff round.

Canada rallied from a one-goal deficit by scoring three goals in a span of 5 minutes, 25 seconds in the second period. Brianne Jenner scored twice for the Canadians.

U.S. coach Joel Johnson said the Americans need to be able to withstand momentum shifts, a lesson it needs to learn before the expected gold medal showdown.

“I thought we carried all the momentum, and all of a sudden we just kind of forgot our situation a bit,” Johnson said about Canada’s second-period surge.

Canada (4-0) and the United States (3-1) have been fierce rivals since before women’s hockey made its Olympic debut at the 1998 Nagano Games, when the Americans beat the Canadians in the gold medal game. Canada won gold in the next four Olympics before losing a 3-2 shootout to the Americans in 2018.