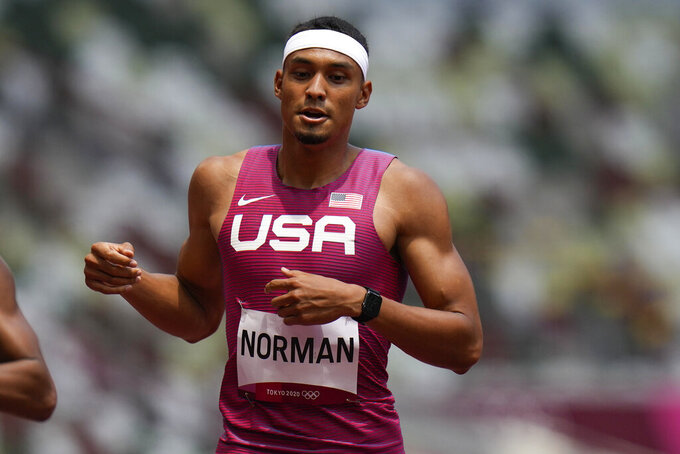 The women’s beach volleyball final will be live during NBC's primetime coverage, while the U.S. women's soccer team tries to salvage its Olympic tournament in the bronze medal match. The U.S. men's basketball team is one game away from its 16th Olympic men’s basketball gold medal with a semifinal matchup against Australia.

American track stars Michael Cherry and Michael Norman will be chasing medals in the men's 400-meter final to be aired live Thursday in NBC's primetime coverage.

Cherry is a two-time world championship medalist and Norman is among the top three in the world.

But the stacked field includes Steven Gardiner of the Bahamas, a country that has never won men's gold in an individual Olympic track event. The reigning world champion is the favorite.

Although reigning Olympic champion Wayde van Niekerk is out, there’s another former winner in the field — Kirani James of Grenada, who won at the 2012 London Games.

The sleeper is Anthony Jose Zambrano, who could become the first Colombian man to win a track and field medal at the Olympics.

And, there’s a little history to consider: The Americans have never gone three straight Olympics without winning gold in the 400. Team USA failed to win in 2012 and ’16.

The U.S. looks to move one win away from its 16th Olympic men’s basketball gold medal when it takes on Australia. The American men have never lost to the Australians in a major competition, going 15-0 in such meetings.

Australia has already defeated the U.S. men’s basketball team once this summer, in an exhibition at Las Vegas before the Tokyo Games. The Boomers would clinch their first major international men’s medal — from Olympics or World Cup competition — with a win. They’re 0-10 all time in those competitions when playing to secure a medal.

It’s also a matchup that will have U.S. coach Gregg Popovich and Australia point guard Patty Mills opposing one another. Mills was the last remaining member of the 2014 NBA champion Spurs — coached by Popovich — to play in San Antonio. Mills decided earlier this week to leave the Spurs as a free agent and sign with the Brooklyn Nets. That game will stream live on Peacock at 12:15 a.m. EDT and will re-air on NBC during its afternoon coverage and on NBCSN in primetime.

In the other semifinal, Slovenia’s Olympic basketball debut is already a smashing success behind Dallas Mavericks guard Luka Doncic. He's been the best player in the tournament and has flirted with triple-doubles in each of his past two games.

Now Doncic gets a chance to take his tiny nation to the gold medal game in Saitama. All that stands in Slovenia’s way is France, which knocked off the U.S. to open the Tokyo Games.

Doncic is a perfect 17-0 when playing for his national team. That game is live at 7 a.m. on NBC Sports Network.

The scheduling for women's soccer was clearly made for the U.S. women's team to play live for the gold medal — but the Americans did not advance out of the semifinals. So it will be Canada facing Sweden in a primetime medal match that was moved to USA Network with a 10 p.m. start.

It will be an early wakeup call to watch the Americans in the bronze medal match against Australia. The Matildas reached the medal round for the first time ever at an Olympics and desperately want to leave Kashima with the bronze.

The Americans are hoping to salvage a disappointing tournament, which included a scoreless draw against Australia in the final game of the group stage. Australia was also the only team to score on the Swedes, who play Canada for the gold.

The United States is the top-ranked team in the world and the defending World Cup champions, but goalkeeper Alyssa Naeher injured her right knee and won’t be available for the final match. Adrianna Franch will get the start in a match airing live at 4 a.m. on USA Network with an encore during primetime on NBC Sports Network.

The U.S. women's water polo team remains in the hunt for its third consecutive gold medal and faces the Russian Olympic Committee in the semifinals.

The Americans are 21-1 this year, with their lone loss coming against Hungary last week.

The men’s teams from Britain (1908-1920) and Hungary (2000-2008) are the only countries to win at least three straight water polo titles at the Olympics. The game is live at 2 a.m. on CNBC with replays during NBC's afternoon coverage and in primetime on NBC Sports Network.

It's the last chance to catch wildly popular skateboarding at the Tokyo Olympics with the men's park final.

The format is taken from the style of skateboarding that originated in Venice Beach, California, and features steeper edges of bowls and ramps. That enables higher velocity gains in shorter times — and probably plenty of awesome moves.

Heimana Reynolds from Hawaii represents the Americans in the competition that will air in coverage that begins at 2 a.m. on NBC Sports Network and then shown again on NBC in primetime coverage.