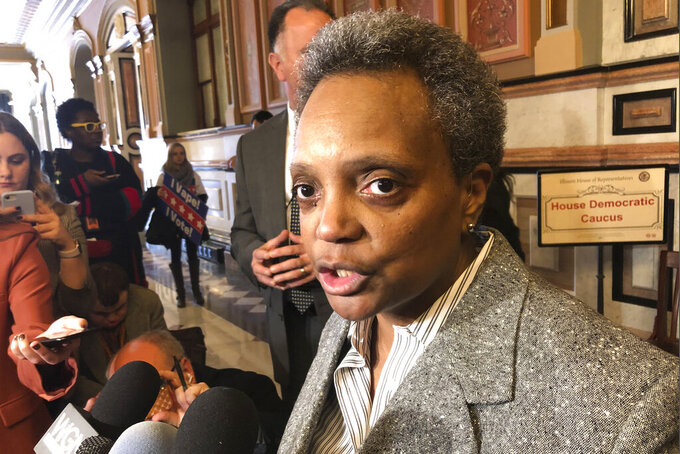 FILE - In this Nov. 12, 2019, file photo, Chicago Mayor Lori Lightfoot talks to reporters after meeting with House Democrats at the state Capitol, in Springfield, Ill. Lightfoot announced Wednesday, May 19, 2021, that she will grant one-on-one interviews to mark the two-year anniversary of her inauguration solely to journalists of color, saying she has been struck by the “overwhelming whiteness and maleness of Chicago media outlets.” (AP Photo/John O'Connor, File)

CHICAGO (AP) — Chicago Mayor Lori Lightfoot announced Wednesday that she will grant one-on-one interviews to mark the two-year anniversary of her inauguration solely to journalists of color, saying she has been struck by the “overwhelmingly" white press corps in Chicago.

“I ran to break up the status quo that was failing so many," Lightfoot, who is Black, tweeted, also issuing a detailed letter to City Hall reporters on her decision. "That isn’t just in City Hall. It’s a shame that in 2021, the City Hall press corps is overwhelmingly White in a city where more than half of the city identifies as Black, Latino, AAPI or Native American.”

While the move isn't unprecedented in recent years, it drew fierce scrutiny among the city's press corps and beyond with members of the media quickly taking Lightfoot to task for her decision.

Lightfoot's choice was made public late Tuesday when longtime WMAQ-TV political reporter Mary Ann Ahern, who is white, tweeted about it — a post that drew more than 5,000 comments. Some praised the mayor, while others were angry.

“I am a Latino reporter @chicagotribune whose interview request was granted for today. However, I asked the mayor’s office to lift its condition on others and when they said no, we respectfully canceled,” tweeted Chicago Tribune City Hall reporter Gregory Pratt. “Politicians don’t get to choose who covers them.”

Ahern voiced a similar concern about the mayor deciding who she'll talk to and said it looked like Lightfoot was avoiding City Hall reporters she often spars with.

“To choose a reporter based on the color of their skin is really pretty outrageous,” Ahern said on WGN Radio. “Does she think I’m racist? Is that what she’s saying?”

But others, including The TRiiBE, a Chicago-based digital Black-oriented media platform that offered extensive coverage of civil unrest in the wake of George Floyd’s death, among other topics, found the anger over the mayor’s decision offensive.

“With this outrage, y’all are implying that Black and Brown journalists aren’t capable of asking the hard questions,” TRiiBE tweeted Wednesday, saying it got an interview the same day.

Taking office in 2019, Lightfoot's tenure has been marked by racial inequality issues, including a Chicago teachers strike, city violence, the coronavirus pandemic and policing. In her two-page letter she recalled being on the campaign trail and being struck "by the overwhelming whiteness and maleness of Chicago media outlets, editorial boards, the political press corps, and yes, the City Hall press corps specifically.”

She noted the nation's reckoning on racism but said it didn't appear "many of the media institutions in Chicago have caught on and truly have not embraced this moment."

"The press corps is the filter through which much of what we do in government is dissected and explained to the public,” Lightfoot wrote. “And yet despite the many talents and skills of our reporting corps, I fear this arm of our democratic system is on life support. The Chicago media leadership must evolve with the times in order to be a true reflection of the vibrant, vast diversity of our city.”

Journalism has long grappled with lack of racial diversity. More than 75% of newsroom employees are white, according to a 2018 Pew Research Center analysis of census data. In turn, reporters of color note they're often shut out when scoring high profile interviews.

To counteract that, recent leading public officials have been intentional about giving interviews to journalists of color.

U.S. Interior Secretary Deb Haaland, the first Native American to lead a Cabinet department, granted the first interviews after confirmation to Native American journalists. The first sit-down interview Kamala Harris gave after being named vice presidential candidate was to The 19th, an outlet aimed at “elevating” women's voices, including those of color.

Meanwhile in Chicago, other city leaders were critical of Lightfoot's decision, including Alderman George Cardenas, who represents some largely Latino neighborhoods.

“How is that even true, be serious,” he tweeted in response to the announcement, saying it should be “corrected.”

Some media organizations said they were still being left out, including South Side Weekly. The nonprofit newspaper covers many heavily Black and Latino neighborhoods.

“Yes, for those who are asking, South Side Weekly did request an interview with @chicagosmayor and unsurprisingly received no response and no fancy letter. But we’ve never relied on the mayor’s script to do our groundbreaking work. So it’s just another day over here,” tweeted editor-in-chief Jacqueline Serrato.

Sophia Tareen is a member of The Associated Press’ Race and Ethnicity Team. Follow her on Twitter: https://twitter.com/sophiatareen.