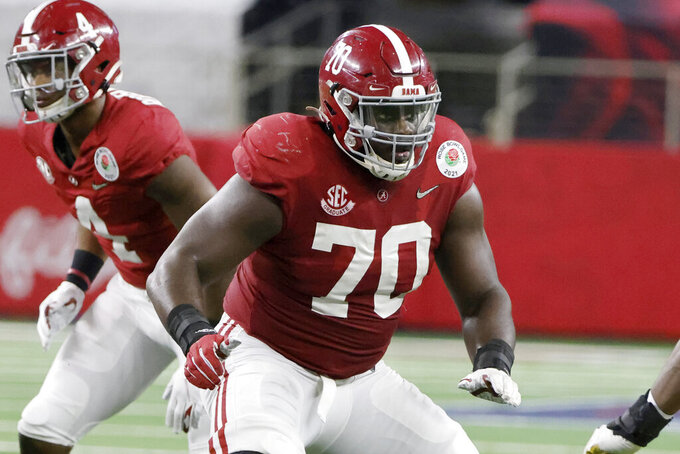 FILE - Alabama offensive lineman Alex Leatherwood (70) prepares to block against Notre Dame during the Rose Bowl NCAA college football game in Arlington, Texas, in this Friday, Jan. 1, 2021, file photo. The Kansas City Chiefs already have spent the offseason rebuilding an offensive line ravaged by injuries and then dominated by Tampa Bay in the Super Bowl. But there is still work to be done, and the next opportunity to provide some help up front for quarterback Patrick Mahomes is the NFL draft.(AP Photo/Michael Ainsworth, File)

KANSAS CITY, Mo. (AP) — Kansas City Chiefs quarterback Patrick Mahomes has only watched the Super Bowl twice since the night the Tampa Bay Buccaneers gave him quite possibly the worst beating of his professional career.

Now, the Chiefs have used the NFL draft to make sure that doesn't happen again.

The two-time and defending AFC champs traded a package of picks, including the No. 31 overall selection, to the Ravens on Friday for two-time Pro Bowl offensive tackle Orlando Brown Jr.. He'll anchor a revamped offensive front that will include free-agent guard Joe Thuney, former All-Pro lineman Kyle Long and new center Austin Blythe.

So much for all those mock drafts that had Kansas City taking an offensive tackle in the first round.

The trade also sent third- and fourth-round selections to Baltimore while a second-rounder went back to Kansas City, and included a swap of the Chiefs' fifth-round pick and the Ravens' sixth-rounder in 2022. Brown must pass a physical so the trade becomes official sometime before Thursday night's first round.

As it stands, the Chiefs gave up their lone pick on Day 1 for a sure thing on Mahomes' blind side.

The Chiefs saw firsthand in the Super Bowl the problems that arise when opt-outs and injuries hit the big boys up front. And while they stand to have entirely new offensive line from the injury-ravaged front five that allowed the Bucs to shut down the potent Kansas City offense in a 31-9 rout in the Super Bowl in February, the Chiefs remain in such dire need of depth that they could well use one of their two second-round picks on more help.

“I like the way this draft looks,” Chiefs general manager Brett Veach said before swinging the Brown trade. “The draft looks really talented on the offensive line, so I think it will be a combination of what we have in-house and blending that in with some new talent, potentially in free agency and potentially in the draft.”

Along with bringing in Thuney, Long and Blythe and trading for Brown, the Chiefs are poised to have two players back that opted out last season. Third-round pick Lucas Niang skipped his rookie season for personal reasons while starter Laurent Duvernay-Tardif opted out to spend the season helping COVID-19 patients in his native Canada.

If the Chiefs stick with tackle at No. 58, their initial selection in the draft, there could still be several talented options at one of the deepest positions available: Samuel Cosmi of Texas, Jalen Mayfield of Michigan and perhaps Dillon Radunz of North Dakota State are among those that could still be on the board.

But the trade for Brown also takes away some of the pressure to draft an offensive lineman, giving Veach and coach Andy Reid carte blanche to fill needs at wide receiver, linebacker, pass rusher and defensive back instead.

“At the end of the day, I trust in Veach and I trust in Coach Reid to make the right decision for the betterment of the team,” Mahomes said last week. “If they ask me, I'll give my input and do that different type of stuff, but they have a pretty good track record of getting great players in this building.”

After picking at No. 58, the Chiefs have another selection five slots later at 63. But that's it until their fourth-round pick acquired as compensation for the loss of cornerback Kendall Fuller in free agency. The Chiefs also have two picks in the fifth round and a final selection in the seventh round.

The trade for Brown is another example of how Veach is one of the most aggressive GMs in the league. Just because the Chiefs no longer have a first-round pick doesn't mean they couldn't trade back in for the right player, or trade backward with one of their second-round picks in an attempt to acquire more draft capital.

WIN ON THE CHEAP

The Chiefs had to get creative with the salary cap just to accomplish what they did in free agency, and they won’t get relief anytime soon with a number of long-term contracts on the books. That makes it even more important that the Chiefs don’t miss on the draft, where they could land a handful of useful players on cheap rookie contracts.

Along with protecting Mahomes, the Super Bowl revealed a glaring need to better pressure opposing quarterbacks. The Chiefs added defensive tackle Jarran Reed in free agency, but they could use another edge rusher opposite Frank Clark, and upgrades at linebacker and cornerback would give the big boys up front more time to work.

“We’ll invest in the offensive and defensive lines and we’ll fill in the skill as we go along,” Veach said. “Once you get the things that you have to have in place, then I think you can be more patient and let market and free agency come to you.”

The Chiefs surprisingly added running back Clyde Edwards-Helaire to their offense in the first round last year. This year, they could give Mahomes another wide receiver in the draft after losing Sammy Watkins to free agency and with Mecole Hardman yet to prove he can be a reliable No. 2 alongside Tyreek Hill.