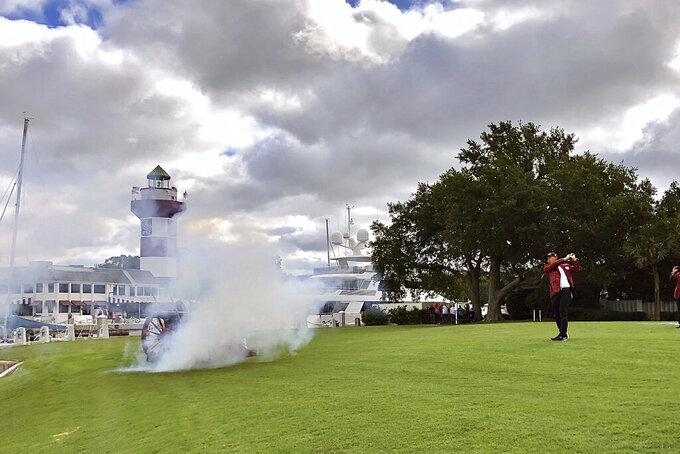 HILTON HEAD ISLAND, S.C. (AP) — The ambiance of Hilton Head doesn't change, a most peaceful setting among shade of oaks along the Calibogue Sound. Adding to the serenity this week is the absence of spectators for the second straight week on the PGA Tour.

It's the calendar that makes all the difference.

The RBC Heritage for years has been held the week after the Masters, a time to exhale after the buildup to the first major of the year. Thanks to this shortened season brought on by the COVID-19 pandemic, now is not the time to relax for some players.

Dustin Johnson is No. 115 in the FedEx Cup standings with nine events left before the postseason starts. Brooks Koepka is at No. 204, and only one player over the last decade has been out of the top 200 this late in a season and made it to the playoffs.

Johnson still feels relaxed. Remember, this is a guy who said his pulse increases only when walking up a hill, the player who kept his cool even when he didn't know the score in the U.S. Open he won.

Still, there is an urgency typically not found at Harbour Town Golf Links.

“I need to have a few good weeks here to kick off this restart, but I haven't played a lot of golf,” Johnson said. “This is sixth tournament of the season. So, yeah, it's time to start playing well.”

He will be competing against the best again. Golf was shut down for three months because of the pandemic, and players clearly are eager to get going. The top five in the world are in the field for the second straight week, and Hilton Head has a roster of stars it doesn't always get.

“It feels great to look down the range and see ... most of the top players in the world here,” said Rory McIlroy, at Hilton Head for the first time since 2009. “We all want to play against the best fields week in, week out. I guess its silver lining to all this is that it seems like all the top guys are going to play a little more often going forward, and that’s a good thing for the tour and for us and for the people at home that are watching.”

There will even be some watching in person.

Spectators are banned for the first five tournaments. Colonial still had a dozen or so people peer through a chain-link fence on the perimeter of the Fort Worth, Texas, golf course, and three houses had makeshift hospitality tents and grandstands.

Harbour Town is lined with villas and vacation homes, and even during a practice round Wednesday, several homeowners or guests were on the deck with their morning coffee or “5 o'clock somewhere” drink, watching players pass by.

Ropes line the fairway, giving it the feel of a regular PGA Tour event. In this case, ropes also run along backyards. People can watch from their homes, but they can't come onto the course.

It was an eerie feeling for five-time champion Davis Love III, playing Hilton Head for the 31st time.

“When I turned the corner at 16, it was like, ‘Holy cow!’ I mean, the other holes looked strange, but when you turn the corner on 16 and there's beautiful oak trees and you see all the way to Daufuskie (Island), I'm like: ‘Wow. Where are we?’” Love said. "You stand there on 17 green and can see all the way to the lighthouse without walking around the big sky box.

“It's a strange feeling not to have the gallery."

The course isn't exactly the same, either, because the tournament is two months later. The rye seed has given way to Bermuda, with limited rough and chipping around the greens that will be different.

But at least they're playing. The RBC Heritage originally was canceled this season when the tour wiped out four weeks at the start of pandemic, and then four events after that (the Masters was moved to November). But when the U.S. Open moved to September and the Canadian Open couldn't be played, there was room for Hilton Head.

The winner on Father's Day will get a tartan jacket, not a U.S. Open trophy.

Meanwhile, the PGA Tour did not report any positive tests for the new coronavirus, from those who were tested Saturday to get on the charter flight to those who traveled on their own and were tested upon arrival at Hilton Head.

And then it was back to work, particularly for the likes of Johnson. The former No. 1 player in the world has gone 20 tournaments without winning dating to late February 2019, a long time by his standards and talent.

“I know what I need to work on. I know what I haven't really done that well. So it's not really rocket science,” Johnson said. “I just need to play a little better.”