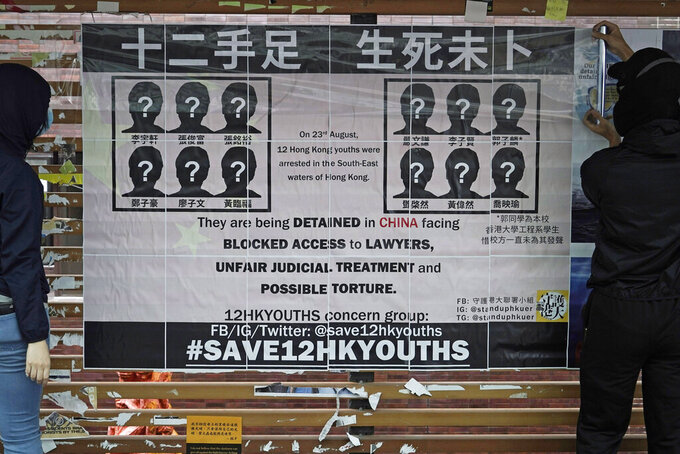 FILE - In this Sept. 29, 2020, file photo, university students put up posters to demand of releasing the 12 Hong Kong activists detained at sea by Chinese authorities, at "Lennon Wall" in the University of Hong Kong. Lu Siwei, who represented one of 12 Hong Kong activists who tried to flee to Taiwan, had his license revoked by the Sichuan Provincial Justice Department in a formal notice given Friday, Jan. 15, 2021. (AP Photo/Kin Cheung, File)

TAIPEI, Taiwan (AP) — A Chinese lawyer who represented a Hong Kong pro-democracy activist was stripped of his license amid efforts by Beijing to crush opposition to its tighter control over the territory.

Lu Siwei, who represented one of 12 Hong Kong activists who tried to flee to Taiwan, had his license revoked by the Sichuan Provincial Justice Department in a formal notice given Friday.

Ten of the 12 activists caught at sea in August were sentenced by a Shenzhen court in December to prison terms ranging from seven months to three years for illegally crossing the border and organizing illegal border crossings.

They are part of an exodus of Hong Kong residents following Beijing's imposition of a tough new security law they say is destroying the territory’s Western-style civil liberties. Since the law was introduced in response to anti-government protests that began in 2019, dozens of pro-democracy activists have been arrested or detained.

The law has been denounced by European nations, the U.S. and others.

Beijing, which requires lawyers to swear an oath of loyalty to the ruling Communist Party, has tightened control over the profession. Other lawyers have been stripped of their licenses for representing defendants in politically sensitive cases. Some have been imprisoned.

In a notice last week, the Chengdu office of the Sichuan Justice Department said Lu had violated laws on professional legal conduct. It accused him of making comments online that had a “negative impact on society.”

Also last week, Ren Quanniu, another lawyer for one of the 12 activists, was notified by the Zhengzhou office of the Henan Justice Department that he could lose his license. He was told that comments he made in court had caused a “negative impact on society.” His hearing is still pending, but is seen as a formality.

On Wednesday, Ren and a small group of supporters showed up at the hearing for Lu's license in Chengdu to back him. They were forcibly separated by police and Lu was taken inside alone, Ren said.

Both Lu and Ren were hired by families of the activists, but were blocked from seeing their clients throughout the legal process.

“They wouldn’t even let me in the front door, much less the door to the administrative area where you deal with the paperwork,” Ren said of his attempted first visit to a police station in Shenzhen, where the Hong Kong activists were taken by authorities.

On his second visit, he was told that his client had already agreed to a court-appointed lawyer.

Throughout the case, families of the activists protested that they should be able to use lawyers they selected instead of the court-appointed lawyers.

Lu has been summoned often by the local bureau of the Justice Department in Chengdu for meetings in which the bureau officials told him to leave the case.

Neither Lu or Ren backed down. “Why should I quit when there’s no legal reason for me to quit? How can I explain myself to the family?” Ren told The Associated Press.

The two lawyers both have a history of taking on sensitive cases, and of navigating the fraught and murky waters of defending people who are deemed to be political targets by authorities.

Ren has handled cases related to the Falun Gong, a spiritual movement which China has labeled a cult and is the subject of persecution after its followers protested in Beijing's Tiananmen Square in 1999. Most recently, he represented citizen journalist Zhang Zhan, who was sentenced to four years in prison for attempting to report on the situation in the city of Wuhan during the onset of the coronavirus pandemic early last year.

Lu, an insurance lawyer by trade, has handled cases in a crackdown on human rights lawyers and activists led by President Xi Jinping which began in 2015. Lu defended prominent human rights lawyer Yu Wensheng, who had criticized Xi.

Still, neither was prepared for how sensitive the case of the 12 activists would be.

“They can’t punish anyone else. Can they punish the European media? Can they punish Pompeo? They can only take it out on us because we are lawyers in the mainland," Lu said.