A city wrestled down an addiction crisis. Then came COVID-19 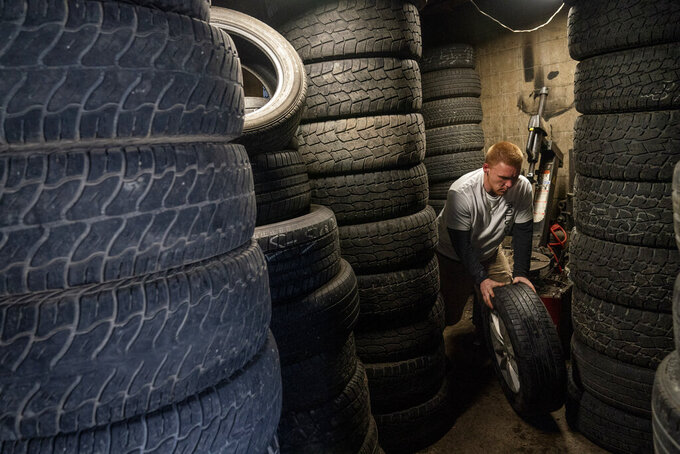 Steven Ash, 33, works at the tire shop his family owns in Huntington, W.Va., Wednesday, March 17, 2021, and where he overdosed just days before. Ash was 19 when he took his first OxyContin pill and his life spiraled after that. The last year has been particularly brutal. He took more drugs to numb the pain, but it made things worse, a vicious cycle, he said, but he isn't sure how to escape it. He knows he's putting his mother through hell. "I fight with myself every day. It's like I've got two devils on one shoulder and an angel on the other," he said. "Who is going to win today?" (AP Photo/David Goldman) 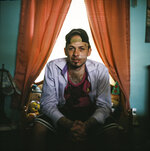 HUNTINGTON, W. Va. (AP) — Larrecsa Cox steered past the used tire shop, where a young man collapsed a few days before, the syringe he’d used to shoot heroin still clenched in his fist.

She wound toward his house in the hills outside of town. The man had been revived by paramedics, and Cox leads a team with a mission of finding every overdose survivor to save them from the next one.

The man’s mother stood in pink slippers in the rain to meet her. People have been dying all around her.

“People I’ve known all my life since I was born, it takes both hands to count them,” she said. “In the last six months, they’re gone.”

As the COVID-19 pandemic killed more than a half-million Americans, it also quietly inflamed what was before it one of the country’s greatest public health crises: addiction. The Centers for Disease Control and Prevention estimates that more than 88,000 people died of drug overdoses in the 12 months ending in August 2020 — the latest figures available. That is the highest number of overdose deaths ever recorded in a year.

The devastation is an indictment of the public health infrastructure, which failed to fight the dueling crises of COVID-19 and addiction, said Dr. Michael Kilkenny, who runs the health department in Cabell County, which includes Huntington.

Simultaneously, Kilkenny said, disruptions in health care exacerbated the collateral consequences of drug use — HIV, hepatitis C, deadly bacterial infections that chew flesh to the bone and cause people in their 20s to have open-heart surgeries. There were 38 HIV infections tied to injection drug use last year in this county of fewer than 100,000 people — more than in 2019 in New York City.

Huntington was once ground zero for the addiction epidemic. On the afternoon of August 15, 2016, 28 people overdosed in four hours in Huntington. Connie Priddy, a nurse with the county’s Emergency Medical Services, describes it as their “day of reckoning.”

By 2017, the county had an average of six overdoses a day. Some businesses changed out their bathroom lightbulbs to blue — to make it harder for drug users to find a vein.

They couldn’t ignore it anymore. The county got two grants and selected Cox, a paramedic, to lead a crew of addiction specialists, faith leaders and police officers who crisscross the county, tracking down people who overdosed. “Facing addiction? We can help,” reads the decal plastered on the side of the Ford Explorer.

If the people they find are ready for treatment, they get them there. If they aren’t, they give them the overdose-reversal medication naloxone and other supplies to try to help them survive in the meantime.

A white board in their office lists the names of clients they’ve ushered into treatment — about 30% of those they’re able to track down. After two years, the county’s overdose calls dropped by 50 percent.

The federal government honored Huntington as a model city. Other places came to study their success.

The first couple months of the pandemic were quiet, said Priddy, who coordinates the team and tracks their data. Then came May. There were 142 EMS calls for overdoses, nearly as many as in the worst of their crisis.

By the end of 2020, Cabell County’s EMS calls for overdoses had increased 14% over the year before.

“That makes us sick,” Priddy said, but she’s heard from colleagues in other counties that their spike was twice as high.

The CDC estimates that across the country overdose deaths increased nearly 27% in the 12-month span ending in August 2020. In West Virginia, fatal overdoses increased by more than 38%.

Report after report arrived on Cox’s desk. In October, she saw a name of a woman she knew well and lost her breath: Kayla Carter.

Carter had a brilliant mind for math and loved the stars. Her family always thought she’d grow up to work for NASA.

Instead, she was addicted to opioids by the time she turned 20.

“We went through living hell,” said her mother, Lola.

Carter overdosed dozens of times. At 30 years old, she already walked with a cane that she painted her favorite color, pink. Infection coursed through her body. She had Hepatitis C and HIV.

As Huntington tries to beat back the damage the pandemic has done, Priddy said it feels like their own state is working against them. The state legislature is pushing a bill to strictly limit needle exchange programs, citing the dangers of discarded syringes.

Syringe programs have been the subject of decades of scientific study. The CDC describes them as “safe, effective, and cost-saving,” — they do not increase drug use, studies have found, and they dramatically cut the spread of HIV.

Priddy sent her legislator a message imploring that if they restrict syringe exchanges, many more will die.

Carter was hospitalized last summer with endocarditis, a heart infection from using dirty needles. Her parents stood at her bedside and thought she looked 100 years old. They cried all the way home.

She stayed off drugs when she got out of the hospital. She gained 30 pounds. She said she was sorry for all she’d missed: babies born, birthday parties, funerals. They thought they had her back.

Then she stopped answering calls. Her mother went to her apartment and found her dead on her bathroom floor.

They are still waiting for the medical examiner’s report, but her father Jeff, a retired paramedic, would rather never see it. It brings him comfort to think she died from complications from her surgeries, and not that she relapsed and overdosed.

Now the box of her ashes sits in their living room. Her mother talks to them every night, then cries herself to sleep.