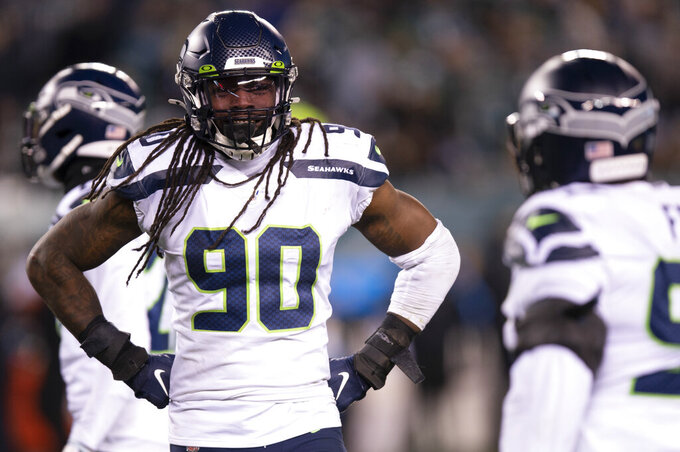 FILE - In this Sunday, Jan. 5, 2020 file photo, Seattle Seahawks defensive end Jadeveon Clowney (90) looks on during an NFL wild-card playoff football game against the Philadelphia Eagles in Philadelphia. The Browns are taking another run at Jadeveon Clowney. The free agent defensive end visited Cleveland on Wednesday, March 24, 2021 reviving a courtship that began last year before the No. 1 overall pick in 2014 signed with the Tennessee Titans. Because of the COVID-19 pandemic, the sides couldn't meet last year.(AP Photo/Chris Szagola, File)

CLEVELAND (AP) — The Browns are taking another rush at Jadeveon Clowney.

The free agent defensive end visited Cleveland on Wednesday, renewing a courtship that began last year before the No. 1 overall pick in 2014 signed a one-year, $13 million deal with the Tennessee Titans just before the start of the season.

Because of the COVID-19 pandemic, Clowney and the Browns couldn't meet in person last year and this meeting was described as “exploratory” by the team.

The Browns have been trying to sign a proven edge rusher to pair with All-Pro end Myles Garrett, and Clowney could be the answer — for the right price. Cleveland made him a substantial offer — reportedly the highest one — last year but Clowney elected to play for Tennessee.

A year ago, Cleveland was coming off a 6-10 season and yet another coaching change. But the Browns look much more attractive this time around after going 11-5, making the playoffs for the first time in nearly two decades and getting to the second round of the postseason.

Clowney's one season with the Titans didn't go so great as he didn't have a sack in eight games before undergoing knee surgery. The 28-year-old has 32 career sacks, and had his best season in 2017 with Houston, getting 9 1/2 sacks.

Cleveland made several upgrades to its defense in free agency last week. Former Falcons end Takk McKinley, a 2017 first-round pick who has had some problems in recent years, signed a one-year, $4.25 million deal with the Browns.

But McKinley isn't Clowney, not a healthy Clowney anyway, and the Browns are considering him again.