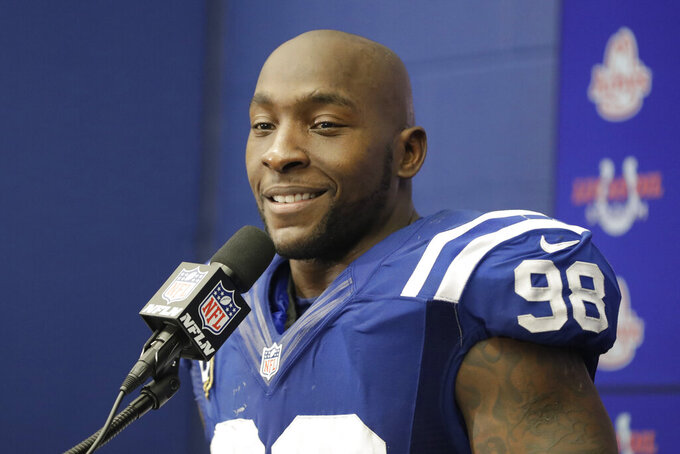 FILE - In this Jan. 1, 2017, file photo, Indianapolis Colts linebacker Robert Mathis speaks during a news conference following an NFL football game against the Jacksonville Jaguars in Indianapolis. Mathis, the Indianapolis Colts career sacks leader, will be inducted into the Indianapolis Colts Ring of Honor later this year. The ceremony will take place at halftime of its Nov. 28 game against Super Bowl champion Tampa Bay. Team officials announced the rescheduled event Monday, May 17, 2021. Mathis was supposed to become the 17th honoree last season but the induction was postponed because of the COVID-19 pandemic. (AP Photo/Darron Cummings, File)

INDIANAPOLIS (AP) — Robert Mathis, the Indianapolis Colts' career sacks leader, will finally be inducted into the team's Ring of Honor on Nov. 28.

He was supposed to become the 17th honoree last fall but the ceremony was postponed because of the COVID-19 pandemic. The rescheduled ceremony will take place at halftime of Indy's game against Super Bowl champion Tampa Bay.

The Colts drafted Mathis in the fifth round of the 2003 draft. Over the next 14 seasons, all in Indy, Mathis had a franchise-record 123 sacks, 52 forced fumbles 18 passes defensed and 17 fumble recoveries, three of which he returned for touchdowns.

He was an All-Pro in 2013 when he won the league's sacks title, won one Super Bowl ring and was selected to six Pro Bowls. Mathis finished No. 17 on the league's career sacks list, had an NFL record 47 strip-sacks and later served as an assistant coach with the Colts.

For more than a decade, Mathis teamed with Dwight Freeney to form one of the NFL's fiercest pass-rushing tandems. Freeney became a Ring of Honor member in 2019.

“He was undersized and underrated, but he made up for it with a motor that wouldn’t quit and a flawless technique that outmatched the most talented lineman in the league," Colts owner Jim Irsay said in a statement. “To watch him strip-sack the quarterback — which he did better and more than anyone in NFL history — was a thing of beauty. What’s more, Robert has stayed connected to the horseshoe and has helped guide and teach our next generation of players."