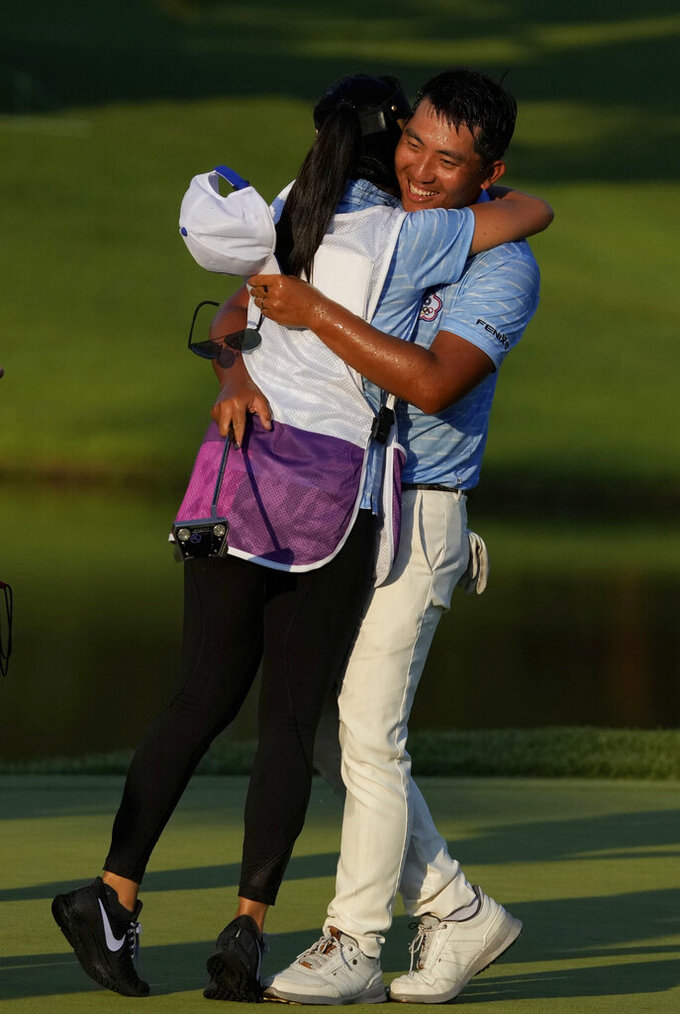 Cheng Pan of Taiwan is congratulated by his caddie after winning the bronze medal during the final round of the men's golf event at the 2020 Summer Olympics on Sunday, Aug. 1, 2021, in Kawagoe, Japan. (AP Photo/Andy Wong)

KAWAGOE, Japan (AP) — Her heart rate hit its peak only when Nelly Korda stood on the Olympic podium, not when she had a putter in her hand with a gold medal hanging on every shot.

Six days earlier, the father of Xander Schauffele was the essence of calm as he shared his views in German and English, depending on who was asking. But as his son turned to face the three flag poles to the left of the 18th green and the Star-Spangled Banner played, Stefan Schauffele was an emotional mess. He could barely say “anthem” without choking up.

“Nobody is going to play the anthem for you when you win the Masters, right? That level of pride doesn't exist in the Masters,” the father said. “It's not a fifth major. But the importance of it is just like a major.”

The second edition of golf's return to the Olympics captured a spirit of the games that is sure to build over the next three years until Paris, and then onward to Los Angeles and Australia.

It's not the fifth major, or even the sixth one.

Schauffele wouldn't know the difference because while the gold medal elevated him into the elite in golf, he has yet to win a major. It felt no less special.

Korda won a major and a gold medal in a span of 42 days, and even she doesn't know the difference, not does she care to make the distinction.

“It’s amazing to be a gold medalist, to even just be an Olympian and to represent your country,” she said. “You have to be the top of the top to come to the games. But I wouldn’t say one win is more special than the other because they all are special.”

The only difference is they have a trophy that only two others have — Justin Rose and Inbee Park from Rio de Janeiro in 2016 — and no one else can get until the Olympics go to Le Golf National outside Paris in 2024.

That's what makes the Olympics unique, even if it looks and feels like any other tournament.

Golf will never get away from 72 holes of stroke play, nor should it. The Olympics is about finding the best player, not about finding a fancy format to get attention.

And this time, it delivered.

Both winners had a three-shot lead on the back nine only for it to be decided on the final hole.

Schauffele made a 6-foot birdie putt on the 17th hole to regain the lead and won by getting up-and-down from 98 yards.

Korda closed with five pars and was helped by Mone Inami making bogey on No. 18 from a plugged lie in the bunker. Korda wears a Whoop band, which reported her heart averaged 128 beats per minute during the final round, and hit 154 when she was on the podium.

Both competitions had playoffs — Inami for the silver medal over Lydia Ko, while C.T. Pan had to go four extra holes to win a seven-way playoff for the bronze.

It was different in Rio. It’s rare to find a 1-2-3 finish with no ties at any tournament, and it happened in both events at the 2016 Olympics.

Rose and Henrik Stenson were tied going to the 18th and Rose won it with a pitch to 3 feet for birdie. Matt Kuchar shot 63 to win the bronze by four shots over fourth place. Park led by at least three shots the entire back nine.

For the most part — and this was never more evident than two weeks at Kasumigaseki Country Club — golf moves like a tanker across the ocean for three days, and then the shell of the ship breaks apart and it transforms into a speed boat for the final two hours.

It can be exciting. It just takes a while.

All that's missing from the Olympics is a team medal, and International Golf Federation officials are optimistic that will be in place for Los Angeles in 2028, presumably at Riviera.

Some players will have their doubts. Adam Scott, among three players who have twice turned down their spots, doesn't believe golf belongs in the Olympics at the expense of other sports that don't have four majors a year.

Rory McIlroy of Northern Ireland didn't like being forced to choose between Ireland and the UK. He famously dismissed the Olympics in 2016 when he said he had no regrets about not going. And while he would watch on TV, golf probably wouldn't be on his list. “Probably the events like track and field, swimming, diving, the stuff that matters.”

He showed up for the Tokyo Olympics and changed his mind in a big way, long before he was eliminated in the seven-way playoff.

“I made some comments before that were probably uneducated and impulsive,” he said. "But coming here and experiencing it, seeing, feeling everything that goes on — not just Olympic golf but just the Olympics in general — that sort of Olympic spirit has definitely bitten me.

“I need to do a better job of just giving things a chance, experiencing things, not writing them off at first glance,” he said. “That’s sort of a trait of mine, but I’m happy to be proven wrong.”

Not quite as happy as Schauffele and Korda, but no less excited about Paris.