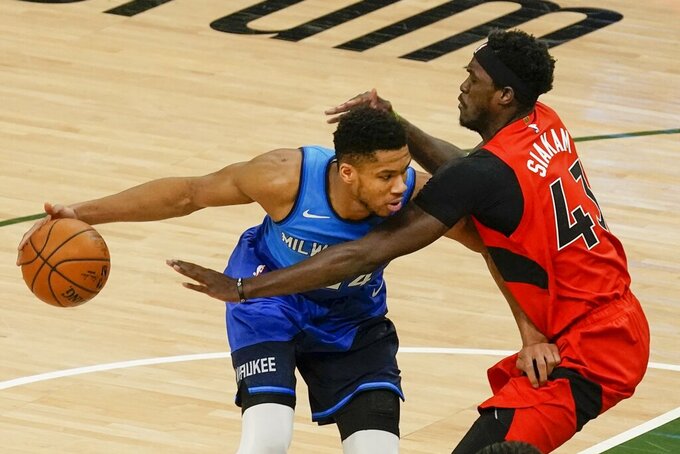 Milwaukee Bucks' Giannis Antetokounmpo tries to get past Toronto Raptors' Pascal Siakam during the first half of an NBA basketball game Thursday, Feb. 18, 2021, in Milwaukee. (AP Photo/Morry Gash) 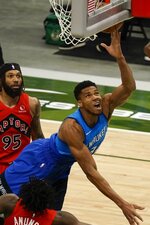 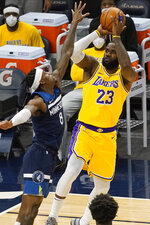 ATLANTA (AP) — The NBA had done a lot of things right during the pandemic.

For absolutely no justifiable reason other than boosting its bottom line, the NBA is going through with dubious plans to stage a made-for-TV All-Star Game in Atlanta on March 7.

Yep, the league is holding an exhibition game — a totally unnecessary contest — while the country is still in the grips of a deadly virus.

The NBA is trying to sell this as some sort of altruistic pursuit, joining the players' union in pledging to donate more than $2.5 million to support historically black colleges and universities, as well as communities impacted by COVID-19.

“The All-Star Game will honor the vital role HBCUs play in our communities and focus attention and resources on COVID-19 relief, particularly for the most vulnerable,” NBA Commissioner Adam Silver said in a statement filled with such spin it left us a bit dizzy.

He failed to mention that his league — which has 30 franchises worth an average of more than $2 billion each — could've made that sort of donation from its spare change jar.

The Pandemic All-Star Game is nothing more than a money grab, an attempt by the league to mitigate its financial losses amid the coronavirus pandemic.

Led by the biggest star of them all, the players saw through the charade as soon as the idea was floated a few weeks ago.

LeBron James, who has played in 16 All-Star Games and will again be a captain for this one, called it “a slap in the face” to the players. Two-time reigning league MVP Giannis Antetokounmpo said he would much prefer to have a few days off.

“If they tell us we’re going to show up, then we’ve got to do our job,” the Milwaukee Bucks megastar said when the subject first came up. “I will show up and set the right example. But at the end of the day, I don't want to do it.”

This is a major misstep by a league that drew much-deserved kudos last summer for setting up a stringent bubble inside Walt Disney World, allowing it to complete the regular season and the playoffs without so much as a single positive test.

The NBA also managed to deftly navigate the social justice protests that roiled America, staving off a possible player boycott by listening to their concerns and embracing the cause.

But this season has been a struggle. Without a bubble, 30 games have already been postponed because COVID-19 protocols. Teams are playing in largely empty arenas because it's simply not safe enough to allow large crowds.

This year's All-Star Game, which was supposed to be held in Indianapolis, was initially called off because the league recognized the folly of attempting to hold its biggest party — a city-wide, weekend-long celebration — in the midst of a highly contagious virus that has caused so much heartache.

But that all changed as the league tallied up its financial losses from the first two months of the season. The All-Star Game was a way to mitigate the damage, giving valued TV partner Turner Sports one of its signature events — even though it comes without all the usual bells and whistles.

No parties are planned. Only about 1,500 fans — representing local HBCUs and essential workers — will be allowed at 17,000-seat State Farm Arena for the game, which also will feature a skills competition beforehand and a Slam Dunk competition at halftime.

This will be an All-Star Game catering strictly to those watching at home, an audience that Silver estimates at 130 million around the globe.

But the players' clear disdain for playing the game — not to mention all those empty seats — will undoubtedly suck much of the joy from the antics we've grown to love.

The outrageous shots. The dizzying dunks. The good-natured trash talk.

“The ultimate experience of the weekend isn’t there,” Washington Wizards star Bradley Beal said. “It’s mainly for the fans, for entertainment.”

“All-Star is a part of our league, no different than the games we play,” he said Thursday night during an interview on TNT. “It begins and ends with the fans. This is an event our fans love to see. They love to see the players come together.

“But,” he added ruefully, “nothing comes without controversy during a pandemic.”

Silver said he's not overly concerned about the league's best players contracting the virus during their brief time in Atlanta, since they will be confined to a bubble similar to the one that worked so well in Orlando.

He's probably right about that one.

A bigger risk is reckless fans converging on Atlanta by the thousands to take part in impromptu parties, the kind that gridlocked the city the last time it hosted the All-Star Game in 2003.

Clearly concerned about the threat of a super-spreader event, Mayor Keisha Lance Bottoms did her best to turn people away with a hefty dose of Southern inhospitality.

“I have shared my concerns related to public health and safety with the NBA and Atlanta Hawks,” she said. "We are in agreement that this is a made-for-TV event only, and people should not travel to Atlanta to party.”

The mayor pointed out there will be “no NBA-sanctioned events open to the public” and strongly encouraged local bars and nightclubs “not to host events in the city related to this game.”

Given the way so many Americans have flaunted COVID-19 guidelines, good luck with that request.

In the meantime, the NBA is carrying on with this ludicrous event.

Toronto Raptors coach Nick Nurse, whose team has been playing its home games in Tampa because of virus-related travel restrictions in Canada, spoke carefully when asked about the wisdom of playing the All-Star Game.

“It's obviously going to be different this year,” Nurse said. "I trust our leaders know what they’re doing and leave it at that.”

Silver & Co. have done a lot of things right.

This time, though, they got it all wrong.

AP Sports Writers Steve Megargee in Milwaukee and Stephen Whyno in Washington contributed to this column.