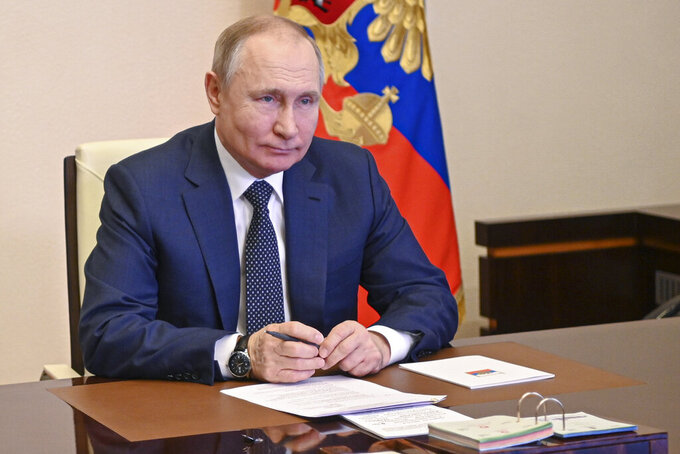 In the midst of Russia's brazen invasion of Ukraine, sports has again become intertwined with the grim realities of the world.

This is nothing new, of course. Germany was banned from the Olympics after both world wars. South Africa was long a sporting pariah over its apartheid system. The United States boycotted the 1980 Moscow Games as retribution for the Soviet invasion of Afghanistan.

“It's naïve for anyone to think sports and politics don't mix at all,” Olympic historian Bill Mallon said Friday. “In an ideal world, they wouldn't. But I don't know how you get around it.”

Sadly, there is nothing to indicate that Vladimir Putin will suddenly have a change of heart because his country's athletes are barred from the international stage.

When Germany and its allies were banished from the Olympics after World War I, it hardly prevented an even more horrifying conflict from erupting less than two decades later.

Along the way, Adolf Hitler used the 1936 Summer Olympics to score major propaganda points for a regime that was already on a clear path to igniting World War II.

South Africa was first banned from the Olympics in 1964, but it would take another quarter-century for its evil system of racial segregation to fall — and there's little to indicate that sports played a major role in the epic transformation.

“I don't think the boycotts contributed to the end of apartheid,” said Angelo Fick, a political analyst in South Africa.

Ditto for the U.S. Olympic boycott of 1980, which led mainly to the Soviet Union launching its own boycott of the Los Angeles Games four years later. The Soviets didn't bail out of Afghanistan until 1989.

That's not to say the International Olympic Committee and most other major governing bodies were out of line when they quickly ousted Russia and its accomplice, Belarus, for waging a seemingly unprovoked war against a neighboring country.

But no one should look at these sporting sanctions through rose-colored glasses.

“I don't think it has that much influence,” said Usha Haley, a professor of international business and management at Wichita State University who extensively studied the effects of sanctions in South Africa. “Yes, there's a symbolic influence, and symbolism does matter. Appearing righteous does matter. But will it actually change anything? That's unlikely.”

Mallon even predicts that Russia will try to launch its own Olympic-style competition if the IOC ban remains in effect heading into the 2024 Paris Games.

While such an undertaking would be especially challenging given the financial pain Russia is feeling, and the chances of surviving against the behemoth that is the Olympics are extremely slim, Putin's ego could very well lead him down that quixotic path.

“I think they're going to end up doing a breakaway Olympics if they continue to be banned for very long,” Mallon said.

Again, history provides a bit of a guide.

In 1936, a People's Olympiad was planned for Barcelona to protest the Summer Olympics being held in Nazi Germany, drawing support from a sizable number of athletes as well as the Soviet Union.

The outbreak of the Spanish Civil War scuttled those plans, and the alternate Olympics became a footnote in history when World War II broke out three years later.

Mallon points to another Olympic-style event that did actually get off the ground in the midst of the Cold War.

After being suspended by the IOC over its politically charged hosting of the 1962 Asian Games, in which Taiwan and Israel were denied entry, Indonesia launched its own sporting organization, GANEFO, or Games of the New Emerging Forces.

Indonesian leader Sukarno, who had declared the Olympics to be “a tool of the imperialists and colonialists,” welcomed a total of 51 nations to the inaugural GANEFO in 1963, though many did not send their top athletes for fear of reprisal from the IOC.

The People's Republic of China, which at the time was not recognized by the IOC, dominated the medal table. A team from “Arab Palestine” also participated.

An Asian-only GANEFO was held in 1966, but plans for another full-scale games the following year in Cairo, Egypt were scuttled.

While the world seems largely united against Putin's Russia at the moment, Mallon can foresee Moscow pulling together some sort of GANEFO-style competition in 2024 if the Olympics are off limits.

Countries such as Belarus, Syria and North Korea would likely participate, Mallon said, and don't rule out China and India — which have been reticent about fully condemning the Ukraine invasion — sending teams to a Moscow-led competition even if they're also taking part in the Paris Games.

In the meantime, the IOC-led sanctions against Russia and Belarus will undoubtedly raise more questions about the propriety of sports taking a side in these sort of conflicts.

As always, the brunt of the impact will be borne by the athletes, many of whom have no stake in the political machinations of the country they happened to be born in. Then again, that pain is nothing compared to the horrors being faced by the citizens of Ukraine.

Also, there are sure to be accusations of a double-standard favoring Western nations, charges Putin will undoubtedly try to use to rally support at home.

“The U.S.-led Olympic boycott (in 1980) was an objection by the United States to the invasion of Afghanistan, when just five years earlier they had withdrawn from their own disastrous misadventure in Vietnam,” Fick pointed out. “It's not an even-handed situation.”

In an ideal world, there would never be any need to comingle sports with political machinations or the horrors of war.

Unfortunately, that ship sailed long ago.