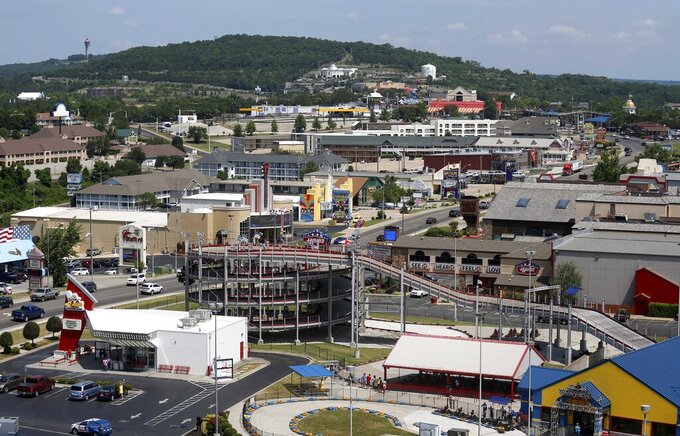 Branson, Mo., is seen from this view atop the Branson Ferris Wheel, located along Highway 76 at The Track Family Fun Park. (Nathan Papes/The Springfield News-Leader via AP)

O'FALLON, Mo. (AP) — A swath of southern Missouri is seeing a big rise in coronavirus cases and hospitalizations at just the wrong time — as tourists eager to get out after being cooped up for a year make their way to popular destinations such as Branson and Lake of the Ozarks.

Data from the state health department's COVID-19 dashboard on Wednesday showed 206 people hospitalized with the virus in southwestern Missouri — nearly double the 111 hospitalizations from that region at the start of May. The number of people in intensive care units in the region has tripled — from 22 a month-and-a-half ago to 65 now. Meanwhile, statewide hospitalizations have remained steady since March.

“We think that with the Delta variant here, those that aren’t vaccinated are just sitting ducks," said Steve Edwards, CEO of CoxHealth, which operates several hospitals in the region.

Memorial Day marked the unofficial beginning of the tourism season, and big crowds are gathering again at Branson's popular shows and attractions, and at the beaches, resorts and entertainment areas around the Lake of the Ozarks.

Jason Outman, CEO of the Branson Lakes Area Chamber of Commerce and Convention & Visitors Bureau, said Branson set a record with 9.1 million visitors in 2019. That number dropped to 6.3 million last year amid the pandemic, and tourism tax revenue fell 30%.

The rebound has been huge. So far in 2021, Branson is on pace to top 2019 attendance and tax revenue, Outman said. He doesn’t believe the uptick in coronavirus cases will do anything to dampen the resurgence.

“We’re seeing individuals that are just ready to come and have fun and experience what Branson has to offer,” Outman said.

Lisa Rau at the Branson area amusement park Silver Dollar City agreed. She said visitors are enthusiastic even though the park continues with precautions, which include frequent disinfecting, crowd limits and asking the unvaccinated to wear masks.

But health leaders are worried about the emerging presence of the Delta variant in southern Missouri. The variant was first detected in India and is a more transmissible version of the disease. It currently makes up 6% of all cases in the U.S.

The variant is also believed to be responsible for a surge in northern Missouri. CDC data shows that some of the counties with the highest per capita increases in the nation are in the state's sparsely populated northern tier.

While those counties have higher per capita cases, southern Missouri counties are seeing big jumps in actual cases.

New cases also are rising in counties along the Lake of the Ozarks, including Camden and Miller counties. The lake region drew national attention during the Memorial Day weekend of 2020 when hundreds of people gathered at bars and swimming area as the coronavirus was spreading across the U.S.

New restrictions are unlikely. Political leaders, business operators and residents in Branson and the Lake of the Ozarks region were overwhelmingly opposed to mask mandates and other measures last year, even at the height of the pandemic.

Edwards said he fears the surge will worsen. The CoxHealth hospitals in southwestern Missouri have seen the number of patients triple to just under 60 since late May.

“We have worries,” he said. “I hope we don’t hit our high water marks from this winter where we had as many as 170 COVID-positive patients in-house. But I don’t think we’ve hit our peak this summer yet, either.”