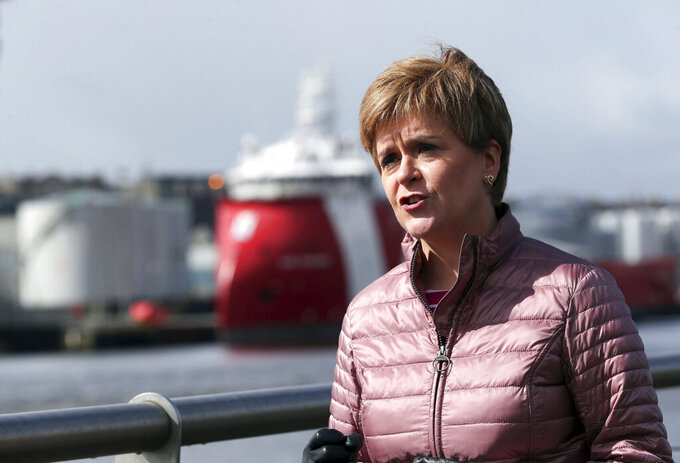 First Minister of Scotland and leader of the SNP Nicola Sturgeon, visits Pocra Quay during campaigning for the Scottish Parliamentary election, in Aberdeen, Scotland, Wednesday, May 5, 2021. Scotland holds an election Thursday that could hasten the breakup of the United Kingdom. The pro-independence Scottish National Party is leading in the polls and a big victory will give it the the moral right and the political momentum to hold a referendum on whether Scotland should end its three-century union with England. First Minister Nicola Sturgeon has downplayed independence in her campaign, stressing her credentials as a safe pair of hands to lead Scotland’s recovery from the pandemic. (Russell Cheyne/PA via AP)

EYEMOUTH, Scotland (AP) — James Cook was an enthusiastic supporter of Scottish independence, but now he’s not so sure.

As Scotland holds an election Thursday that could be a stepping stone to the breakup of the United Kingdom, the seafood wholesaler has more urgent things on his mind. Britain’s exit from the European Union and the coronavirus pandemic have caused economic upheaval, and he says it’s not the right time to gamble on independence.

“A third major event could be cataclysmic for us,” Cook said.

The question of independence overshadows the election for the 129-seat Scottish Parliament. The Scottish National Party, which has led a minority government since 2016, says a big victory will give it the moral right and the political momentum to hold a referendum on whether Scotland should end its three-century union with England.

Scotland voted to remain part of the U.K. in a 2014 independence referendum that was billed at the time as a once-in-a-generation decision. But SNP leader Nicola Sturgeon argues that Brexit has fundamentally changed the situation by dragging Scotland out of the European Union against its will. The U.K. as a whole voted narrowly in 2016 to leave the bloc, but a majority of Scottish voters wanted to remain in the EU.

Sturgeon says that if she wins a majority on Thursday, she will have the authority to pass legislation through the Scottish Parliament for a new independence referendum, forcing British Prime Minister Boris Johnson to challenge the law in court if he wants to stop it.

Johnson opposes a new vote, insisting Wednesday that “this is not the time to have a reckless, and I think irresponsible, second referendum.”

Elections are also being held Thursday for the Welsh Assembly, London mayor and local authorities across England, in the biggest test of Britain’s political temperature since Johnson’s Conservatives won a general election in 2019.

Polls suggest it’s almost certain the SNP will win the most seats in Scotland's semi-autonomous parliament, but may not secure an overall majority.

For some voters, independence has been supplanted by more urgent concerns — not least COVID-19, which has cost thousands of jobs and caused more than 7,600 deaths in this country of 5.5 million people.

Brexit has also prompted some to reconsider. Fractious, years-long divorce negotiations between the U.K. and the much larger EU proved harder than British Brexit-backers had promised — a foretaste of how a future U.K.-Scotland split could unfold. New post-Brexit barriers to trade with Europe have hammered Scottish business including fish and seafood exporters, who say checks and red tape have left Europe-bound catches rotting in trucks.

“Businesses are really on the back foot at the moment,” said Cook, who runs seafood seller D.R. Collin & Son in the port of Eyemouth, near the Scottish-English border. “So I think if you speak to anybody that is business-orientated, they will be a bit cautious.”

Cook said he still supports independence in the long term, but there are “a lot of issues we need clarity on” first.

Sturgeon has downplayed independence in her campaign, stressing her credentials as a safe pair of hands to lead Scotland’s recovery from the pandemic.

“I am the only candidate for first minister offering tried and tested leadership to guide us through the crisis and into recovery,” Sturgeon said in an open letter to Scottish voters, which didn't mention independence.

Sturgeon, who has led Scotland since 2014, has seen her reputation enhanced by her response to COVID-19. Her calm, crisp style contrasts with the erratic messaging and frequent policy shifts of Johnson, whose brand of posh, polysyllabic Englishness grates on many Scots.

Her popularity has left Scotland’s two big pro-Union parties, the Conservatives and Labour, fighting over second place. Both parties have seen their poll ratings plunge in recent years. But both are hoping for a comeback under new leaders, Anas Sarwar for Labour and Douglas Ross for the Conservatives.

On Sturgeon’s other flank is the uncompromisingly pro-independence former SNP leader Alex Salmond. He and Sturgeon are former friends and political allies who fell out over misconduct allegations against Salmond, who was tried and acquitted last year on sexual assault charges.

Salmond says the allegations were part of a witch-hunt by his political opponents, and attacked the Scottish government, and Sturgeon, over how they were handled.

In March, Salmond announced he was forming a new pro-independence party, Alba — the Scottish Gaelic word for Scotland. Alba is not running against the SNP in Scotland’s 73 parliamentary constituencies but is fielding candidates in the regional contest used to elect the other 56 lawmakers. Salmond says Alba seats will help form a pro-independence “super majority” in the Scottish Parliament.

Salmond is a huge figure in Scottish politics who as first minister secured the first independence referendum in 2014. But his attempts to stay in the limelight — which include hosting a talk show on the Kremlin-funded TV channel RT — and the sex abuse allegations have tarnished him.

Polls suggest voters have limited appetite for Alba’s chest-thumping style of Scottish nationalism and are more in tune with Sturgeon’s take-it-slowly approach.

“I completely understand the emotional pull of independence,” said undecided voter Olive Burnside, a retired English teacher in Glasgow. “And also I would love to be free of the bunch of idiots — well, corrupt people — that we have in (the U.K. government in) Westminster at the moment.

“So my heart says, ‘Oh yes it would be great.’ But my head just does wonder about the economic side of things, about managing such a small country.”

Mark Diffley, a political pollster in Edinburgh, said “there is very little support, including amongst independence supporters” for a referendum soon.

“The economic prospectus for independence is now not really worth the paper it’s written on, because COVID has just put an earthquake in the middle of any economic forecasts,” he said.

“It will suit everyone, I think, to let this settle — let the dust settle on the election, let the focus be on the economic and social recovery from the pandemic and address the independence question a bit later.”