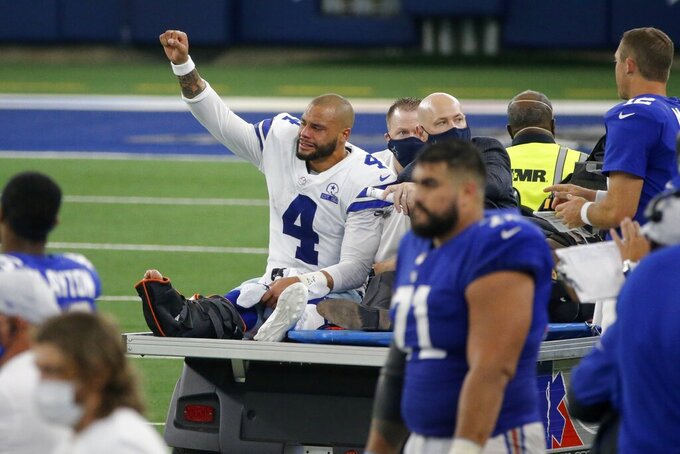 FILE - In this Oct. 11, 2020, file phot, Dallas Cowboys quarterback Dak Prescott (4) lifts his fist to cheers from fans as he is carted off the field after suffering an injury while running the ball during the second half of the team's NFL football game against the New York Giants in Arlington, Texas. The Cowboys are on the verge of a lost year, when they had hoped to contend, after a broken ankle ended the quarterback's season. (AP Photo/Michael Ainsworth, File)

ARLINGTON, Texas (AP) — The open week must be feeling a lot like the offseason for first-year Dallas Cowboys coach Mike McCarthy: virtual meetings, with the players instructed to stay away from the facility for COVID-19 reasons.

The pandemic disrupted McCarthy's plan for getting his program going, and injuries derailed the season once it started, most notably the broken ankle that sidelined star quarterback Dak Prescott for the year.

Even though McCarthy's Dallas debut is all but wrecked just nine games in, owner Jerry Jones and his son, chief operating officer Stephen Jones, believe they picked the right replacement for Jason Garrett, who was in charge for nearly a decade.

“Absolutely. Unequivocal,” Stephen Jones said when asked if McCarthy would return in 2021 regardless of the finish to a so-far dismal 2-7 season.

“I’ve got my man and I’ve got the way to handle through these tough times,” Jerry Jones said on his radio show recently.

The Cowboys had to stay away from headquarters during their open week because a positive COVID-19 test for Pittsburgh tight end Vance McDonald turned up a day after he played 24 snaps in the Steelers' 24-19 victory over Dallas.

Assuming there isn't an outbreak among Dallas players, they should be back to in-person work Monday before returning Nov. 22 at Minnesota.

Dallas hopes backup QB Andy Dalton is back by then. He made two starts in Prescott's place before getting a concussion against Washington, then went on the COVID-19 list about the time he was expected to clear concussion protocols.

As a result, the the Cowboys have had four starting quarterbacks in a span of five weeks after already having lost their tight end (Blake Jarwin, knee) and both tackles (Tyron Smith, neck; La'el Collins, hip) to season-ending injuries.

“We still have to line up and play like everybody else and we’re getting better as a football team,” McCarthy said. “But it’s like anything in life, you don’t really appreciate it as much until you don’t have it. Not having the offseason program, and things like that, it’s been challenging.”

The defense under new coordinator Mike Nolan was abysmal early, repeatedly blowing assignments while giving up the most points through five games in franchise history. The unit is still on a record pace for futility, but has improved.

It's eerily similar to 2005, the last time McCarthy and Nolan were on the same staff. Nolan was coach in San Francisco, McCarthy the offensive coordinator. The 49ers finished 4-12 with four starting QBs and a terrible defense.

Stephen Jones looks elsewhere for comparisons — to 2006, McCarthy's debut as a head coach in Green Bay. The Packers started 1-4 and were 4-8 before winning their last four games. Green Bay made the playoffs nine of the next 10 seasons and won a Super Bowl.

“The way we’ve played, especially the first seven games on the defensive side of the ball, it was frustrating for everybody, I think, to watch how we played there,” Stephen Jones said. “But I do think we’re coming around. You’ve got to take a deep breath on these things.”

Jerry Jones hasn't been available to reporters all season because of the pandemic; he normally answers questions after every game.

The outspoken billionaire has had some testy moments with the hosts of his two weekly radio appearances, mostly over questions about whether the players are buying in and whether McCarthy has already lost the locker room.

“We wanted someone that in case the you-know-what hit the fan, that had the credibility and the doability to ... stand tall and strong as the head coach,” Jerry Jones said. “And he’s doing that. He’s doing that in the face of adversity.”

The Cowboys stuck with Garrett longer than their fans wanted, believing he could end what is now a 25-year stretch without the storied franchise even making the NFC championship game. Last year's 3-0 start fueled already high expectations, and when Dallas faded and missed the playoffs, the Joneses sought a new voice for the first time since 2010.

“You’re changing a culture,” Stephen Jones said. “We like stability. That’s why we stayed with Jason for 10 years, and we know these things don’t happen overnight in terms of when you turn things around.”

If Dalton returns and stays healthy, the Cowboys could finally have some stability at quarterback without Prescott. Now the trick is winning a game without the 2016 NFL Offensive Rookie of Year. Dallas is 0-4 so far.

Two-time rushing champion Ezekiel Elliott is without a 100-yard game this deep into a season for the first time, and what was the NFL's No. 1 offense with Prescott is far from it without him. But the defense seems to be figuring out Nolan's plan.

If nothing else, McCarthy goes forward figuring he won't be one-and-done in Dallas, which has a front office believing the NFC East is still in play because every team currently has a losing record. Philadelphia (3-4-1) leads the division.

“I think anytime you have confidence around you, it’s important to your program and what you’re trying to build,” McCarthy said of Stephen Jones' vote of confidence. “But I’m focused on improving each and every week and try to get done what we still are capable of getting done this year.”