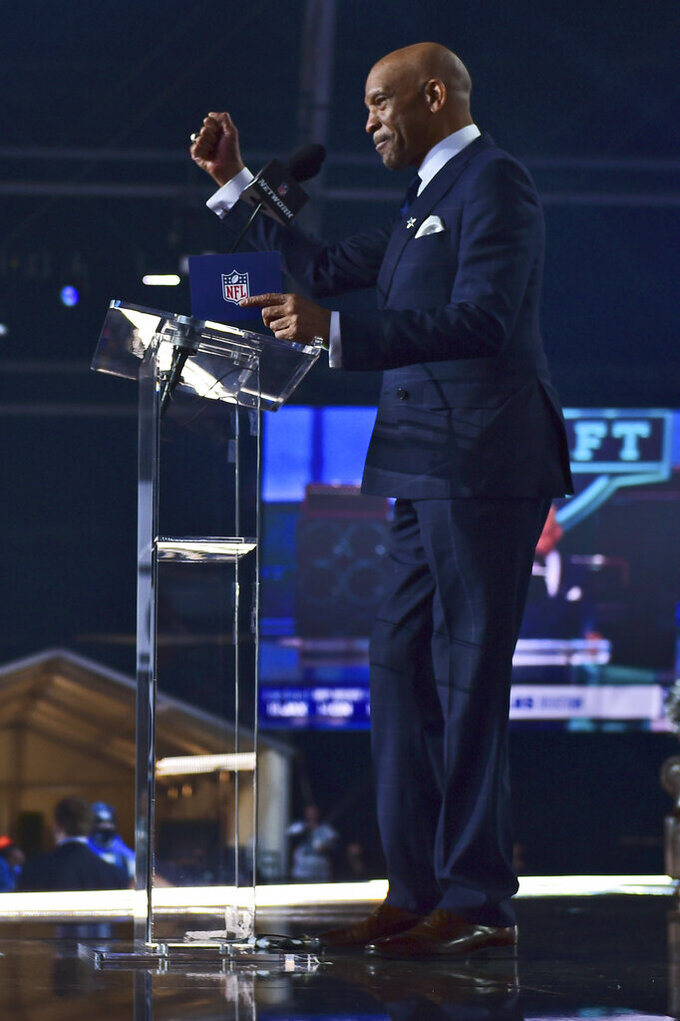 FRISCO, Texas (AP) — The Dallas Cowboys focused on defense like never before in the NFL draft under Jerry Jones.

The Cowboys used their first five picks on defensive players, four of them coming on a busy Friday night.

Dallas had never gone that far into the draft without picking an offensive player since Jones bought the team and made himself the general manager in 1989. The Cowboys gave up a franchise-worst 473 points last year while going 6-10 in coach Mike McCarthy's debut.

“Unfortunately, we didn’t need to send any message,” Jones said. “It was pretty well known where we might need to be doing some addressing. It wasn’t designed to send any interpretation of how we felt about things.”

With the Cowboys now at 25 years and counting without even reaching the NFC championship game, much less a Super Bowl for a proud franchise with five championships, the message seemed clear enough to Wright.

“That we’re going to bring some more life, more turnovers,” Wright said. “And definitely we’ll get a sixth championship.”

The selection used on Golston came from Philadelphia in a trade in the first round on opening night, when the Cowboys dropped two spots to No. 12 and took Penn State linebacker Micah Parsons.

It was the first time Dallas took five defensive players to start a draft since 1982. The Cowboys had started with four defensive picks only one other time under Jones, in 2012.

Dallas believes it has the pieces on offense, having just signed quarterback Dak Prescott to a $160 million, four-year contract.

Ezekiel Elliott is a two-time rushing champion, and the Cowboys are a year removed from waiting until the second round on defense after receiver CeeDee Lamb unexpectedly fell to them at No. 17 despite the presence of another $100 million player at that position in Amari Cooper.

“It was obviously very much an emphasis of improving on the defensive side of the ball,” executive vice president of personnel Stephen Jones said. “I think it was probably a little long overdue that the board fall right and we were able to pick the defensive guys.”

Cornerback is arguably the greatest need on a unit full of them.

Dallas lost Chidobe Awuzie, a 2017 second-round pick, to Cincinnati in free agency this year after 2015 first-round pick Byron Jones signed an expensive contract with Miami in 2020.

After losing Jones, the Cowboys drafted Trevon Diggs out of Alabama in the second round last year. Diggs started 11 of 12 games as a rookie, missing four because of a broken foot, and led Dallas with three interceptions.

Joseph will have a chance to start alongside Diggs, although holdovers Anthony Brown and Jourdan Lewis will see playing time as well. Brown has been a starter for the Cowboys, and Lewis has played in the slot and outside.

Joseph tied for third in the Southeastern Conference and was 14th nationally with three interceptions, including one returned for a touchdown in Kentucky's 34-7 victory over Tennessee.

“I feel like we're fixing to do a lot of damage,” Joseph said when asked about Diggs. “We're both physical against tall receivers, and we're smart. We’re playmakers so we’re just going to put our techniques together and learn from each other.”

LSU suspended Joseph for the bowl game during the 2018 season for a violation of team rules. He transferred to Kentucky, sat out 2019 and played the first nine games last year for the Wildcats before opting out of the final two games of the coronavirus-altered season.

“I transferred from LSU for more exposure and stuff like that while accepting my consequences," Joseph said. “As far as me sitting out the game, I was apologizing to my teammates for not being there for them. Just having to learn everything and not do it again.”

While Odighizuwa is listed as a defensive tackle, his size is more in line with NFL defensive ends at 6-foot-2, 280 pounds. He could end up playing inside and outside under new defensive coordinator Dan Quinn.

Like Odighizuwa, Golston played all four college seasons. He tied for the Iowa team lead in sacks with 5½ and intercepted a pass. Golston finished his career with 12 sacks.

Wright led Oregon State with three interceptions in 2019 and tied for the team lead in two in six games last year.