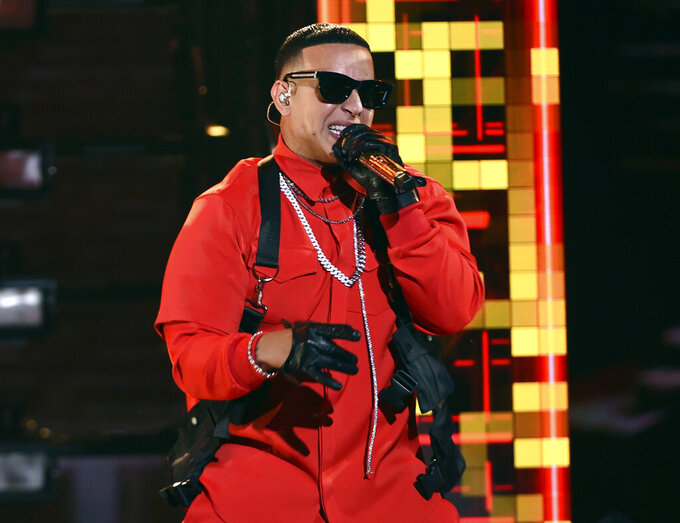 FILE - Daddy Yankee performs at the Latin American Music Awards in Los Angeles on Oct. 17, 2019. On Friday, Dec. 6, Daddy Yankee is releasing the first of three parts of “DY2K20,” a digital version of his 12 sold-out concert series “Con Calma Pal’ Choli." The show will air for free, in three parts, on his YouTube channel. (Photo by Chris Pizzello/Invision/AP, File)

NEW YORK (AP) — A year after a series of concerts in Puerto Rico that ended up being his last because of the pandemic, Daddy Yankee is bringing those performances to YouTube as a Christmas gift to his fans around the globe.

“DY2K20,” the digital version of his show “Con Calma Pal’ Choli,” will be released in three parts on Yankee's YouTube channel, with the first installment out Friday. The others will drop on Dec. 14 and Dec. 21, respectively.

“I wanted to give a Christmas present to all my fans during the pandemic, bring the party to their homes free of charge, bring them joy in such difficult times,” the reggaeton star told The Associated Press in a phone interview from Miami.

Yankee, who has stayed mostly out of the spotlight in 2020, said that while the pandemic has hit many very hard, it has also allowed him to do something he hadn't done in three decades: Focus on his health and rest.

It's something he had to gradually learn after gaining 40 pounds (almost 20 kilos) during the first months of quarantine.

“Maybe because of the anxiety... I started eating and eating and eating and I put on the pounds like never before. I got to weigh 230 pounds (105 kilos) ... But I recovered my normal weight from 10 years ago. That was my focus,” said the “Despacito” and “Gasolina” singer, adding he achieved his goal by watching what he ate and exercising, a lot.

“I devoted myself to my health and to something that was unknown to me, which was rest,” he said. “I started to learn how to live with calmness and to appreciate it... And I feel different, I feel in a new phase completely.”

Now that he gained some balance in his life, he feels ready to reactivate his career. In addition to “DY2K20,” he has another surprise for his fans: A new music collaboration he will release in the coming days, although he wouldn't provide details yet.

For now, he said he was blessed to finally share with the world the footage of a show staged at the Coliseo de Puerto Rico José Miguel Agrelot, which involved over 80 people who worked with “great passion, great creativity.” It was well-received, going from two scheduled dates to a full residence, with 12 sold-out shows, or 170,000 tickets.

What many don't know is that a technical problem on opening night resulted in a new business opportunity: Massive concerts in the daylight hours, something never seen before on the island.

After getting stuck on a platform over the stage, Yankee announced to the audience that he would give them an extra show for free, and it was a matinee. He adjusted the content to make it family friendly, and ended up doing one more that way.

Another unique aspect of “Con Calma Pal’ Choli,” which featured artists like Ozuna, Wisin & Yandel and Nicky Jam, was the use of holograms to replace those who weren't there to perform live.

“I wanted the artists to be gigantic, on people's faces, so the audience could feel that they were in front of them and we achieved that,” Yankee said. “It was a concert that became a residence, like if Las Vegas had moved to Puerto Rico.”