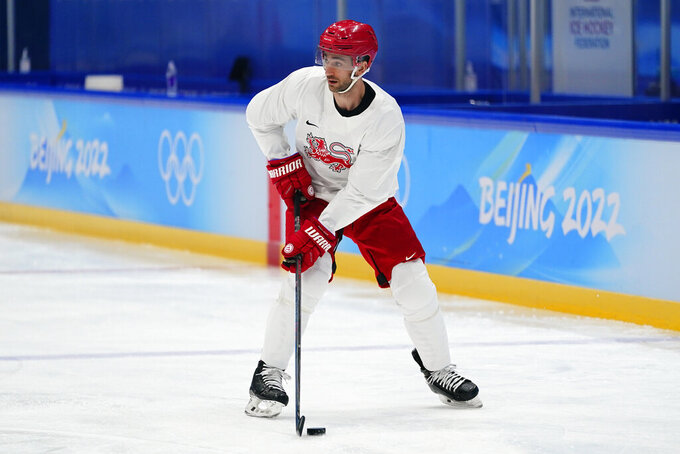 BEIJING (AP) — Frans Nielsen played in almost 1,000 NHL games and knew this would be his final season playing hockey.

It was now or never for Denmark to reach the Olympics.

Nielsen and his teammates finally got over the last stumbling block to win their qualifying tournament last summer, and the women’s team followed suit shortly after. The Danes are at the Olympics in hockey for first time in the nation’s history, and doing so with two teams is even more of a delight for those involved, the program and fans back home.

“I’ve been chasing this my whole life,” Nielsen said. “We finally made it.”

The women’s team debuted in 1987, but an entire generation missed out on elite competition because Denmark was out of the IIHF's top division from 1992-2019. Players who have been around for several years and unsuccessful attempts to climb the ladder have gone through more downs than ups to get to this point.

“We’re really involved in a long one, like, it’s not a sprint — it’s like a marathon,” said winger Emma Russell, who first played for Denmark in 2012. “It had tears and blood and sweat.”

Even as Nielsen became the first Dane to play in the NHL in 2007 and more followed, the Olympics remained a dream that was several upset victories away from being realized.

“They have been right there a bunch of times, and we just couldn’t get over that hump,” said Washington Capitals center Lars Eller, who trails only Nielsen in the career scoring race among Danish players. “It’s a big deal for Denmark to be there. It’s a big step just for the sport and sports in general in our country, so it’s a big milestone.”

It’s still significant on the men’s side even though Eller and the rest of the NHL are not able to participate. It helps to have the women’s team as part of the delegation, which would comprise only 14 athletes if not for hockey.

“Denmark is not a big winter sport country at all,” Nielsen said. “It means a lot we can bring two hockey teams. It really brings the numbers up for the country, and it’s going to look a little bit better on the opening ceremony.”

Before marching in that ceremony, the women open play against host China on Friday. It's the realization of a dream that was dashed close to the finish line before the Sochi Olympics and not close to happening for the Pyeongchang Games because of three consecutive losses in qualifying.

Players hope it’s just the start of developing youth hockey in their soccer-crazed country of 5.9 million that has just 1,918 junior and 702 women’s players registered and 27 indoor rinks.

“They’re doing a lot at the Danish Federation at home to promote the game, both boys and girls having different activities at home with the Olympics, with the rings, with everything, showing our games, all these things,” captain Josefine Jakobsen said. “I’m sure it’s going to help develop both on the girls’ side and the boys’ side.”

An improbable run by either the men or women could do wonders for Danish hockey, but the expectations are not high, even after Germany's men's team got to the Olympic final four years ago.

“As Denmark, I don’t think we can come in here and expect to win gold,” Nielsen said. “You never know. One day at a time, one game at a time and then hopefully we can go out there and surprise everyone.”

Just getting to the Olympics was a national accomplishment. It was so important to make it on the men’s side that some of Denmark’s best, including Nikolaj Ehlers of the Winnipeg Jets and Oliver Bjorkstrand from the Columbus Blue Jackets, joined the team for the qualification tournament in August. They’re now unable to play because the NHL season is ongoing.

“They really wanted this this time,” said coach Heinz Ehlers, who is Nikolaj’s father. His son would not have been able to play in the Olympics this time anyway because he’s injured.

Bjorkstrand, Eller and Carolina All-Star goaltender Frederik Andersen won’t get that chance either because the NHL withdrew. Nielsen said he feels bad for his countrymen but figures they’re young enough to go in 2026.

The 37-year-old Nielsen knew this was his final opportunity and laughed knowing he wouldn’t be playing for Denmark in Beijing if he were still in the NHL.

“It all worked out for the best,” he said.