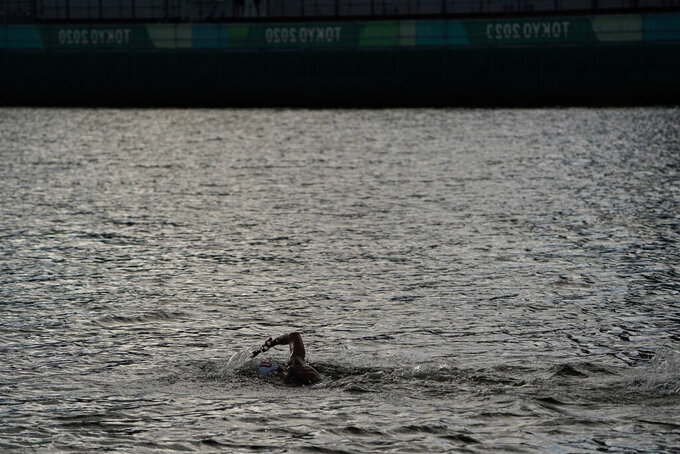 TOKYO (AP) — Coming into the Olympics, Alice Dearing made a huge impact in the debate over ways to make swimming a more diverse sport.

She had hoped to further her efforts with a strong performance in Tokyo Bay, but it wasn’t to be.

The first Black female swimmer to make the British team struggled to a 19th-place finish in the 10-kilometer marathon swimming event Wednesday morning.

The blistering pace by the world’s best open water swimmers caught Dearing off guard, leaving her more than 5 1/2 minutes behind winner Ana Marcela Cunha of Brazil and in tears when it was over.

“I have a lot more to give than that,” the 24-year-old said, having beaten only six swimmers in the field.

Dearing has already given a lot to the sport by claiming a historic place on the British team and throwing her support behind the “Soul Cap,” an oversized head covering designed for natural Black hair.

World governing body FINA rejected an application to have the Soul Cap approved for the Tokyo Games, but has said it will consider changing that position after further study.

“I just want people to know that no matter your race or background, if you don't know how to swim, get in and learn to swim,” Dearing said. “Don't let anyone tell you it's not for you.”

Despite efforts to increase diversity, swimming remains a largely white sport. The issue has taken on particular importance in the United States, the world's foremost swimming powerhouse, since protests broke out around the country last summer over the death of George Floyd and other acts of police brutality.

A group of current and former Black swimmers, including gold medalists Cullen Jones and Simone Manuel, have joined with USA Swimming to form Team BLAC, the Black Leadership in Aquatics Coalition.

The group wants to continue efforts to ensure more people of color learn to swim but, more important, provide support to Black swimmers moving up through the ranks, to make sure they don't feel like outsiders.

The debate over the Soul Cap only heightened the importance of ensuring that everything from the rulebook to grassroots efforts are mindful of those beyond swimming's traditional base.

Many thought FINA was out of touch when one of the reasons it gave for barring the Soul Cap was because the rubberized covering didn't follow "the natural form of the head.”

Tell that to Dearing, who wanted to wear the oversized cap to cover her curly and voluminous hair.

“It's a shame about what happened, but I think the right steps are being made by FINA and the Soul Cap,” Dearing said. “I'm very optimistic that it will be a better news story the next time.”