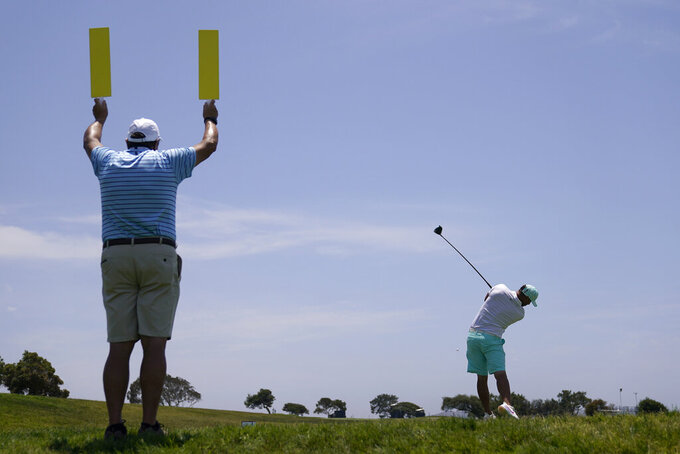 Brooks Koepka plays his shot from the second tee during a practice round of the U.S. Open Golf Championship, Tuesday, June 15, 2021, at Torrey Pines Golf Course in San Diego. (AP Photo/Jae C. Hong)

SAN DIEGO (AP) — Torrey Pines has had its share of conflict over the years involving some of the top players in golf. Just not during such a taxing major as the U.S. Open.

Think back to 2003 at the Buick Invitational when Phil Mickelson was quoted in a magazine interview as saying Tiger Woods played with inferior equipment and was the only player good enough to overcome “the equipment he's stuck with.”

They wound up in the final group with Brad Faxon, whose nickname that week was “Switzerland,” and Woods got the final word with another victory at Torrey Pines.

Then there was Jordan Spieth and Patrick Reed. They had a falling out from the 2018 Ryder Cup in France when Reed blamed Spieth for them not playing together in a U.S. loss. They played together in the third round of the Farmers Insurance Open, and Spieth broke any tension by giving Reed a playful hug on the first tee.

Can anyone see Bryson DeChambeau and Brooks Koepka hugging it out this week?

“At this point, probably not,” Spieth said with a grin.

But this social media spat is different from the other two that played out at Torrey Pines, getting so much attention that it has become the primary point of interest at this U.S. Open.

No, they're not playing together.

DeChambeau and Koepka are on opposite sides of the draw and starting at opposite ends of the course. There's a chance they might not even see each other this week, though they were hard to miss. Koepka wore lime green shorts. DeChambeau practiced in a bright red shirt and changed to a navy shirt for his interview so one of his sponsor logos was more visible.

Koepka left little to the imagination when talking about their relationship.

“I don't know if I'd call it a conflict,” Koepka said. “We don't like each other. There's plenty of people you guys don't like. I don't see any difference.”

This goes back nearly two years, and it reached a new level at the PGA Championship when a leaked Golf Channel interview that was never aired made its way onto Twitter. Koepka stopped the interview when he noticed DeChambeau walking behind him, rolled his eyes and used salty language to share his feelings about DeChambeau.

It was viewed more than 10 million times before the video was taken down.

So began the back-and-forth. DeChambeau was bothered by fans shouting “Brooksy” to him at the Memorial (Koepka didn't play that week). Koepka posted a video offering free beer from one of his sponsors to any fans who might have have been ejected.

The U.S. Open starts Thursday, and both players will have enough concerns coping with a South Course with dense, punishing rough that looks to fit the bill as the toughest test in golf.

“It doesn’t matter to me what goes on,” Koepka said. “It makes no difference to me. I’m out there trying to play my own game. What happens inside the ropes, it won’t bother me.”

DeChambeau described it as “great banter."

“I hope on the weekend we can play against each other and compete,” DeChambeau said. “I think it would be fun and would be great for the game.”

Faxon got in the middle of this one, too.

He said on SiriusXM that he found out the USGA called DeChambeau and his agent to ask if it would be OK to put them in the same group, and that DeChambeau declined. That led to strong denials by DeChambeau's agent and the USGA that such a call existed.

However, it fell in line with a player saying two weeks ago that DeChambeau told him the USGA called to inquire about putting them together and DeChambeau was opposed because it would take away from the U.S. Open.

The player spoke on condition of anonymity to The Associated Press because of the sensitivity of the subject.

Gary Woodland heard speculation about a group of the last three U.S. Open champions — Koepka in 2018, Woodland in 2019 and DeChambeau last year. He would have been all for it.

“I think the energy in that group would have been amazing. I would have instigated and tried to start fights or whatever I could have done," he said with a smile.

For an individual sport with so many personalities, it should not be surprising that not everyone gets along. In golf, though, it's rarely this public.

“I think they’ve got a rivalry now, and I think it’s good for the game in the sense of rivals,” Webb Simpson said. “I think them kind of being open and honest is good in a way because we know kind of what they think.”

Simpson even wondered if they were doing this on purpose to improve their reach with fans, tapping into a $40 million bonus pool based on player engagement.

“It would be fun to see them duel it out in a tournament here coming up, head-to-head on Sunday,” he said.

Most other players have more pressing concerns, starting with how to keep the ball in the fairway and on the green to avoid the rough.

Spieth stepped awkwardly on his right ankle last week and has been dealing with soreness, hopeful that daily improvements will have him at full strength by Thursday.

Jon Rahm was in the process of being vaccinated when he tested positive for the coronavirus after building a six-shot lead through 54 holes of the Memorial. Two negative tests ended his quarantine a few days early, though he still feels a little behind from having to go a week without any practice.

The fact DeChambeau is the defending champion has been almost an afterthought.

He won at Winged Foot by relying on his length off the tee and his strength out of the rough, along with iron play and putting that didn't get enough credit. He won by six and believes the same strategy might work at Torrey Pines.

In his tiff with Koepka, winning might be the final word.

This U.S. Open has so many possibilities, all of them overshadowed by a public feud in which the leading characters have suggested it's good for the game because people are talking.

While it's entertaining, NBC analyst Paul Azinger might have summed it up best.

“Sometimes I think they don't realize we might be laughing at them, not just with them," he said.