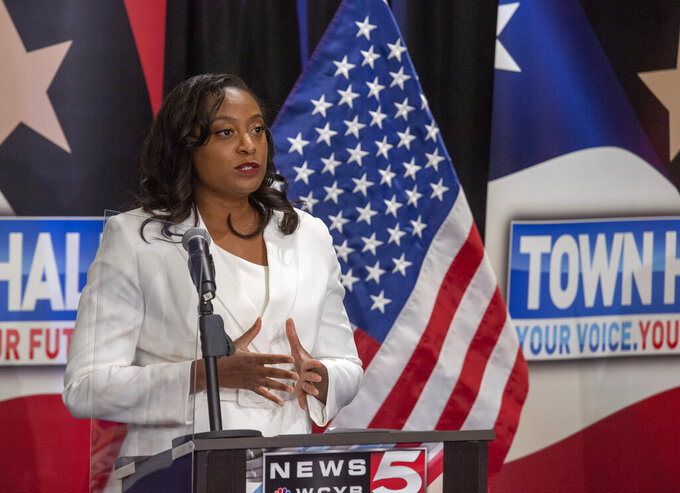 Democratic candidate for Governor of Virginia Del. Jennifer Carroll Foy answers a question during a debate held in Bristol, Va., on Thursday, May 6, 2021. (David Crigger/Bristol Herald Courier via AP) 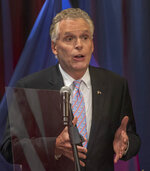 RICHMOND, Va. (AP) — Several Democratic candidates for Virginia governor turned attention to the general election in a debate Thursday, seeking to portray themselves as best positioned to take on Republican nominee Glenn Youngkin.

Thursday's debate, conducted virtually, was the third of four planned and the first since Republicans picked their statewide candidates in a May 8 unassembled convention.

Terry McAuliffe, who preceded Ralph Northam in the governor's mansion and who is widely seen as the Democratic frontrunner thanks to his name recognition, fundraising and extensive endorsements, went straight for Youngkin in his opening statement. He called the former co-CEO of the Carlyle Group “an extreme right-wing billionaire."

“We cannot let Glenn Youngkin do to Virginia what Donald Trump did to our country," McAuliffe said.

Former Del. Jennifer Carroll Foy, an attorney and former public defender, drew notice to attacks the Republican Governors Association has lobbed her way, saying they are “worried and they should be.”

“I flipped a Republican district, while pregnant with twins and being outspent and out-endorsed. But I will never be outworked," she said.

Veteran State Sen. Jennifer McClellan made the pitch that she has both the fresh perspective, in a nation that's never had a Black woman governor, and deep policy experience needed to take on Youngkin.

“I came to the General Assembly as a 32-year-old Black woman from the most Democratic district in the state, operating in a body that was mostly white Republican men over 50. And yet I’ve been able to pass over 300 bills," she said.

In a statement, Youngkin said his campaign was seeing an “outpouring of support across Virginia” and across party lines.

He took aim specifically at McAuliffe, saying: “It was abundantly clear tonight that Terry McAuliffe is just another all-talk, no-action career politician desperately clinging to power.”

The hourlong event was pre-taped in the morning and moderated by NBC News political director Chuck Todd. It was organized in the style of a forum, with no candidate-to-candidate conversation.

Del. Lee Carter, a self-described socialist who touted that he's as likely to criticize his own party as Republicans, appeared from a bedroom, which did not go unnoticed on Twitter.

“Here come all the consultants attacking me because my whole apartment is smaller than Terry McAuliffe’s stately sitting room," he tweeted in response. "We need a governor who knows what it’s like to live paycheck to paycheck.”

When Todd asked Carter about whether nominating a socialist would be a liability for Democrats, Carter quipped that it didn't matter “because they're going to call you that anyway, Chuck.”

Lt. Gov. Justin Fairfax didn’t directly invoke Youngkin and focused on his record. He touted his tie-breaking votes on Medicaid expansion and marijuana legalization and said he'd worked in office on “the issues that go to the heart of whether or not people are safe, secure, and have the opportunity to achieve the American dream.”

Fairfax is campaigning while facing two allegations of sexual assault he strenuously denies. Yet his team admits they have affected his candidacy.

Some of the event's questions dealt with how Virginia can recover from the COVID-19 pandemic.

Later, a spokesman contradicted that, saying McAuliffe's position was that businesses should be allowed to request proof of vaccination for crowded indoor events like concerts but he does not favor a mandate.

The idea of so-called “ vaccine passports " has proven controversial and some Republican governors have issued orders barring businesses or state agencies from asking people to show proof of vaccination. Supporters say they could make reopenings faster and easier.

McAuliffe was the first chosen to respond. The other candidates did not offer a response about vaccination cards and were not pressed on the topic.

On the topic of paid sick leave, an issue where Democrats currently in full control of state government have struggled to find consensus, the candidates broadly agreed that the benefit should be available to workers who need it.

McClellan and Fairfax both said the state should consider subsidies of some kind to ensure small businesses could provide sick leave and still compete.

McAuliffe, who spent much time in office battling for Medicaid expansion with Republicans who then controlled the General Assembly, used his answer to highlight that Youngkin has criticized the eventual expansion, which happened during Northam's administration.

Carter, who supports universal health care, said the other candidates' answers showed their willingness to keep the current health care system in place.

The candidates also were asked whether they support President Joe Biden’s proposal to raise taxes for those making more than $400,000.

Four clearly said yes. McClellan did not give a yes or no answer but said she would support reforms to make Virginia’s tax code less regressive.

Only Virginia and New Jersey are holding governor's elections this year. The off-year elections typically draw national attention as a bellwether for which party might have an advantage in the national midterm elections.

The primary is June 8.