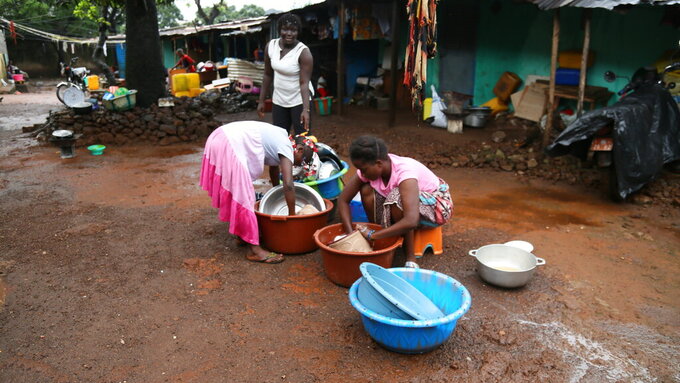 Women wash clothes at the house of Guinean wrestler Fatoumata Yarie Camara in Conakry, Guinea, Tuesday, July 20, 2021. A West African wrestler's dream of competing in the Olympics has come down to a plane ticket. Fatoumata Yarie Camara is the only Guinean athlete to qualify for these Games. She was ready for Tokyo, but confusion over travel reigned for weeks. The 25-year-old and her family can't afford it. Guinean officials promised a ticket, but at the last minute announced a withdrawal from the Olympics over COVID-19 concerns. Under international pressure, Guinea reversed its decision. (AP Photo/Youssouf Bah) 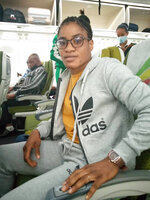 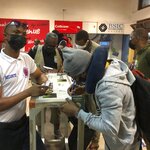 CONAKRY, Guinea (AP) — Fatoumata Yarie Camara is used to being thrown to the ground and getting up again, getting back into the fight. She's dedicated her life to wrestling, a sport that breeds tenacity. On the mat, she qualified for the Tokyo Olympics, the only athlete from Guinea to do so. Off the mat, she has battled the beliefs of her culture and family that women don’t belong in sports.

Camara endured delays as the pandemic threatened the Games. Then, three days before the rescheduled opening ceremony, her dream of standing alongside the world’s best athletes teetered on a plane ticket — one she couldn’t afford and government officials hadn’t given her. Saying they wanted to keep Guinea’s athletes safe from COVID-19, the West African country withdrew from the Olympics entirely.

Camara and others were skeptical of officials’ reasoning and believe Guinea mismanaged its planning for the Games. She gives the nation hope, officials tell her, but they’ve never given her any.

At home, the 25-year-old clutched her medals in her hands — from regional competitions, the African Games, and her Olympic qualifying event — and cried.

It was the one time Camara felt she couldn't get back up and fight.

This story is part of a yearlong series on how the pandemic is impacting women in Africa, most acutely in the least developed countries. AP’s series is funded by the European Journalism Centre’s European Development Journalism Grants program, which is supported by the Bill & Melinda Gates Foundation. AP is responsible for all content.

In the neighborhood of Hamdallaye, one of the most populous and poorest areas of the capital city, Conakry, few dare to dream of leaving. Camara's family lives shoulder-to-shoulder with neighbors. Streets are strewn with garbage. Children play in the mud.

Camara sleeps on a mattress on the floor. Her medals hang from a nail on the wall, a constant reminder of her Olympic dream.

At age 14, Camara was playing soccer — then her favorite sport — when she caught the eye of a soldier who wrestled. He was impressed with her strategy, her moves, her physique. “You have talent,” he told her, and asked if she'd ever considered wrestling. She'd never heard of it. He described the combat sport, and visited her family to earn their support.

At her very first competition, Camara won a gold medal. “It was there that I started to love wrestling,” she said.

Back then, Camara’s mother, Kadiatou Soumah, supported her, despite resistance in the community and their own family. Sports aren't meant for girls, they said. But Soumah backed her daughter with what little funds the family had. Soumah's husband stopped working when Camara was 3. Soumah had to support him, too, and Camara’s brother and sister.

It’s rare for a West African woman like Soumah to be the family’s sole breadwinner. Employment isn't easy for the 13 million residents of Guinea, a largely Muslim country where many live in poverty despite the country’s rich reserve of bauxite, the base material for aluminum, and mines for gold and diamonds. The health care system is still recovering from the 2014-2016 Ebola outbreak that killed more than 11,000 people in Guinea and neighboring Liberia and Sierra Leone.

Soumah saw wrestling as a lifeline, a means to change the family’s life. Camara won more medals. She gave up school.

Soumah sold candy and eggs out of a roadside kiosk and went door-to-door in better-off neighborhoods offering to wash clothes, clean homes and prepare meals. After working all day, she then cooked for her own family.

She even managed to buy Camara small presents to encourage her wins. Soumah was her daughter's manager and cheerleader. She gave her pocket money for traveling to competitions and picked her up in taxis at the airport, often late at night.

“It only comes with medals,” Soumah said. “Never with money. My daughter has nothing.”

As she grew older, Camara was expected to help support the family, even if it meant giving up wrestling. Instead, she continued competing and was often away training, one less person to provide.

She moved to Morocco to train via a grant from United World Wrestling, the international governing body. But when the pandemic hit, Camara and her training partners were locked down. They weren’t allowed to wrestle for 10 months, the body-on-body contact deemed too high-risk.

Camara used a wrestling term to describe what happened. “COVID blocked us,” she said.

She tried jogging in her room for exercise but gained weight. Inactivity is the enemy of world-class athletes, and Camara feared she wouldn’t be able to stay under the required weight for her 57-kilogram freestyle event.

Morocco ultimately asked the wrestlers to leave because of the virus. Camara went home, to a country without proper wrestling facilities.

Fearing the pandemic and a lack of activity, coach Vincent Aka — a former Olympian himself — moved Camara and three other West African wrestlers to his native Ivory Coast.

“Fatoumata’s situation is very special because she is more talented,” Aka said.

In April, Camara beat wrestlers from Egypt, Guam and Algeria to make the final of the African and Oceania qualifying tournament in Tunisia. She lost, but the silver medal was good enough — she'd officially qualified for the Olympics. She was on top of the world.

Aka managed to secure money for a two-week summer training camp in Italy. Camara wrestled in a competition in Sardinia — her first in three months — then went to Rome.

Camara knew where she needed improvement: “I am a bit weak on attack,” she said, working with a partner at a judo and karate center. She ducked her head under his arm and into his chest, then heaved him up on her back, flipped him over and slammed him down onto the mat. He grunted, but she wasn't happy; she practiced the move again.

She wore a T-shirt, tight pants rolled up above her ankles and no shoes — saving her best wrestling uniform for Tokyo. She lived in a dormitory, in a cubicle room similar to Olympic Village accommodations. For her, it was luxurious living.

Without the camp, she'd have been living on about $4 a day, as the Guinea Olympic committee gave her $500 to prepare after she qualified — and no plane ticket.

“If I were in another country, maybe my life would change a bit,” Camara said. “You are bringing honor to your country. The country hopefully pays you back. If the country does not, if they do nothing for their athletes, then how will others have the courage to come train like you? Because it requires a lot of sacrifice."

Before she left Rome, she had one crucial pre-Olympic task on her list. Vaccinations are encouraged for these Games, but Camara knew Guinea had no plans for her; authorities there have warned of low supply as they fear a third wave across the region.

So she went to an Italian hospital where shots were being given to homeless people, immigrants without documents and others without health care access. She joined the queue and got her jab. Aka and UWW treated her and her training partners to a pizza at an outdoor restaurant at the trip’s end.

Camara then returned to Guinea; she was big news in her country as the Games neared.

In the muddy streets of her neighborhood, young girls approached her — strong, muscular ones who want to be athletes like her.

“There are girls who are training every day," Camara said, "who come to me and ask me how I got to become a wrestler. ... If one has a bit of support and means, I know that they could be like me and like other girls who are champions today in other countries.”

But she fears they will also feel unsupported by Guinean leaders, who praised her upon her return home.

“Fatoumata Yarie Camara carries the hope of the entire Guinean nation. She is the hope of a whole people,” said Ben Daouda Nansoko, secretary general of Guinea's Olympic committee. “This is the career of this girl that shines.”

Yet, days before the Games, the budget for the trip hadn’t been approved. And she still had no plane ticket.

Soumah grew tired of empty promises and no longer believed Camara should go to the Olympics. After officials visited their home to change Soumah's mind, she relented. But she remained skeptical of vows to pay bonuses and reimbursement when Camara returned.

At night, Camara prayed: “Please make it easier for me.”

She once believed she would carry Guinea’s flag at the opening ceremony as teams marched into the Olympic stadium. Guinea has four additional athletes listed to compete who didn't qualify but instead were given places through a program that helps underrepresented nations.

Camara is world-ranked and thought she would certainly be the flag-bearer — the focus of the world’s cameras, if just for a few seconds. But Guinean officials told her she would fly to Tokyo the week after the ceremony, with the country's flag carried instead by a Japanese volunteer.

Camara told herself it was just a crack in her dream. She'd still get to compete.

Or would she? Confusion reigned over the next several days, with the government announcing it would withdraw the entire team due to “the resurgence of COVID-19 variants.” But reports theorized that the country simply hadn’t set aside funds for the delegation.

Camara grieved for her Games, but ultimately accepted that she wouldn't make the trip.

“The Olympics have always been a dream,” she said. “But this is God who controls all. I must just keep the courage, like always.”

The news of the country's withdrawal caused an uproar — nationally and beyond Guinean borders. The government reversed its decision a day after its announcement and said athletes would indeed compete. Officials said they'd received guarantees from health authorities that put their coronavirus worries at ease.

Camara and others remained skeptical that COVID-19 was ever the issue. But it didn't matter — once again, she was headed to the Olympics.

Coach Aka and United World Wrestling were ready to pay for Camara's flight, in case Guinean officials didn't follow through. But in the end, they did. On the day of the opening ceremony, Camara boarded an airplane. Gripping her seat, she smiled for a photograph.

It was too late to carry her nation's flag. And maybe her mother still disapproved.

But the flight was confirmed. She had a 48-hour trip ahead of her. And on Wednesday, Camara — ranked eighth in the world in her class — will compete in the Olympic Games.

She and Aka took photos of her ticket.

It has her name: Fatoumata Camara. Destination: Tokyo.

See the full series on how the pandemic is affecting women in Africa: https://apnews.com/hub/women-the-eyes-of-africa