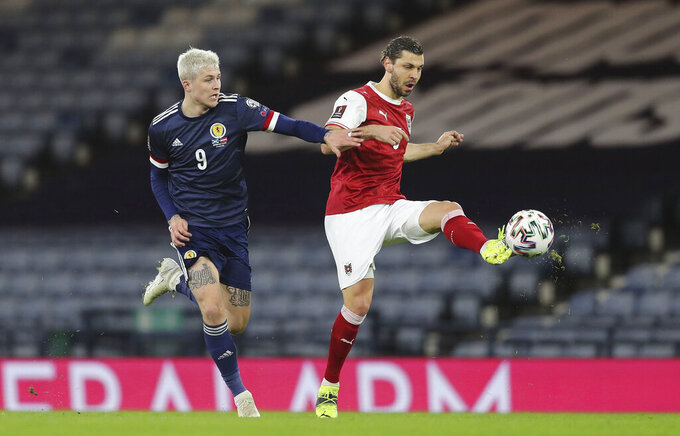 TEL AVIV, Israel (AP) — Being booed by the home fans made Denmark forward Martin Braithwaite a happy man in Israel on Thursday.

Braithwaite scored the 13th-minute opener in a 2-0 win that began Denmark’s World Cup qualifying program in front of a rare crowd of several thousand fans in this pandemic-affected season.

After Israel's world-leading vaccine rollout, the Bloomfield Stadium in Tel Aviv sounded noisier than the cavernous Camp Nou that is empty when Braithwaite plays for Barcelona.

“It was fantastic to feel that, even that fans were booing me,” Braithwaite said. “It sounds strange, but it makes me happy.”

Denmark had reason to be happy with an away win in Group F, where it is the only one of the six teams to have played at a World Cup since the 1990s. Israel’s only appearance was in 1970.

Jonas Wind sealed the win in a 67th with a close-range shot in a crowded goalmouth.

Scotland needed a spectacular overhead bicycle kick from midfielder John McGinn in the 85th to draw 2-2 with Austria in rain-soaked Glasgow.

All the goals came in the second half, with Saša Kalajdžić twice giving the Austrians a lead, in the 55th and 80th. Scotland defender Grant Hanley headed in the first equalizing goal in the 71st.

Moldova drew 1-1 at home against the Faeroe Islands.

The Danes have been to three World Cup tournaments since they, Austria and Scotland all went to the 1998 World Cup in France. All three have qualified for the pandemic-delayed 2020 European Championship that kicks off in June.

In the second round of games Sunday, Denmark hosts Moldova, Austria is at home to the Faeroes, and Scotland will play in front of Israeli fans in Tel Aviv.