Djokovic says 'pressure is a privilege' that he can handle 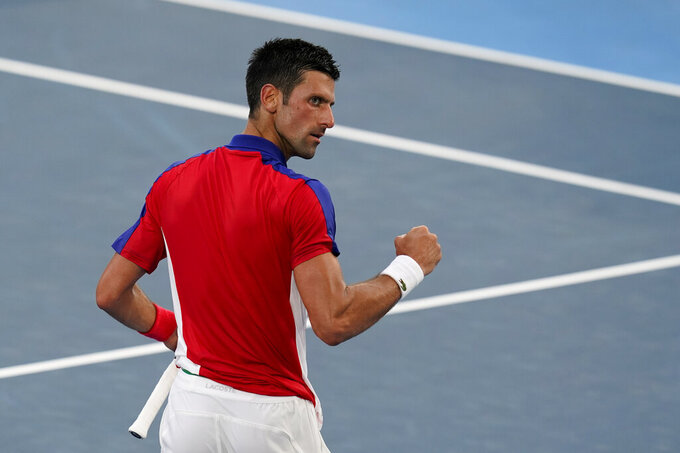 Novak Djokovic, of Serbia, reacts after defeating Alejandro Davidovich Fokina, of Spain, during the third round of the men's tennis competition at the 2020 Summer Olympics, Wednesday, July 28, 2021, in Tokyo, Japan. (AP Photo/Patrick Semansky)

TOKYO (AP) — With the topic of athletes’ mental health and pressure being discussed at the Olympics, Novak Djokovic said “pressure is a privilege.”

The top-ranked Serb was asked how he deals with the pressure of attempting to accomplish something that no man has done before in tennis: completing a Golden Slam.

Steffi Graf in 1988 is the only tennis player to achieve the Golden Slam, winning all four Grand Slam tournaments and Olympic gold in the same calendar year.

“Pressure is a privilege, my friend,” Djokovic said in answer to a reporter's question after winning both of his matches at the Ariake Tennis Park on Wednesday, beating Alejandro Davidovich Fokina of Spain to reach the quarterfinals in singles then teaming with partner Nina Stojanovic for another victory in the opening round of mixed doubles.

“Without pressure there is no professional sport,” Djokovic added. “If you are aiming to be at the top of the game you better start learning how to deal with pressure and how to cope with those moments — on the court but also off the court."

Djokovic, who has already won the Australian Open, French Open and Wimbledon this year and needs the Tokyo Games title and the U.S. Open trophy to complete a Golden Slam, said he has learned to deal with all expectations.

“All that buzz and all that noise is the thing that, I can’t say I don’t see it or I don’t hear it, of course it’s there, but I’ve learned, I’ve developed the mechanism how to deal with it in such a way that it will not impose destruction to me. It will not wear me down,” Djokovic said. "I feel I have enough experience to know myself how to step on the court and play my best tennis.”

Djokovic struggled more with mental pressure at the start of his career when he wasn't winning as much as longtime rivals Roger Federer and Rafael Nadal. He won the Wimbledon title this month to match Federer and Nadal with his 20th Grand Slam.

“Of course. It’s normal,” Djokovic said. “No one is born with those abilities. Those abilities come with time.”

Tennis player Naomi Osaka and American gymnast Simone Biles are among the Olympians who have talked openly about their mental health troubles.

Djokovic's only Olympic medal was bronze in singles from his first Olympic appearances at the 2008 Beijing Games. He then lost to Juan Martin del Potro of Argentina in his next two Games: in the 2012 bronze-medal match and the first round at the 2016 Rio de Janeiro Games.

“Rio was (a) very tough loss for me,” Djokovic said. “I came into Rio as also a big favorite, winning four out of last five Grand Slams, No. 1 in the world. So I know that feeling; it’s kind of a similar feeling now. But I’m a more experienced player; I know mentally what I need to do and how to work things around on and off the court in order to feel the best that I possible can feel.”