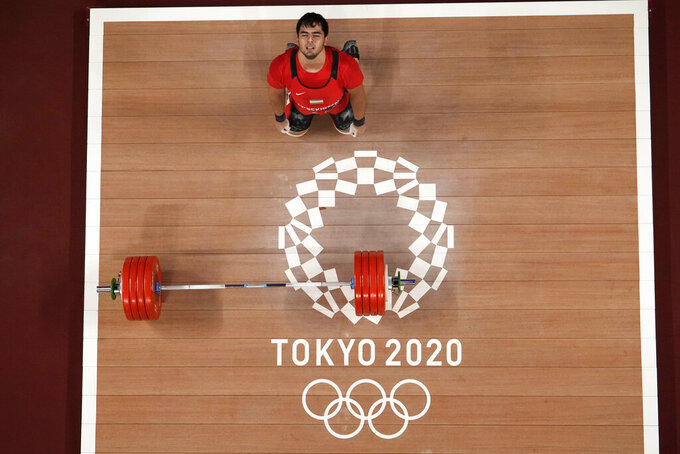 TOKYO (AP) — The world champion took a gamble, and lost.

Simon Martirosyan had two lifts for the Olympic title but failed both, handing the gold medal in weightlifting to Akbar Djuraev of Uzbekistan in the men’s 109-kilogram class on Tuesday.

Djuraev failed a clean and jerk at 234 kilograms but returned to lift 237kg and overtake Martirosyan for gold with a total of 430kg.

After Djuraev’s failure at 234kg, Martirosyan increased the weight in an apparent attempt to put pressure on Djuraev by making him lift again immediately. That backfired as Djuraev responded with a successful final lift and Martirosyan was left to attempt a 238kg clean and jerk, three kilograms more than he would have needed to secure gold.

Martirosyan had two attempts for the gold but didn’t lock his arms out on the first lift and stumbled on his second. He finished with a total 423kg, 12 less than his world record.

Djuraev dedicated his medal to Uzbekistan, which will shortly mark 30 years of independence since the breakup of the Soviet Union.

It was the second Olympics in a row that Martirosyan finished second to a lifter from Uzbekistan. He took silver in 2016 behind Ruslan Nurudinov in the old 105-kilogram category. Nurudinov wasn’t in Tokyo after serving a doping ban from 2018-20, ruling him out of most of the qualifying period.

Arturs Plesnieks of Latvia took the bronze with a total of 410kg, recovering from a comparatively poor snatch lift to hoist 230kg in the clean and jerk and edge past Russian lifter Timur Naniev.