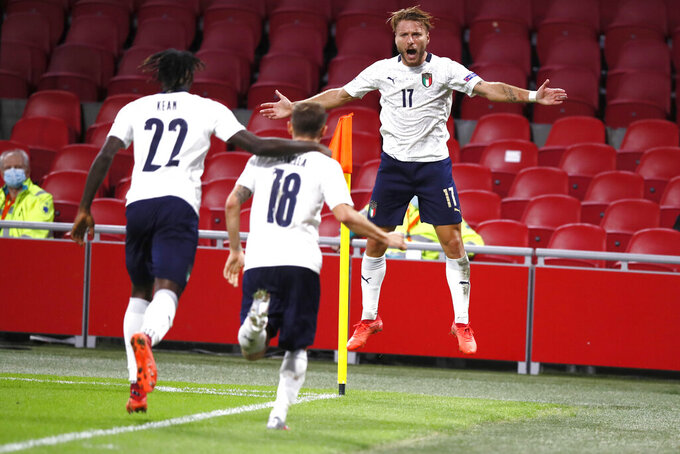 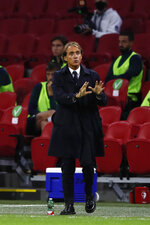 A dominant Italy performance propelled it past the Netherlands 1-0 and to the top of its Nations League group on Monday.

Nicolo Barella headed in the only goal shortly before halftime as Italy wasted chances. But the display will go a long way to helping the Azzurri put the disappointment of drawing against Bosnia-Herzegovina 1-1 last Friday behind them.

“I am happy for the mentality and the presentation,” Italy coach Roberto Mancini said. “The lads really played well, they were extraordinary.”

It was Italy’s 11th win in 12 matches although some critics tempered that feat by pointing out that none of those victories were against the so-called ‘big teams’ of international soccer.

“You don’t win 11 matches in a row if you don’t have a good mentality and a good system of play,” Mancini said. “Even if the teams weren’t of the level of the Netherlands or Germany, if you win it still means you have something.”

The only disappointing moment for Italy came when forward Nicolo Zaniolo, playing his first international since returning from a serious knee injury, limped off in the 42nd minute after a challenge by Donny van de Beek.

“Zaniolo has seriously twisted his knee. It’s hard to make a comparison with the other knee, which was operated on so we’ll have to see tomorrow,” Italy team doctor Andrea Ferretti said. “He is very worried, as we all are.”

However, Mancini said Zaniolo was calmer as the pain had diminished.

The win sent Italy to the top of League A Group 1 as Poland beat Bosnia 2-1 in the group’s other match.

Italy has a point more than the Netherlands and Poland, and three more than Bosnia.

With international football returning for the first time since the outbreak of the coronavirus pandemic, all 54 games that are taking place across Europe over six days are subject to strict hygiene measures, including the exclusion of fans. Players had to pass mandatory pregame tests for COVID-19.

The Czech Republic had to name a new squad as regular members and coach Jaroslav Silhavy were quarantined after Friday’s 3-1 win in Slovakia following a coronavirus outbreak in the team camp.

Led by David Holoubek, coach of the under-18 national team, and with only two of the 23 having played for the national team before, the Czechs lost at home to Scotland 2-1 in League B.

Israel drew at home to Slovakia 1-1 in the same group.

Also in League B, Alexander Sørloth netted two goals as Norway beat Northern Ireland 5-1 and took his tally to six goals in his past five internationals. Sørloth scored just twice in his previous 19 appearances.

In League C, Kazakhstan lost at home to Belarus 2-0, and Lithuania won in Albania 1-0.