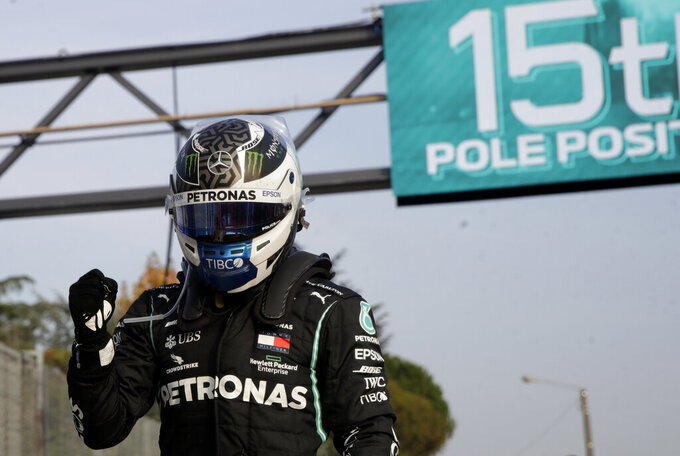 FILE - In this Saturday, Oct. 31, 2020 file photo, Mercedes driver Valtteri Bottas of Finland celebrates after clocking the fastest time during qualification ahead of Sunday's Emilia Romagna Formula One Grand Prix, at the Enzo and Dino Ferrari racetrack, in Imola, Italy. The new season starts Sunday March 28, 2021 with the Bahrain Grand Prix and ends in December 2021 at Abu Dhabi. (AP Photo/Luca Bruno, Pool, File)

PARIS (AP) — If Lewis Hamilton wins an eighth Formula One title, he will stand alone among the sport's greats. And that might be the perfect time to walk away from the track for good.

Hamilton's decision to pen a one-year contract with Mercedes sparked speculation he may call it quits when the sun sets on the F1 season at the Abu Dhabi Grand Prix in December.

Hamilton will be nearly 37 by then and, if he does successfully defend his F1 crown, the British driver will move one ahead of fellow great Michael Schumacher.

Hamilton would have nothing left to prove, with the most titles, wins (95 so far) and pole positions (98) all his.

“Of course, it is the ultimate dream, but I don’t think necessarily it will be the deciding factor for if I stay on and keep going," Hamilton said. “I think it is more when I put that helmet on, I still have that smile when I leave the garage. Will that be the case this year? We shall see. Will I enjoy it as much? We’ll see."

The season starts Sunday in Bahrain after the traditional season-opening GP in Melbourne, Australia was postponed until November because of the coronavirus pandemic.

As brilliant as Hamilton was last year, he ended the season feeling drained after contracting the virus and expending huge energy in the fight against racism, his push for greater diversity in motorsport, and his call for better human rights in some countries where F1 goes.

It all started when Hamilton and most drivers took a knee against racism at the Austrian GP in July, when the delayed 2020 season began. While others appeared to fade in their commitment, Hamilton continued to hammer home the need to fight.

Hamilton, who was knighted in year-end royal honors, has the same mindset for the season ahead.

“That’s my driving force this year. To make sure that we continue to push for accountability, and on top of that hopefully I can deliver good performances," he said.

F1's ‘We Race As One’ campaign was among the themes of 2020, he said, "But (more) action is needed this year. We’ve got to make sure that we continue to have that conversation.”

Hamilton said there were positive discussions between drivers at pre-season testing and F1's president Stefano Domenicali, who "has taken the time to sit with us all and be open."

On the track, preseason did not go well for Mercedes.

It gave rivals hope that a dominant series of seven straight drivers' and constructors' championships may at last be under genuine threat.

Red Bull star Max Verstappen picked up where he left off after winning last year's final race in Abu Dhabi in style and appeared very confident in testing.

“I’d say Red Bull are ahead on performance. They are the class act. Are we going to have a close season? I would say so,” Mercedes strategy director James Vowles said. “Red Bull are a fierce adversary, they’ve got a strong package and clearly came out of the box very, very quick.”

Red Bull has a stronger lineup, too, with Sergio Perez replacing Alex Albon and bringing with him nearly 200 GPs and 10 podiums, including a second place in Turkey followed by a superb win at the Sakhir GP last year.

Hamilton is wary of Red Bull's threat, saying "It's going to be a long battle with them.”

Verstappen was Hamilton's main threat on race days last season, despite having a slower car.

The early signs are that the 23-year-old Verstappen will add to his 10 GP wins.

“It has definitely been the best preseason. The car felt nice to drive, which I think is always very positive," Verstappen said, referring to Red Bull's reliability issues last year. “But it doesn’t give you any guarantees. We’ll find out through the first race weekend where we are."

Valtteri Bottas finished 124 points behind fellow Mercedes driver Hamilton, compared with 87 the season before. The margin of defeat last season was even more emphatic considering there were four fewer races than in 2019.

The 31-year-old Finn also has a one-year deal.

It may prove to be his last chance to topple Hamilton, with Verstappen waiting in the wings for a possible future move to Mercedes.

Two-time world champion Fernando Alonso has come out of F1 retirement after missing the past two seasons and returns at the age of 39 — which is still two years younger than Alfa Romeo driver Kimi Raikkonen.

Alonso won titles with Renault in 2005 and '06. He will be driving for Alpine, which is Renault’s rebranded name. Three drivers will be making their F1 debuts, including Michael Schumacher's 22-year-old, son Mick, who won the F2 title last season.

He will be joined at Haas by newcomer Nikita Mazepin, while 20-year-old Japanese driver Yuki Tsunoda debuts with AlphaTauri after replacing Daniil Kvyat.

Vettel's Ferrari spot has gone to Carlos Sainz Jr. after he left McLaren. Sainz was replaced by Daniel Ricciardo, who quit Renault.

Williams driver George Russell showed everyone what he can do in a leading car when he replaced Hamilton at the Sakhir GP. A stunning performance almost led to a victory in a chaotic race and highlighted his potential.

The 23-year-old British driver is in his final season with Williams and has been tipped for a Mercedes seat in 2022, possibly replacing Hamilton if he leaves F1.

This season could see history made before a new dawn in F1.