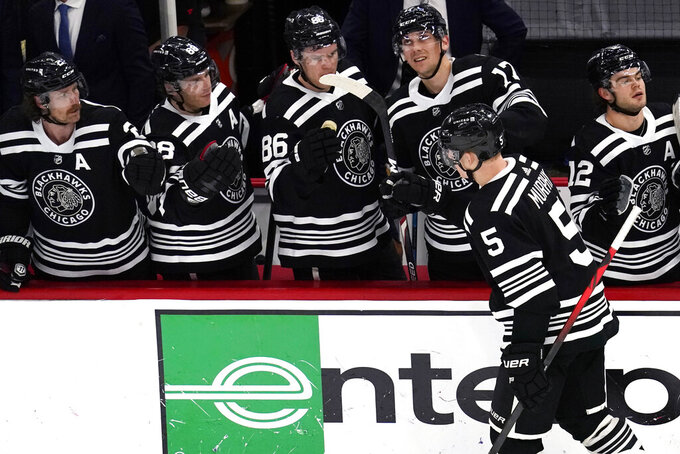 Chicago Blackhawks defenseman Connor Murphy (5) celebrates with teammates after scoring a goal against the Florida Panthers during the second period of an NHL hockey game in Chicago, Saturday, May 1, 2021. (AP Photo/Nam Y. Huh)

CHICAGO (AP) — Anthony Duclair had two goals and an assist and the Florida Panthers beat the Chicago Blackhawks 5-4 on Saturday night for their third straight win.

Aleksander Barvok scored his team-leading 25th goal and had an assist. Nikita Gusev and Owen Tippett also scored as Florida improved to 8-2-1 in its last 11 and remained two points behind first-place Carolina in the Central Division.

Duclair has four goals in his last three games, and six goals and nine assists in 11 games since returning from an upper-body injury on April 13. Barkov has seven goals in seven games.

Duclair, Barkov and other Panthers forwards are peaking with hot production as Florida rolls toward the playoffs.

“Things are clicking right now, not only for me, but the whole team,” Duclair said. “I guess the puck is just finding me."

“The Duke,” Quenneville said. “It was one of those nights where he had the puck in some interesting places.”

The Panthers (34-14-5) are playing well no matter where they skate. Florida concluded its road schedule in the pandemic-shortened season at 17-9-2.

“I guess we just like to be on the road,” said Barkov, who added he's been working on his shot this season. “We just try to play the same hockey we do at home."

Barkov, Duclair and Tippett connected in a 1:06 span late in the second and early in the third period to put the Panthers back ahead after Chicago had tied it at 2. Chicago’s Connor Murphy and Alex DeBrincat scored 52 seconds apart late in the third.

Kirby Dach scored a power-play goal midway through the third and Dominik Kubalik connected with 18 seconds left as the Blackhawks pressed with goalie Kevin Lankinen on the bench an extra attacker. But Chicago lost its fourth straight (0-3-1) and fell eight points behind fourth-place Nashville and the final playoff spot in the Central with five games left.

We want to play just as hard these last five games as we would if our season was on the line," Chicago coach Jeremy Colliton said. “We’ve had a lot of positives here over the season, but it would be disappointing if we let these five games slip away as an opportunity to continue to develop and move forward.”

The Panthers took a 1-0 lead in the first period on Duclair’s second-effort goal 7:54 in. Duclair slipped free of defenseman Wyatt Kalynuk, cut to the slot and beat Lankinen with a low wrister.

Gusev made it 2-0 at 2:30 the second with his first goal in nine games with Florida. He skated unchecked from the right corner to front of the net and a backhander between Lankinen’s pads.

Murphy and DeBrincat tied it at 2 the late in the second.

With Radko Gudas off for holding, Murphy beat Bobrovsky from the point on a screened shot with 4:41 left in the period and one second remaining on the power play.

DeBrincat tied it from the slot, after taking Adam Gaudette’s feed from left wing after Gaudette had faked a badly beat Gudas.

Barkov put Florida back ahead it 3-2 with 6.8 seconds left in the second, breaking in alone a firing a rising shot over Lankinen’s shoulder.

Duclair skated in down right wing, deked Lankinen to the ice and made it 4-2 just 28 seconds in to the third. Tippett, alone in the slot, fired in shot 31 seconds later to up the Panthers lead to 5-2.

Fans, termed “friends and family,” attended a Blackhawks game for the first time in the pandemic-shortened season and sat in the United Center’s lower bowl. Starting May 7, the city and state will allow the arena to accommodate 25% capacity for Chicago Bulls and Blackhawks games.

Blackhawks: D Calvin de Haan (hip) missed his fourth game. …. D Ian Mitchell returned after sitting out five games and fellow rookie D Nicholas Beaudin sat out. Colliton said the 22-year-old Mitchell, who started strong this season, needed time in the minors and the on the taxi squad “to get his swagger back."

Panthers: Host Dallas on Monday, the first in a three-game homestand to close the regular season.

Blackhawks: At Carolina on Monday to open a three-game series.