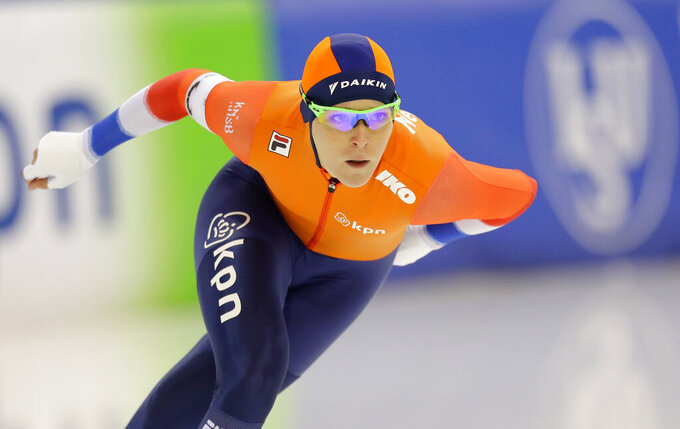 FILE - The Netherlands' Jorien Ter Mors competes during the women's 1500 meters race of the speed skating World Cup at the Minsk ice arena in Minsk, Belarus, Saturday, Nov. 16, 2019. Mors has retired from the sport. Ter Mors was the first female athlete to win Olympic medals in two disciplines at the same Winter Games. The 32-year-old speedskater won three long track gold medals and one short track bronze medal while competing at the 2014 and 2018 Olympics. (AP Photo/Sergei Grits, File)

Over a 16-year career, the 32-year-old speedskater won three long track gold medals and one short track bronze medal while competing at the 2014 and 2018 Olympics. She also won multiple world and continental titles.

“The real fire no longer burns,” ter Mors told Dutch broadcaster NOS on Sunday at the Dutch national championships, where she competed for the last time. “And you need that if you want to skate hard and compete for victories.”

After the 2018 Pyeongchang Games, where she won gold in the 1,000 meters in long track and bronze in the 3,000-meter relay in short track, she underwent knee surgery which prevented her from training on ice for nine months. She needed three years to fully recover.

Ter Mors had hoped to compete at her fourth Olympics next month in Beijing with the Dutch team but she did not make the cut in qualifying.

Ter Mors started speedskating at the age of 11 and joined the national team for the 2010 Vancouver Olympics. She was often injured with ailments that kept her off the track for long periods.